Be you a seasoned Jungle veteran used to your laners dying at the one-minute mark and flaming you before your camps even spawn, or if you’re a strapping new player or other role convert, there’s a lot of nuance to the Jungle that’s going to take time and effort to master. To help us along that pathway, I was able to talk to Matthew "Akaadian" Higginbotham, Dignitas QNTMPAY's Jungler, about some Jungle pathing dos and don’ts. So, let’s dive in!

A lot of your initial route depends on your Champion. Some characters spike at level 3 and want to be really active within the early game, while other characters want to farm a bit more.

This is a very aggressive pathway that often lends itself to those early spiking Champions. Xin Zhao, Jarvan, Lee Sin, and Elise, to name a few. This route can be switched depending on sides and definitely accelerates your progress towards the opposite side of the map.

You can do this kind of route on any Jungler, but early game Junglers like Xin Zhao benefit from this since they duel harder at level 3. But, you typically opt for this route if you’re on this type of Jungler and have a good setup towards whatever side you want to pressure. 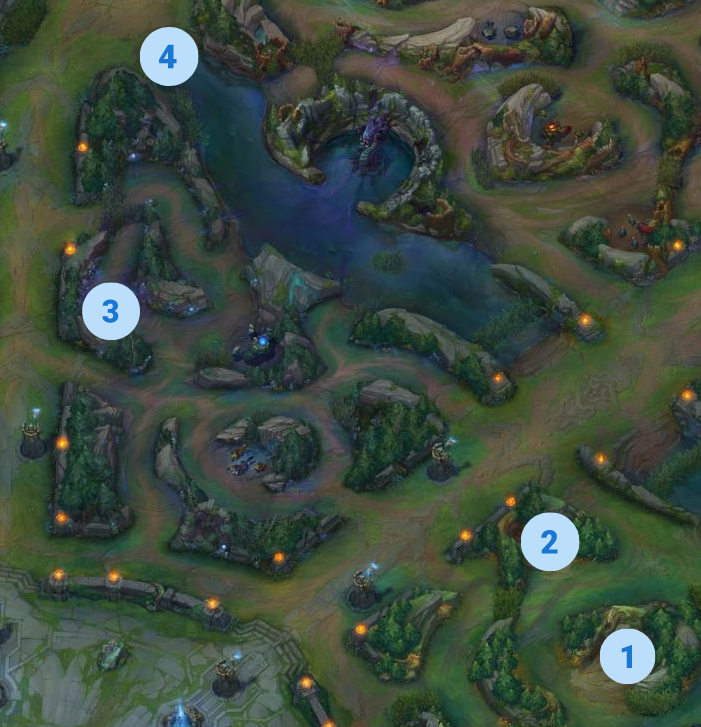 The downside to this route is, if you’re sussed out by enemy vision, if you gank window closes, or if it doesn’t pay off at all, then you’re at a massive tempo disadvantage when it boils to farming. Aggressive Junglers, like those mentioned above, love this route for their early impact. But, many Junglers at this time prefer some of our later clearing routes. So, if you don’t get the most bang for your buck off your first gank, then it’s likely you’ll be counter Jungled and set back in tempo.

The three camp is also one of the best strats for ganking Mid. You can clear one side of your Jungle like Red-Krugs-Raptors into a Mid gank before transitioning over to clear your Blue side, for example. If there’s no vision, you’re likely going to get a Flash or kill for the time, especially if your laner has setup. 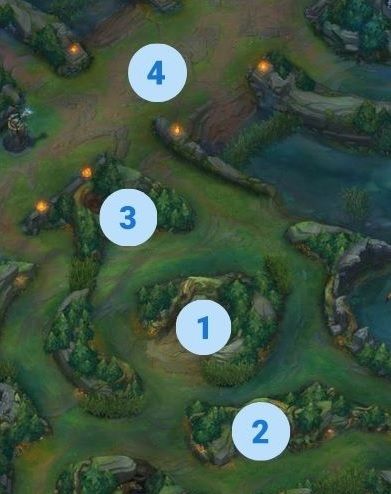 This is probably your most standard route. Regardless of what Champion you’re playing, you can run this route, reach your levels, and then look to make a play where you can, or just go for Scuttle. Though Champions like Viego or Diana, Champions who spike closer to level six, will opt for this most every time.

As mentioned, the Four Camp Clear is our best route when we don’t really know how to gauge the pathing of the enemy Jungler, or what best suits our given situation. This route gets you to your levels safely, allows you positioning towards the side of the map you feel most impactful on, and gives you the option to reverse clear your way back down or recall back for an opposite scuttle take if you should not have priority.

But, when coordinating with teammates, this route, especially on Junglers like Viego that have excellent Jungle sustain, can be taken as an aggressive route that you can look to invade off of. First, you’ll need lane priority from whatever side you are pathing towards. Second, you’ll need to ping your laners to be aware of the play you’re attempting. Third, you’ll need to get the drop on the opposing Jungler. 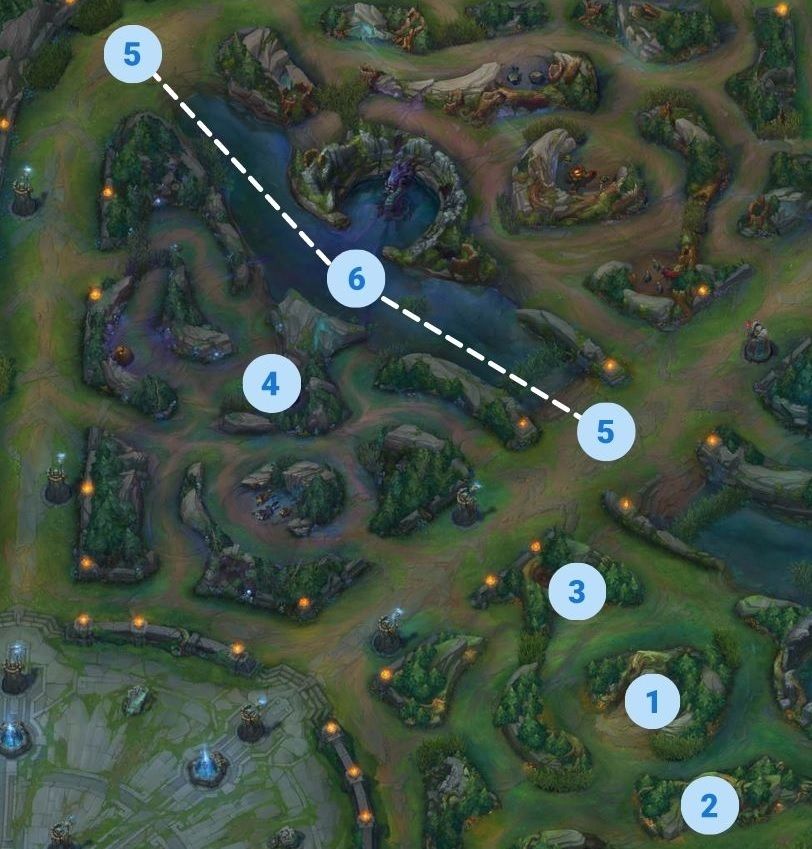 Why look to be aggressive? Well, you’ll be at a natural power spike of level three after your first four camps, if you sustained well through the exchange and think you have tempo/priority, making a move here can literally shove your opponents off of their vital last few camps, or bug them down where they can’t contest the Scuttle Crab. Scuttle Crab is a solid chunk of change to get in the bag early, and if you can claim tempo by getting one or both of these crabs out of the pockets of your opposing Jungler, you’re likely going to be able to be more aggressive with them as the game rolls on.

The Five Camp Clear is great for matchups where you want to stifle the benefits of a Full Clear, but still reverse the map quickly for pressure. Aggressive Junglers like Xin Zhao, Volibear, or Jarvan do well on this route because they have excellent tools to duel with, and your goal on this route is to cause conflict at the scuttle.

So, against level 6 Junglers like Rengar, Evelynn, or Nocturne, who want to avoid contact so that they can push to 6 for their highest impact, the Five Camp Route starts by predicting what side they’ll start on. You mirror what side you believe they’re going to start, and then you clear towards looking to contest Scuttle. Ping your teammates to get priority, and when your opponent comes, your overwhelming early game pressure will force them off. At this point, you may net a kill from greed, or you may even be in position to make a play on the other laners that may have roamed over, regardless, this route opens up to level 3 conflicts at Scuttle. 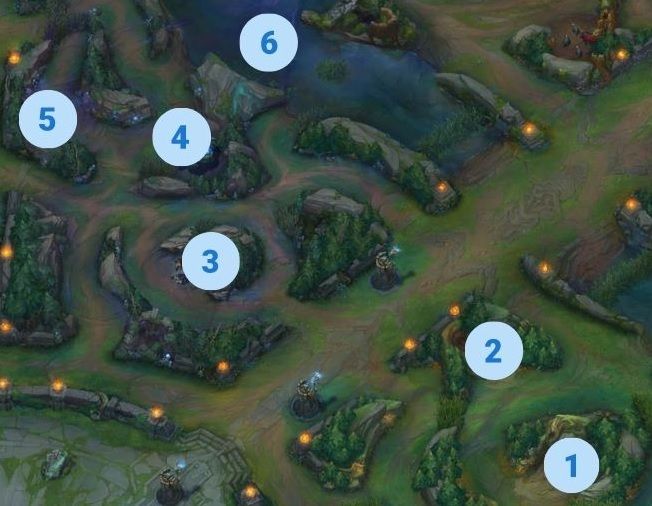 But, even if you are facing off against a Champion that spikes harder at level 6, while you’re a more early game focused Jungler, it’s always best to consider the strength of your laners while moving in. If you’ve got a Kassadin or a Kayle, for example, while you might have the tempo to get to the Scuttle before your opponents, if your allies are shoved in and can’t help you pressure back, then you’re likely looking at an overall loss of tempo by not factoring in your early game priority.

The Full Clear is a route that has you clearing six camps, and hopefully ending off in one of the Scuttle Crabs before reset. There’s little ganking intention behind this route due to the fact that most Full Clear Junglers prioritize reaching level six as soon as possible. Skarner, Evelynn, Rengar, Nocturne, for example all have massive spikes and their methods of approach diversify come level six. So, getting back to the opposite side of the map and clear your way back around after your initial clear is the goal.

But, even if you’re on a Champ that does want to prioritize level six, don’t be hesitant to punish free mistakes. Oftentimes players will play aggressively when they see a Farming Jungler, and that sometimes opens them up for easy ganks.

For those that like to be cheeky, the option to steal a buff at level one is always there. However, this start comes at a very high risk to you and the state of the early game should it not pay off.

I typically don’t like starting an enemy’s buff or counter-jungling in general unless I know it’s free. With the way experience and timers are, you don’t really want to be resetting the enemy’s camps for them. Especially on the first clear. And a lot of the success depends on how much pressure your teammates can get. So, I generally avoid this.

As mentioned, to pull it off successfully takes a few things. One, your Champion needs to have a healthy and fast solo-clear. When it comes to counter-jungling a buff at the start of the game, you can’t really expect your laners to void their need for gold and exp in favor of yours. Two, your laners need to be able to get priority quickly. Often, wards get dropped in the entryways to the Jungle these days either by the enemy Jungler or a friendly teammate. If these sneaky wards catch you on the move out or in, the enemy team may make moves to collapse on you. Or, if the enemy Jungler’s clear is faster than yours, they may opt to counter-jungle you in return which can really limit the flow of the map and initiate a state called ‘Vertical Jungling’ which can be awkward for many in Low to Mid ELO Solo-Queue to play around.

The Traits of a Gankable Lane

When the Draft folds out and you’re planning your first route and which side you want to move towards, consider your options as to what is available to you in terms of setup. Renekton, for example, is a very gankable laner since he has the double-dash into stun that makes him both excellent at setup, and excellent at diving a weakened enemy. Leona, on Bot Side, offers a ton of early game CC from level three to six, taking advantage of what she provides can really get the tempo going for you.

t’s a two way street too. You have to factor in your own Champion on when it comes to ganks as well. Someone like Lee-Sin, for example, has a lot of mobility and can force ganks to happen.

So, consider what your Champion brings and what your laners bring when considering your initial route. Additionally, factor in the mobility of your enemy. If they’re on something like an Ezreal, Fizz, or Camille, their slipperiness should factor into your gank setup and success.

I always like to end my pieces off with a suggestion of Champions to pick up should you be looking to try whatever role we’ve covered. This time around, Akaadian has his own suggestions.

I think when you’re looking for starting Champions or pick-up and play Champions, you’re talking about Champions with relatively low skill expression. So, basic characters like Trundle, Xin Zhao, Karthus, these types of characters don’t demand a whole lot out of you and are easy to play. Champions like Lee Sin and Nidalee take a lot of time to become good at and comfortable on. Straightforward is the goal in starting out.

And there you have it folks. A bit of info about the top routes in the game right now! As well as some do’s, don’ts, and Champion suggestions to boot for all your Starter Junglers out there! I hope you found this information helpful and enlightening! Thanks to Akaadian for taking the time out to help with the piece!

If you want to see more of the most handsome man in the LCS, you can find him at these socials: 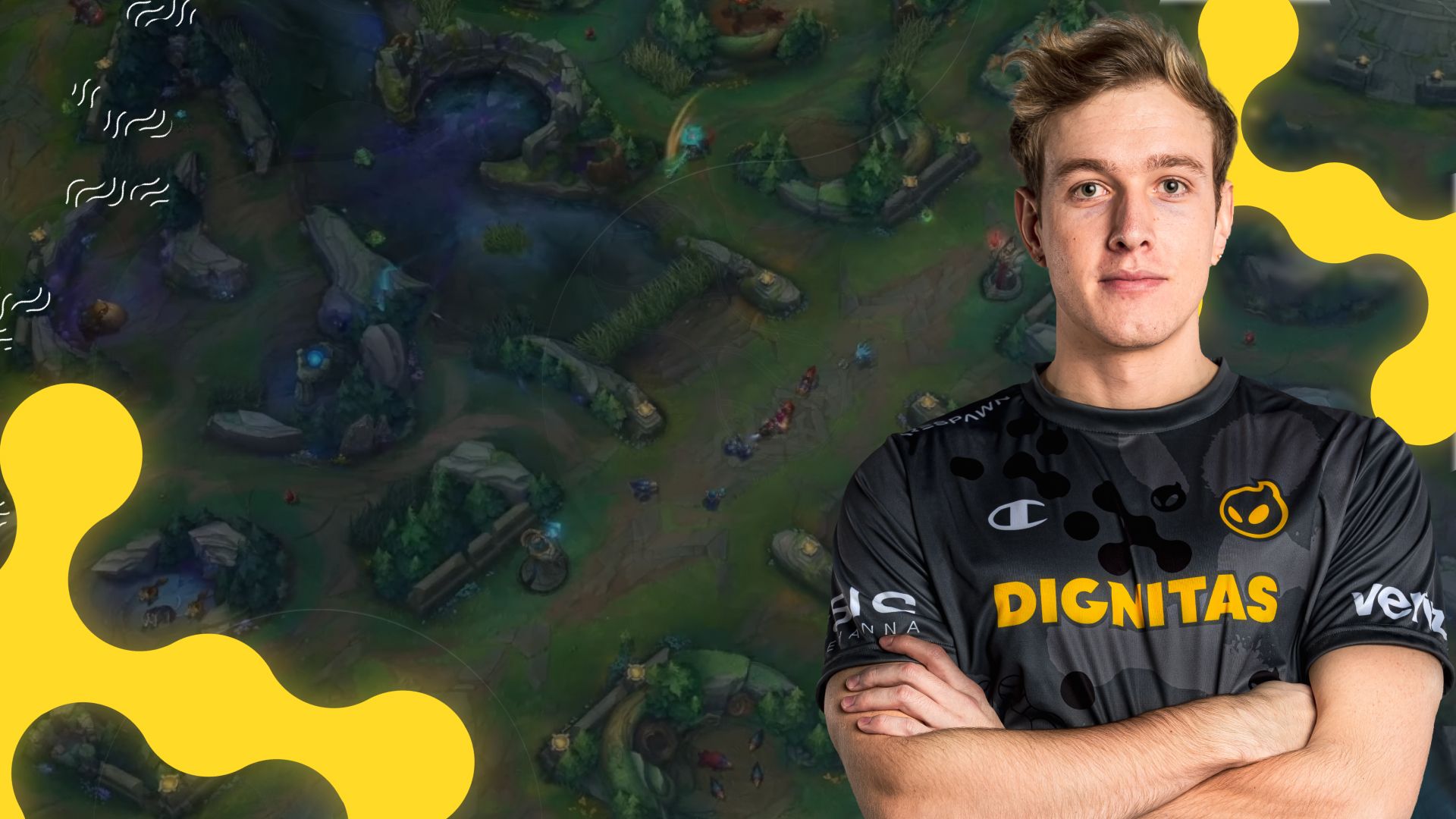