We’re approaching the mid-point of Season 12 in League of Legends, and things have surprisingly been pretty consistent for Support players out there. Minus one or two Champs falling or rising between patches, Supports have generally performed as expected through the early goings and into this stretch of the season, and honestly, they’ll likely stay the same. There’s a good mix of Tanks, Mages, and Enchanters all present in the Solo Queue Meta, and barring any sudden change of directions, things look to hold out until nearing the world's patch.

However, that doesn't mean every pick is equal, and I've sat down with Dignitas QNTMPAY's Support Vincent "Biofrost" Wang to look at the available support picks and we used his expertise to create a tier list for this point of Season 12 to help you in your Solo Queue endeavors. 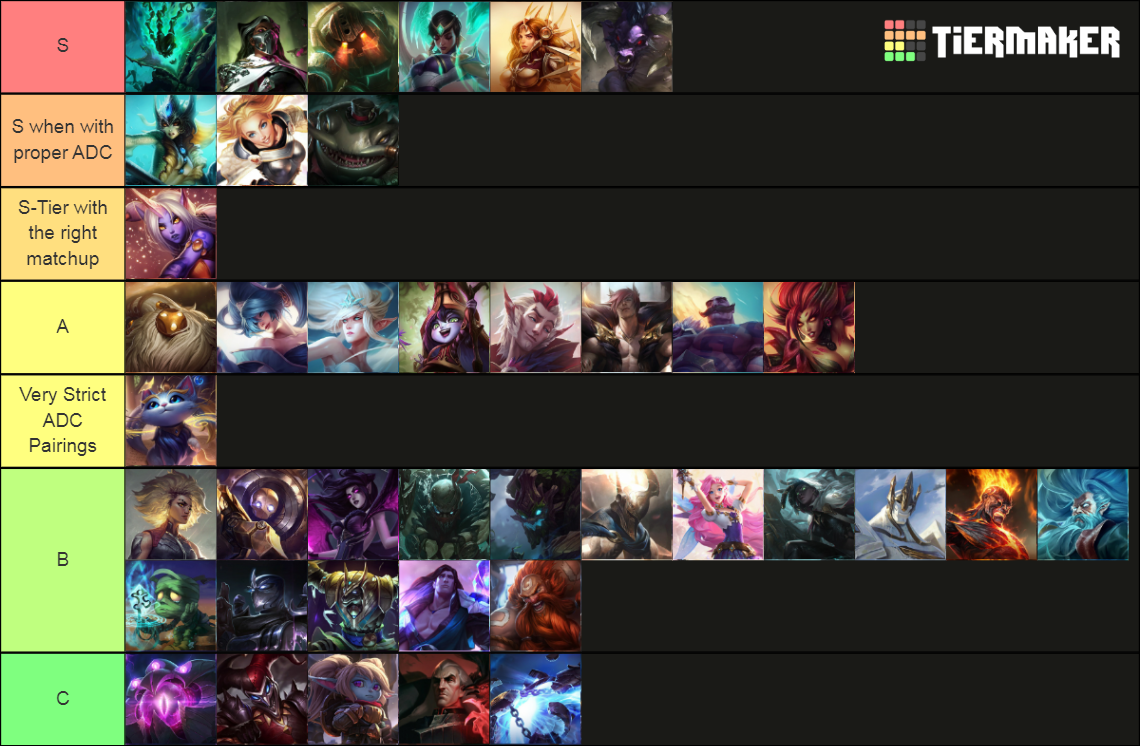 Starting first with the S-tier, we’ll work our way down. Do note that none of these are in any particular order, but we will discuss them from left to right! S-tier picks are simply the best of the best. They bring either a lot of everything to the table (Thresh), have extremely high skill expression that can be dominant once mastered (Renata/Karma), or are simply vying against each other to be the best at their given duties. (Naut/Leo/Ali). A common theme in this tier is engage and oppression, showing how high the ability to dictate the lane matters for a Support in Solo-Queue.

Biofrost: “Thresh first, this quintessential pick did receive some nerfs a while back that made him a bit less effective, especially in unskilled hands. But he’s still really good overall. Renata is an S-tier pick due to solid laning and great scaling. She does have a high degree of skill to her, so if you’re not super apt at her. You’ll fall short. Nautilus is just really good right now for Solo-Queue, he’s point and click CC and is probably the best engage Support that you can play right now due to just how easy he is. Karma finds her way into the S-tier as well just due to how strong of a laning Support she can be. She, like Renata, requires a lot of familiarity to bring out her full potential. And, if you are just playing her blind, you’re likely going to fall short in comparison to other picks.

Nami, Lux, and Tahm are amongst our picks that need to be with a particular support, or style of Support to really shine. Nami, when paired with Lucian, is an S-tier pick. Otherwise, she hovers around the A-tier when being picked up with any other ADC. Lux is an S-tier pick when taken with Caitlyn. And Tahm is S-tier when taken alongside Jinx or Aphelios.

As an honorable mention to the S-Tier, Soraka has the potential to be in S-tier. She’s very close to breaking in, but she requires a good matchup to really break through as that sort of pick, if she gets that matchup she’s there. But she’s otherwise an A-tier pick.”

For some further context, these pairings each have particular synergies that bring out the most of both the Support and ADC. In the case of Lucian-Nami, Lucian’s early game ability alongside Nami’s damage amps, higher base damages, and slows really allow Lucian to fully combo out his kit in lane. Lux has come to surpass Morgana as Caitlyn’s classic partner since her binding is less restrictive and her damage is far more impactful in lane. And Tahm genuinely makes the most out of any hyper-scaling focused pick, and with Jinx and Aphelios being the premier hyper-scaling ADC in Solo-Queue right now, he fits right in as their natural partner, utilizing his ‘nom’ to peel and protect them so they can get excited or 200-years enemies after initial bursts.

When looking at the A-tier, you again have particular standouts that are just the best within their given niche of Support play (Bard/Zyra), an entire class of Champions (Enchanters), and two solid options for frontliners that possess a different playstyle than our S-tier picks (Sett/Braum). Champions in this tier might have particularly surprising win-rates through low ELO brackets, but unlike the Champion in the S-tier, they have far less ability to dictate what is happening in their lane. Across the board, our A-tier picks rely on the mistakes of their enemies moreso than they take advantage of any particular aspect of their own kits. A common theme amongst this tier is disengage.

Biofrost: “A-tier picks. Bard is also very close to being an S-tier pick but falls short from the category. He’s probably the best roaming Support that you can play right now, but he does require skill to execute so that makes him a little more inconsistent.

Sona through Lulu all have the potential to be pop-off picks and of course they scale really well. But they struggle against hooks and more aggressive matchups. Looking at Yuumi. For her to be in A-tier, she requires a very strict set of ADCs. When paired with Ezreal, Lucian, MF, or Xayah, she’s very strong. But, when paired with any other ADC, she’s pretty much a D-tier pick.

Sett and Braum are solid A-tier picks in my eyes. They certainly aren’t as good as the S-tier picks, but they have solid options. Especially when played into picks like Nautilus or Leona where they can operate as counter-engage pieces. Zyra is probably the best Mage support you can play just because of how dominant her lane phase is, and due to the fact she brings more than just damage. So, in her better matchups, she can be really oppressive.”

As we drop down into our B-tier, here’s an excellent demographic of picks to highlight our earlier preface on. If you’re particularly good at any of these Champions, then they can be S-tier level picks. Champions in this bracket fit mainly into either certain styles of comps, or match well against very particular picks. There’s no common theme amongst them like the S or A-tiers, so again, this bracket all boils down to matchup, comps, and player skill, which can be very high variance in the vacuum of Solo-Queue.

Rell and Blitz fall very much into the category of consistency issues. Rell matches extremely well against the popular Tank picks by being able to shred their defensives and lock them down, while having good pairings with the popular ADC picks right now. Blitz flips the script by having very excellent matchups against Enchanters and Mages, since he can exploit their lack of mobility with his abusive hook. But both are very boom or bust. Where Alistar and Leona suffer from being ‘too’ all-in, Rell takes that and amps it to 11. A Blitz that can’t hit a hook, has no impact after that. So, players on these picks have to be familiar and impactful in their recognition and ability to influence the lane.

Biofrost: “Morgana is B-tier simply due to the fact that her Black Shield is always going to be powerful but she’s otherwise really weak overall. She’s a good pick into some of the melee Supports, but her matchups are too conditional for her to be higher. Pyke is like Bard, but even less consistent, requiring more Champion mastery. Maokai just hasn’t been as impactful since the sapling nerfs. Pantheon’s changes were good, but more focused at other areas of his play and didn’t do much for him at Support. Seraphine fits into certain comps but is pretty inconsistent beyond her ultimate in those. Galio and down through the rest are generally worse versions of other Champions that are listed higher.”

Looking now at our C-tier, there’s little much else to say than these are very fringe selections or fully damage oriented picks. Shaco Mains can off-role Support and still abuse the tricks of their Champion in the lane, but again this conversation boils down to Champion mastery more than anything else. Poppy’s ability to impact a lane is very conditional, and she’s really only taken in situations where there are excessive dash/dive threats for the ADC to deal with. Vel’koz and Xerath are all damage minimal utility for their teams. Swain also fits into the damage-focused role and has to play even less safely than these longer-range Mages to accomplish what he wants.

Overall, there weren’t any picks that we could say belonged in the D-tier. To drop to a D-tier Support pick would pretty much mean you have to bring nothing that a team would find valuable to the table, and most Champions in the game can do something to make themselves function at Support.

As we wrap things up, I’d like to thank Biofrost for sitting with me and helping me craft this list and offering his insights. We hope this list offers you some perspective on your Champion pool, and we hope it helps you improve your course for the remainder of the Season!

If you’d like to check out more Biofrost, you can find him at these social links! 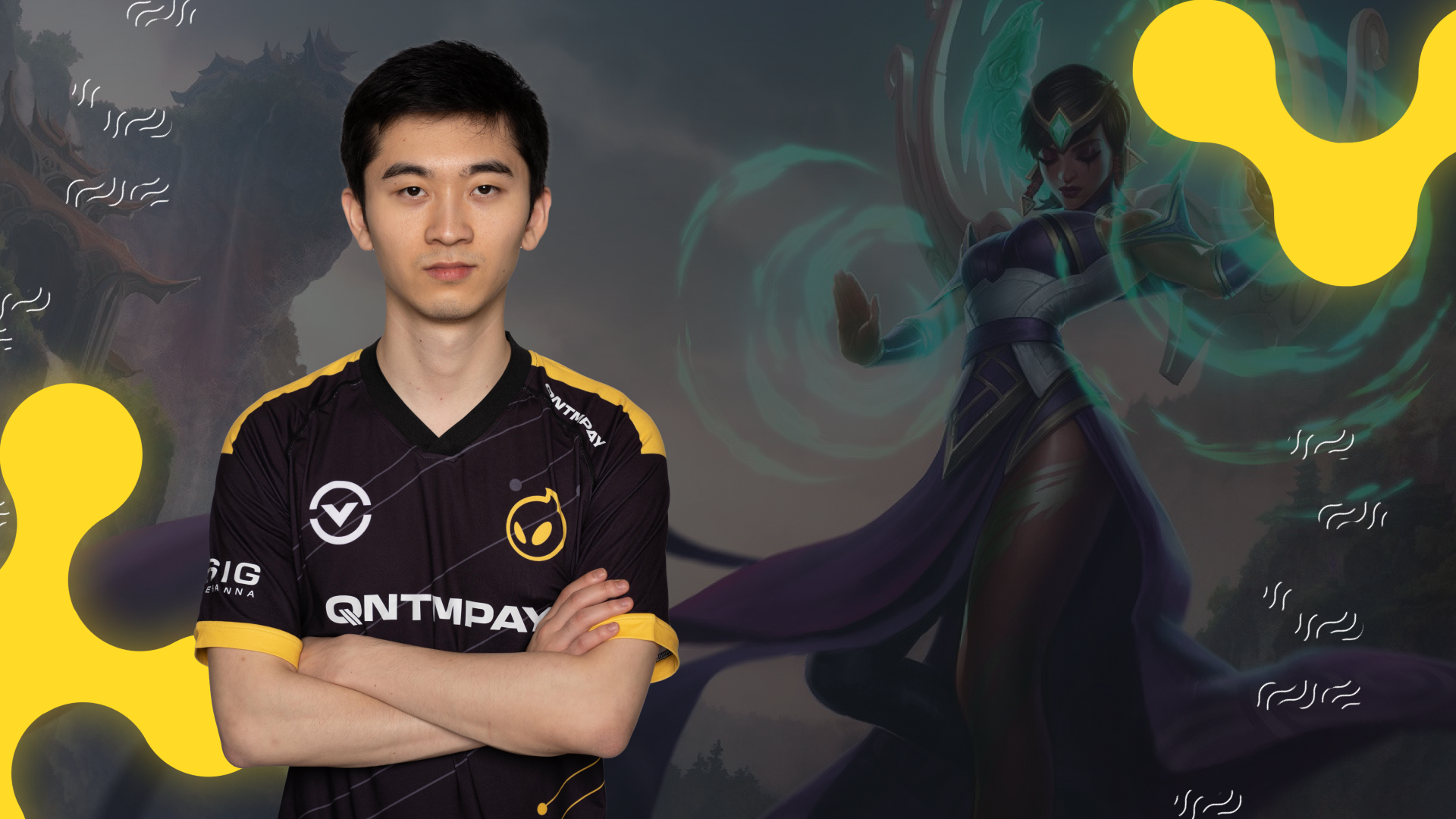