One of the key elements of bringing a League of Legends champion to life is their voice and I have been given the opportunity to talk to the voice behind Taliyah - the most recent edition to the Fields of Justice - and her name is Erica Lindbeck. Though she hasn’t been voice acting for very long she has already accrued several large roles in anime and videogames such as Kaori Miyazono in Your Lie in April and Uzume Tennouboshi (CPU Orange Heart) of the Neptunia game series and she's even the new voice of Barbie. I got to ask her about her experiences in voice over and what she thought of doing voiceover work with Riot Games.

Erica: I’ve been acting pretty much my entire life and I’ve always been a really big fan of anime and video games. I used to play a ton of video games but not so much anymore which is really sad. I went to college for theatre (UCLA) and the last year we were there they brought some voice over people over and I started to think that voice over was something I could do because I really enjoyed it and was passionate about it. I ended up taking some classes with Crispin Freeman who is now a good friend and mentor of mine. The classes with him went very well. The guys who made my demo reels (a kind of calling card) walked me into his agency and the rest is kind of history. That was all two years ago.

What was the road to your professional voice acting career like?

Erica: I didn’t do any fan stuff or get into the indie game circuit. I got really lucky and got a really good agent (Richard Tatum) who cut my demos and walked me into this agency. I had nothing on my resume and was still in college. I auditioned for eight months with them and I started booking big jobs and anime. It happened really fast for me I was very lucky. The biggest thing I booked about nine months in was the voice of Barbie. When I went in I didn’t realise the audition was for the new voice of Barbie. My first voice role however was in September of 2014 which was a lead role in an anime. It was a bit of a trial by fire. I was just thrown in there, happened to be in the right place at the right time. I did have the acting training though. Voice over is kind of a strange medium but acting is just acting, if you can figure out how to translate it then you’ll be fine.

Of the characters you’ve voiced do you have a favorite?

Erica: Oh my gosh, so there’s this really sad anime series I was in called “Your Lie in April”. I play Kaori Miyazono in it and I love her. It was so heart wrenching to do that show but I really loved doing it. I like playing Barbie as well, she’s really cool. I loved Taliyah! I really did because she was a challenge for me. When I went in I thought there was no way I’d book the role. She’s a really interesting character because she’s naive but not at the same time which I think is really interesting. When you see a fifteen-year-old discovering all this new stuff you think “she’s bright eyed and bushy tailed” and Taliyah is not really like that so that was a challenge for me, but I love all the roles I play. I really loved playing Nori of The Sleeping Knights in Sword Art Online. Video game wise a lot of that stuff I can’t talk about. I’m in the new Call of Duty: Infinite Warfare, not in the trailer but I’m doing something in it. I love everything.

When you auditioned for the role of Taliyah were you aware how large a game League of Legends was?

Erica: I was! First of all, I’m a total nerd and go to tons of conventions. Also, all of my friends are League champions! Sarah Williams (voice of Jinx) was my roommate up until two months ago. Laura Post (voice of Ahri) is also a dear friend of mine. I know a lot of League voice actors. Trundle (Josh Tomar) and I was literally sitting in the living room of Jason Wishnov (voice of Nocturne) yesterday. I also have a bunch of friends at Riot. I played DnD in college with Peter Quinn before he even worked at Riot and now he’s been working at Riot for years. I had toured Riot before I even auditioned for a champ so I know how huge it is in the gaming community.

Erica: If there’s one thing I’ve learned about Riot over the course of working with them it’s that they care about the people that play the game so much. They are trying their best to do what’s best for the players. They really take into account what people say. They are incredibly active on the forums and on Twitter. I love how interactive they are with their fans but I think they’re just good people and they care about what they’re doing and what they’re creating leaving no stone unturned and no corners cut. They are fabulous and I loved working with them.

How did working with Riot compare to other recording sessions?

Erica: I think it was a more intensive process because I think we had a grand total of four sessions for Taliyah over months. Usually it’s just one where you just go in and do the session and it’s over. For this one we did a preliminary session and I didn’t even know there was going to be more. Then I got called in for another one and then another one. One of those extra ones was for recording Taliyah’s login theme. That was something that I sort of had to audition for mid session. During my second session they were like “Hey, can you audition for this song that Taliyah sings?” so I just said “Okay!” because I do happen to sing. It was definitely more intensive. Taliyah’s character evolved as we went too. It wasn’t just like “This is what we want Taliyah to be like” it was more like “these are our ideas about what she could be” and we worked together to create something.

What are some of the things you like about Taliyah as a character?

Erica: I like that she is not the “typical” female champion. She sort of fits a less western standard of beauty which I think is really cool. I think she is a real person, not just a caricature. I like that in her personality she sort of has a huge burden to bare and that’s really hard for someone so young. Seeing what’s happened to her family and staying calm in the face of all that I think is really cool. I love her relationship with Yasuo, I think it’s so freakin’ cool. I love Yasuo as a champion too so I think it’s cool though that isn’t really a character trait. I love that they interweaved their lore. I love Taliyah, I think she’s a fabulous champion. I think that’s something that they touched on that she’s really human, people will relate to her.

What kind of feeling do you get knowing that millions of people will be hearing your voice when they play Taliyah?

Erica: It’s a really good feeling and really exciting. When I listened to the final VO I was super happy with it. I took another tour of Riot though it was the new campus and I got to watch her in game before she was released and got to meet the playtesters and they said they were so happy with the voice over and I thought that was amazing because we went through such a large process to do it and the fact that they were so happy meant a lot. Most of the time you can’t keep work too precious. A lot of the time you are there to do what the client wants you to do and if you’ve done what they want the rest doesn’t matter, but the overwhelmingly positive feedback for her has been so rewarding because how much work we put in. She was a challenge, I didn’t just walk in there and nail it. I felt like she really took some finessing and those are the most rewarding projects. The people who work at Riot are freaking awesome, I can’t say that enough.

Have you decided if you want to make voice acting your full time career?

Erica: It already is. I do VO full time. I’ve been doing VO full time since I started which has been really lucky. It’s never been just a side job for me. Mostly due to the fact that I got an agent so early on and started really hitting the auditions hard. I think I’d like to get into film more. I’m theatrically trained but VO is just something that I love so much and I love that you can play all of these characters that you don’t necessarily look like and you don’t need to look a certain way which I love. Right now VO is my fulltime and I don’t see that changing anytime soon.

Do you have anything you’d like to say to your fans reading this?

Erica: My fans? I love you guys. I love my fans and the fans of shows I’m in. It’s so funny, Peter Quinn (the guy I’ve known for years at Riot) linked a Reddit forum on Taliyah to me and the top comment was “holy crap Taliyah sounds so nice” and it was just a bunch of people saying how good my voice sounded. It was just so amazing. It’s mostly just fans of the projects not just fans of me. I would say I maybe have a handful of fans of me because I haven’t been voice acting for very long, but I’m so happy that they like the work that I do. I think voiceover enhances projects so much and the idea that I can help do that for people is amazing. So yeah, I love the fans and I love the League fans, they’re amazing. 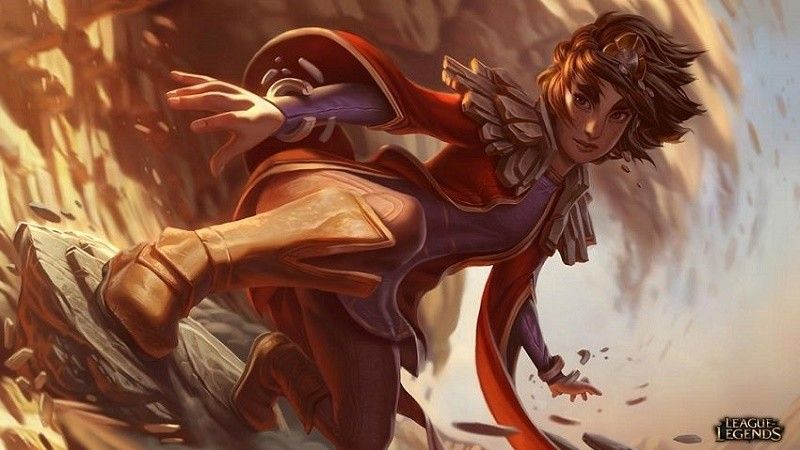