It is no question that vision is the number one influence on your decision making in League of Legends. It answers questions like, "Where is the Jungler?", "Can I path this way?", "Can I take this fight?", or "Can I take this objective?" These are only a small amount of questions, but the list can go on. With the addition of Drakes changing Summoner's Rift and new items from Preseason 2021, it is changing the way we can dominate vision in our games. This guide will hopefully teach you warding spots and how to use all these changes to your advantage. 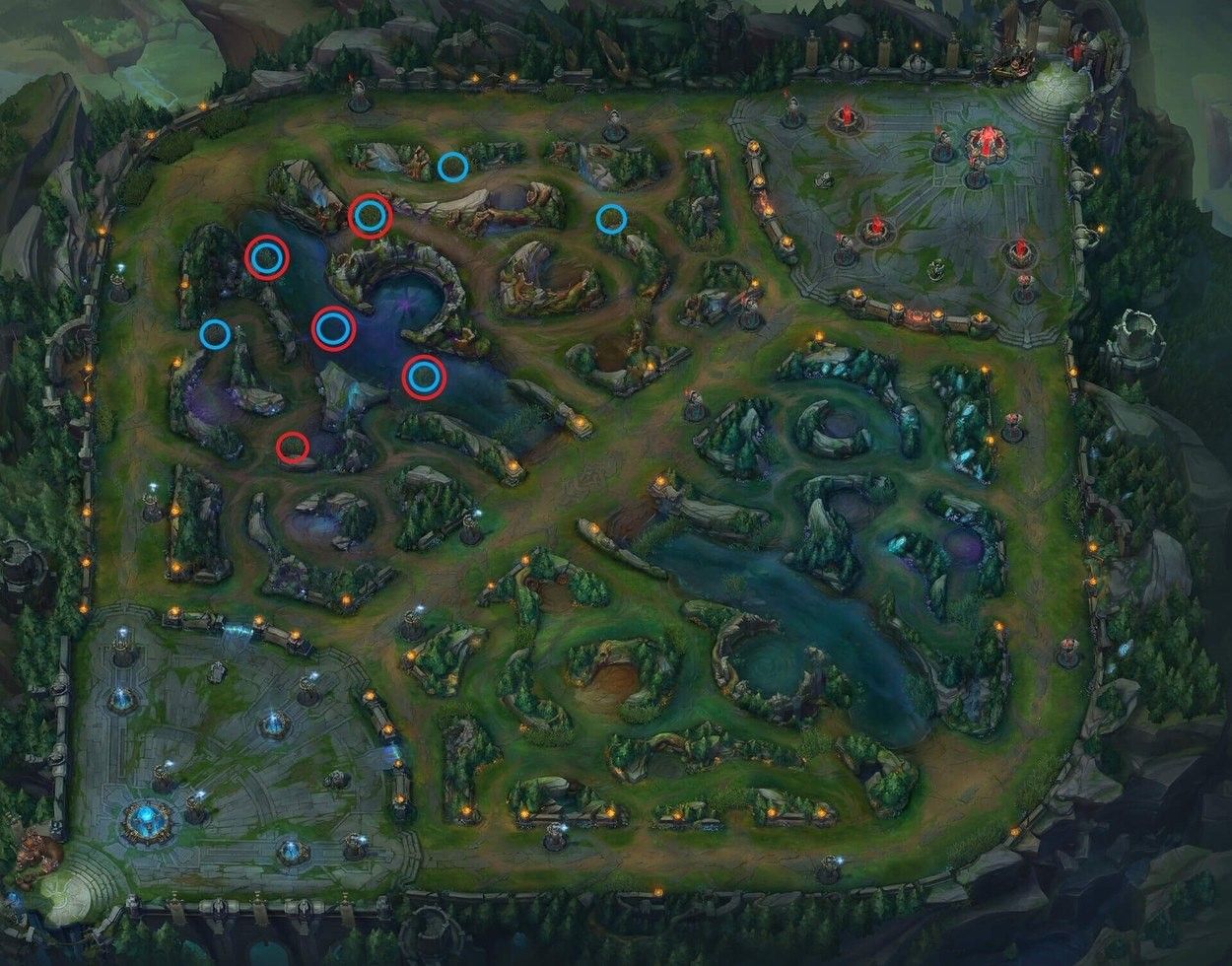 These warding spots are for the Top Lane. If you are on blue side, you are going to want to ward your river brush or the enemies' tri-brush. These wards can make a difference in saving you from a gank. If you have the time, warding the middle of the river can act as the scuttle crab and get you information on enemy pathing and if the Rift Herald is being started. Warding your own tri-brush allows you to see if there is a dive about to be attempted on you and it can buy you the time you need to back off the tower to a safer place. Warding the pixel brush will allow you to see the enemy jungler's pathing and if there are any roams coming from the Mid Lane. If you have a really good shove on the wave and are safe to do so, getting a ward on the brush next to krugs or Red buff allows you to see exactly where the enemy jungler is at.

The very same goes for the red side of the map. You basically get the same benefits from having the same wards within the river and in your tri-brush. The Blue buff ward serves to give you a heads up on where the enemy jungler. You will see them when they are clearing this camp. 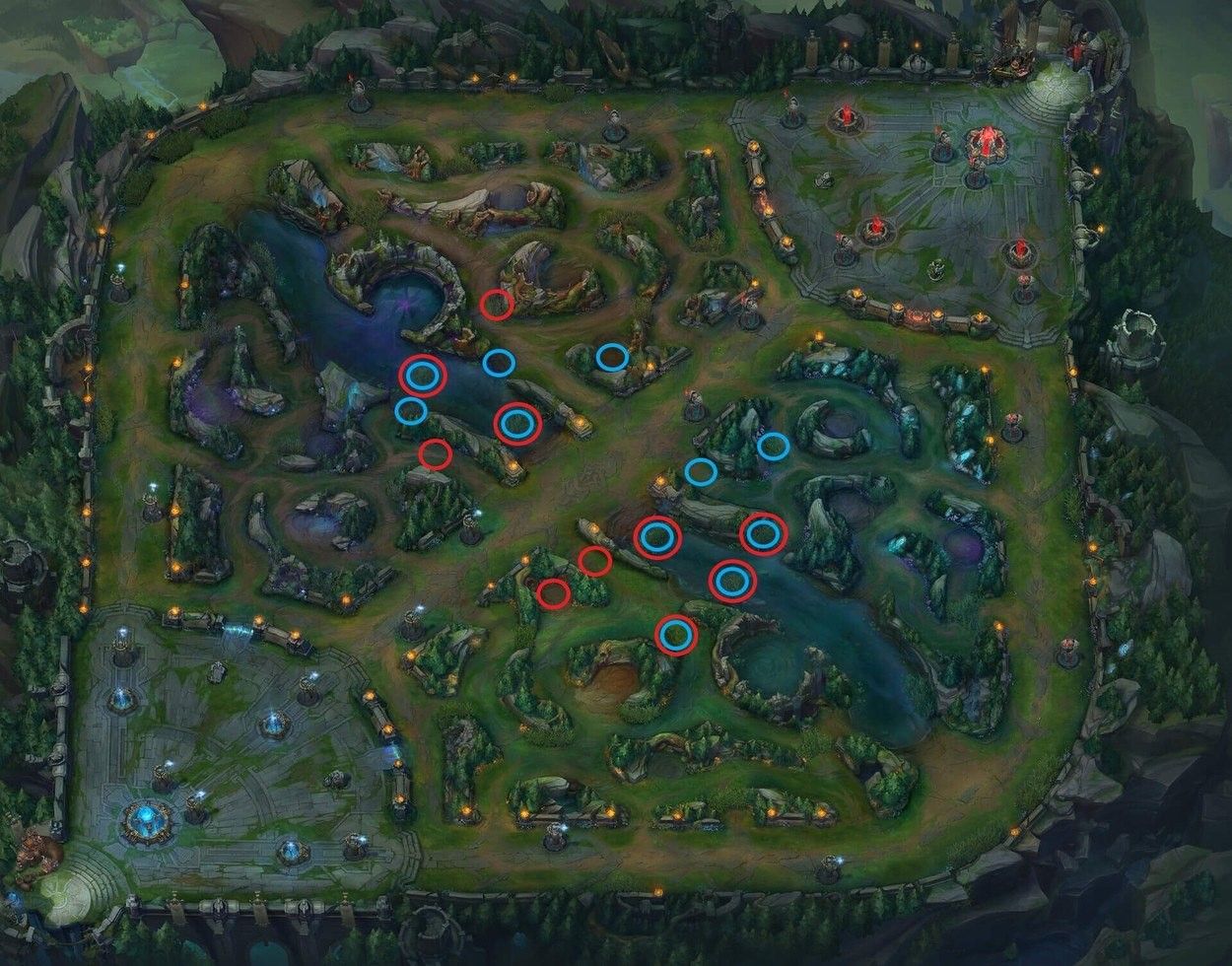 Mid Lane is the focal point of this entire map. So much information can be gathered from the wards that you decide. They can lead to saving you from ganks, tracking the jungler, roam to other lanes safely, and lets you know if you can take objectives. As you can see Blue side and Red side ward similar areas in the because they both want to be protected from roams and Junglers. Being in Mid lane, you have two directions you can be ganked from so these highlighted spots are imperative to have a ward on. 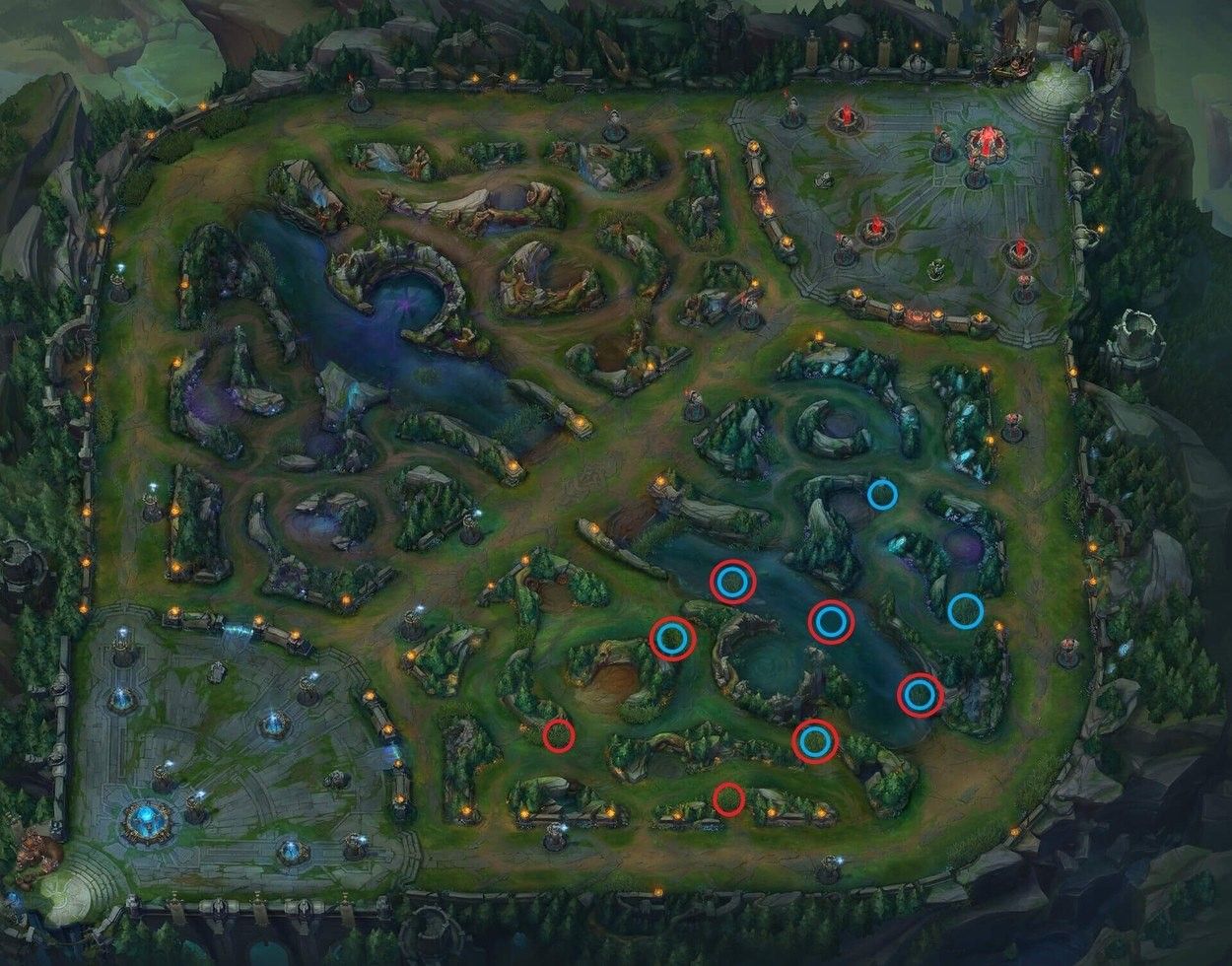 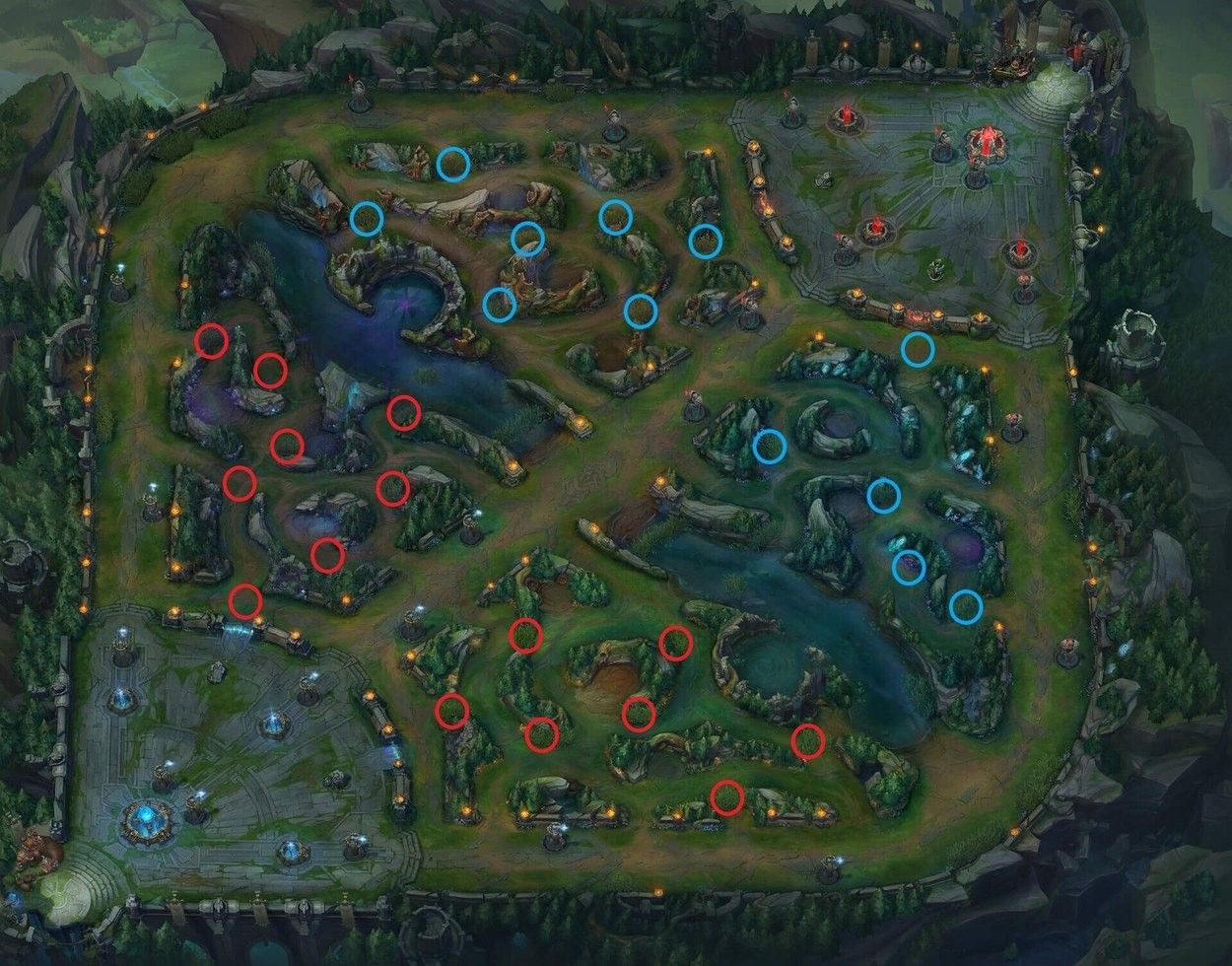 After laning phase, one team is bound to be ahead of the other. This is where you look to move your vision into the enemies' jungle. By doing this, you can track your enemies every move and make it impossible for them to path safely in their territory. You even force them to path into fog of war just to contest drakes and Baron or risk letting you guys snowball even harder. This can lead to easy bush whack kills and taking fights on your terms. These are the wards the respective sides should look to put down when they are ahead of the other team. 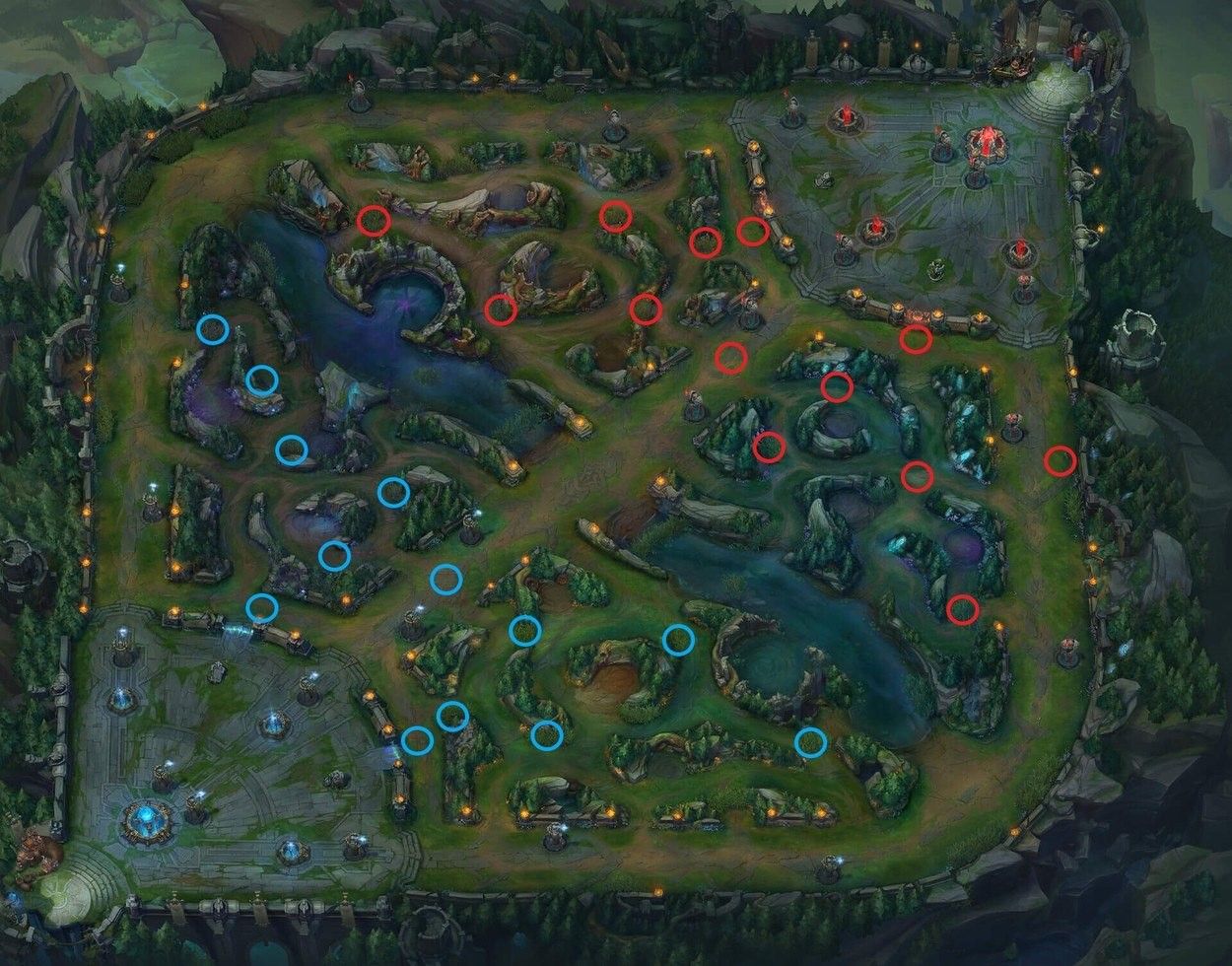 These are the warding locations that you would want to use when you are behind in the game. They can provide clear and safe paths through the jungle to objectives. They also allow you to see the enemy pathing in your jungle so that you can avoid those areas and respond accordingly. You could use this time to set up a pick on an unsuspecting enemy or avoiding the enemy all together to stall out the game.

Since the beginning of Preseason, we have been greeted with new and changed items that help influence the way we put down vision and control it.

The Umbral Glaive has been an item that has been around for a while, but it is still important to mention. This item is imperative to controlling and eliminating enemy vision because of its Unique Passive "Blackout". Blackout allows you to reveal nearby wards that have spotted you for 8 seconds. Then, you may deal triple damage to wards; basically one shotting normal wards and two shotting control wards. Pairing this with an Oracle Lens will allow you to cover so much ground and remove a ton of enemy vision. It renders the enemy blind!

This new item that was introduced has been a blessing for upping your vision game. The Unique Passive "Arcane Cache" allows you to buy up to 3 Control Wards instead of 2. That may not sound all that great but the next passive is what makes this item. The Unique Passive "Visions of Ixtal" allows you to exceed the Stealth Ward and Control Ward cap by 1. Now, you can place 4 Stealth Wards and 2 Control Wards. This may not seem like a lot, but translating that to the Rift, it has a huge impact. You and your team will dominant the vision game with these two items combined. 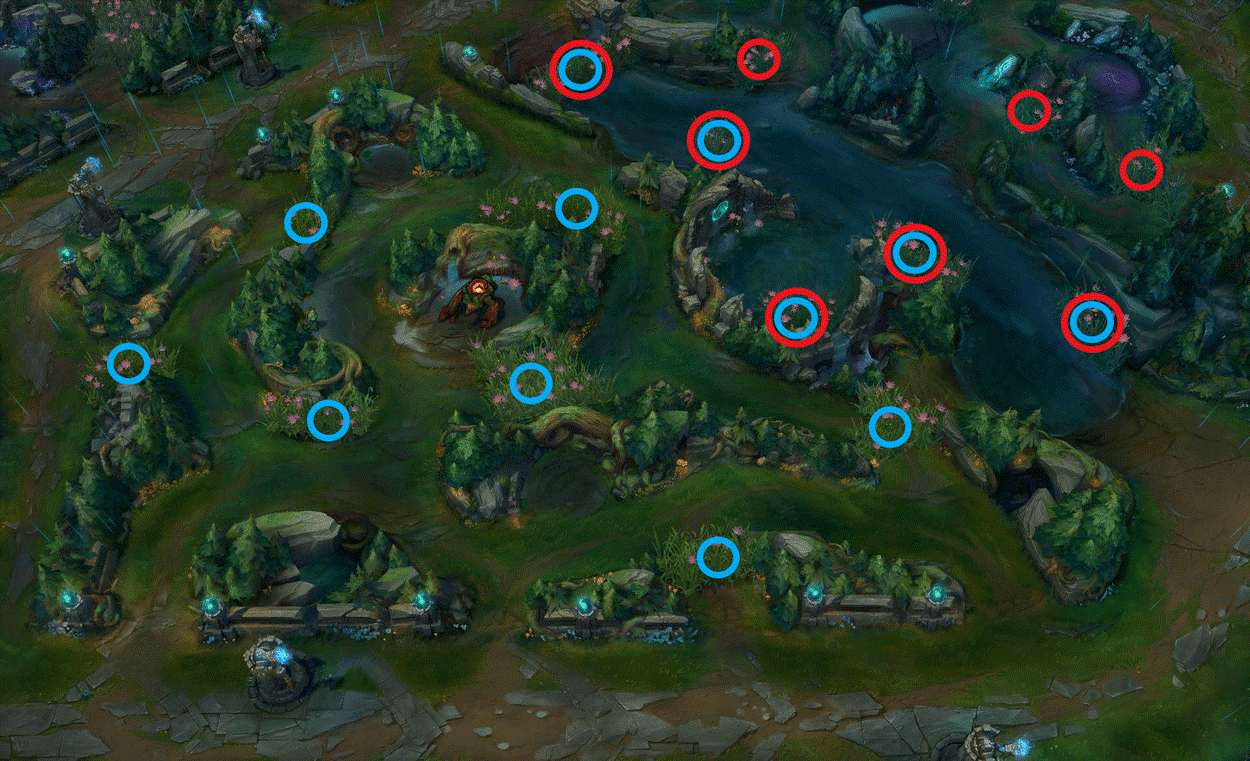 With the addition of every third elemental Dragon changing the Rift's terrain, it influences how players put down their vision. In the photo above, the Ocean Drake has made the Rift's foliage grow and there is more brush around the Jungle and river. As a result, wards can see less and this creates more pockets of fog of war. You will need extensive ward coverage if you want to walk in the jungle safely. The Infernal Drakes destroy terrain on the Rift. They remove walls and brush allowing wards to cover a wider area. Earth Drakes add more walls to the Rift and it results in the same issue with Ocean Drakes. Walls cut vision short so you will need to put down more wards to accommodate this change. Cloud Drakes do nothing to change the vision game of the map. They just provide bonus movement speed in the jungle. 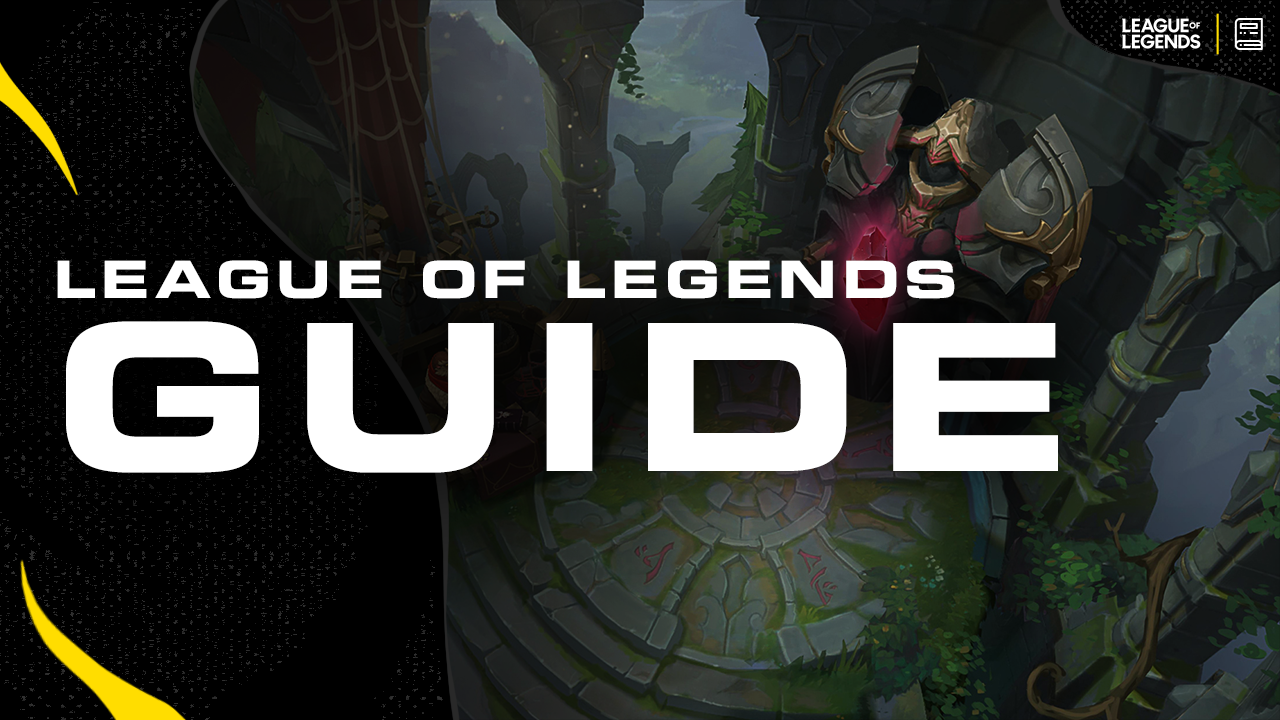