Overwatch players have been hot on the case when it comes to finding out what new heroes we might be getting in future updates for the game. And some of them are pretty dedicated too, seeing the way people tried looking for Sombra was insane. All in all, it's safe to say that people are excited for new heroes when it comes to Overwatch. Whilst you may have been riding the hype train for Sombra, have you heard much about the other hero players have been speculating about? Doomfist, to be exact. Surprisingly, there's a lot more information out there about Doomfist than you might have thought initially, and it's definitely something you should be paying a little bit of attention to! Overwatch developers even told PCGamer that they have discussed making Doomfist a playable hero in Overwatch. So let's get started and talk about everything we know about Doomfist.

When did we first hear about Doomfist?

Doomfist has been around since the announcement trailer of Overwatch, and is actually the storyline over what the heroes are fighting about in the reveal trailer of the game! More specifically, we first saw the giant metal fist in the trailer, and not the actual person who would be "Doomfist". Of course, we only really knew at this time that it was a reason the different characters were fighting, to either protect or steal the fist. But ever since then, the story of Doomfist has grown. The information might not be as prominent as the weapon reveal like what Ana had for example, when Blizzard hinted at her through the biotic technology using sniper rifle, however the hints for Doomfist, or at least his backstory, are hidden quite nicely in different places here and there.

What does the map Numbani tell us?

The map gives away quite a bit about Doomfist, and it's quite clear when you're looking for it. When you're not too busy chasing the payload you may notice that there's a Doomfist exhibit going on on all the signs around the map. Well, a lot more than just the signs tell you that if you look around a little bit more. One key location: the final defending spawn room, with the 3 Doomfist posters. The place in the Numbani Museum, specifically made for Doomfist's gauntlet, and the fact that the attackers are delivering the payload, containing, guess what, Doomfist's gauntlet! What else do we know though? From things that aren't exactly clear at face value?

Omnics and humans live in peace within Numbani, that's the unique thing about the place. But one event that the city itself holds, is "Unity Day". This is likely an event celebrating the peace and harmony between the humans and the omnics in Numbani. This is also the same day that you're delivering the payload containing Doomfist's gauntlet. The reason that's significant is that the museum is opening up it's Doomfist showcase on the same day as Unity Day. This gives us an idea that Doomfist, likely "The Savior" has some sort of connection with the close connection humans and omnics now have within Numbani. But, who is "The Savior?".

What about Doomfist himself? Who is he?

Of course, until Blizzard actually confirms the information they're giving us through these little hints in Numbani and many other places, we can't tell for sure. But the community has worked out some in depth background for the character, and even tried decoding and working out the Omnic language! But what about the simple stuff? Lets take the final defending spawn room on Numbani. You can see that there has clearly been three different Doomfist "characters" over time. They all have their own names, ranging from "The Savior", "The Scourge" and even "The Successor". So what does this tell us? A little bit more than you would think at first glance, actually. Lets take a quick look at the three different characters, and what we know about them.

The Savior poster, with the subtitle of "Adhabu Ngumi", is the poster that gives away the easiest bits of information. The subtitle itself, literally translates from Swahili into "Doom Fist". This kind of tells us that this was the first original Doomfist that we've heard about in the Overwatch storyline. That, and the fact that there are no posters for any predecessors of the title. What else can we take from the poster other than just the text? Judging by the pose, the title of the poster and the background that is on the poster, we can assume that the original Doomfist had protected (likely Numbani) innocents from some sort of disaster, and judging from some signs within the city, possibly even "The Scourge".

The pose is in a glaring sun, similar to some sort of victory pose. We can also tell from the looks of the background that he's also in some sort of desert, helping fuel the thought that he has a connection to Numbani, including other reasons. Another small thing we can work out from the Savior is that he is quite possibly a military figure, due to his physique, and more specifically, his uniform.

The Scourge poster, with the subtitle "Akinjide Adeyemi". This name is likely Nigerian in origin, yet it doesn't seem to have a simple translation. What we do know however, is that the first name means something along the lines of "The strong one has returned". The second name is also something similar to "The crown fits me". So what can we work out so far from this? Firstly, we can tell from the fact that there are multiple posters, and the subtitle "The crown fits me", that there has been more than one user of the gauntlet, and that "Doomfist" is a title, not a characters name. There's a little bit more to this however, if you dig into this information, starting by taking a closer look at the title, subtitle, and background of the poster.

Lets look at the title and the subtitle quickly. Whilst "The strong one has returned" doesn't seem to give you any hints, it does reinforce the idea that Doomfist is definitely a title, meaning that the Doomfist character will likely not be The Savior nor The Scourge. However, "The crown fits me" gives off a seemingly menacing feeling, almost as if the character is hunting for something, with the crown likely being the gauntlet, and some sort of symbolism to royalty (since the Doomfist title is inherited. The title of that Doomfist character is "The Scourge" however, meaning that he's clearly not in it to help others, unlike the previous Doomfist, The Savior. What else gives this away? The aggressive, almost cocky pose that the character has, in front of what appears to be some sort of mushroom cloud in the background. There's also a possibility that The Scourge was responsible for damage to buildings in Numbani, as mentioned later.

Sadly, this poster is the one we'd most likely assume would be the playable character version of someone who holds the title of Doomfist, yet is also the poster that gives us the toughest information to try to crack through. Whilst "The Successor" doesn't really tell us much other than he took up the use of the gauntlet, the subtitle does tell us something. Or at least we think anyways, since it's in the omnic language. Another feature Blizzard wants to hide is the physical appearance of this Doomfist, as he's in silhouette, and nothing can be seen other than the characters general physique and shape, and they are really the only things that can be determined from the poster. But, as I mentioned previously, some brave souls out there have tried to decrypt and learn the omnic language themselves, to be able to read some of the signs around Numbani, including this one. But what have they found for us?

Well, we can tell from the language itself that it's unlikely that the current Doomfist is completely human. Whether he is a complete omnic, or a hybrid between human and omnic like Genji for example, is unknown. Whilst this is unconfirmed from Blizzard, people are speculating that what this says is giving away something about the character being a mixture of human and omnic , but when it comes down to being certain, we can't tell this unless Blizzard confirms it for themselves, or if the poster revealed a bit more in terms of his physical appearance. Finally, you can also see in the background that there is a fist, commonly used as a representation / symbol of power or rebellion, which can give us some good signs about the possible revolutionary, "The Successor". His "gauntlet" now has become his entire arm too, which also reinforces the idea that Doomfist is a half omnic, half human or pure omnic character.

- Doomfist actually does have a connection the members of Overwatch. However, it's more likely to be The Scourge than any other, and there's a reason for that. From what we can tell from the original Overwatch cinematic, the kid talks about how Winston and Doomfist were fighting, and how Winston actually beat him!

- The voice announcer at the museum confirms that the gauntlet that is stored inside the payload, and being put into the new Doomfist exhibit, is the one of The Scourge. "Coming soon: the Numbani Heritage Museum will be the proud owner of the Doomfist itself. Once wielded by the infamous Scourge of Numbani, it will be the centrepiece of an expansion of the exhibit focusing on the man who bore the name Doomfist."

- Just because there is a third Doomfist doesn't rule out the possibility of The Scourge being a playable Doomfist! We don't know if he passed away, went into hiding or was locked up behind bars. And because of the fact we don't know, this could mean we could also possibly have The Successor be a playable character as well, but there is less hints given for this theory, unlike the gauntlet in the payload that looks more like The Scourge's.

- It was mentioned at Overwatch discussion at Blizzcon, that the citizens are "threatened by the villainous hero Doomfist". And the quote, from the kid in the cinematic reveal trailer, and mentioned on stage: "I heard he could level a skyscraper". It's possible this has ties to the skyscraper in the distance of Numbani in a teaser image, that has obviously been victim to some sort of damage, explosion (or hard hitting object that's caused one). The image mentioned is shown above too. 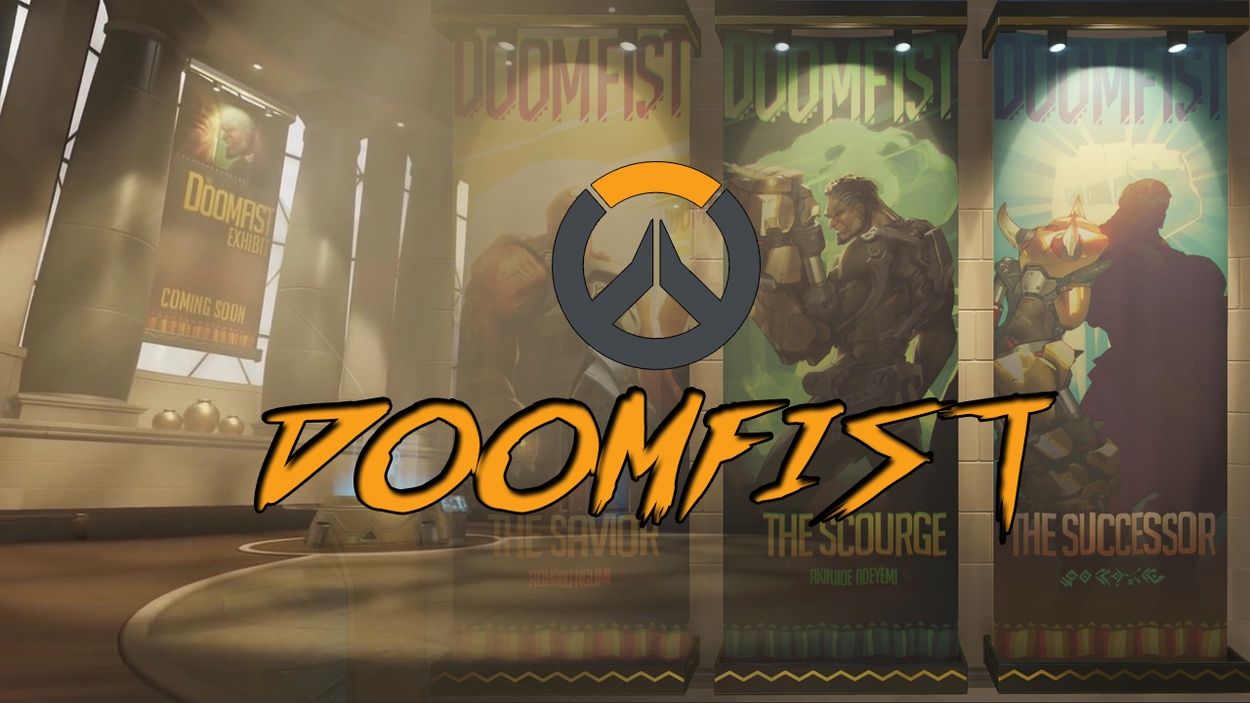