As with any other new PC game, especially if it’s a new one made to be played competitively, one of your first stops should be the settings menu where you’ll be able to customise your experience to your liking. VALORANT has a vast array of settings available, giving you the power to change even the slightest of things. This article contains an overview of all settings in the VALORANT menu and helps you optimize them! 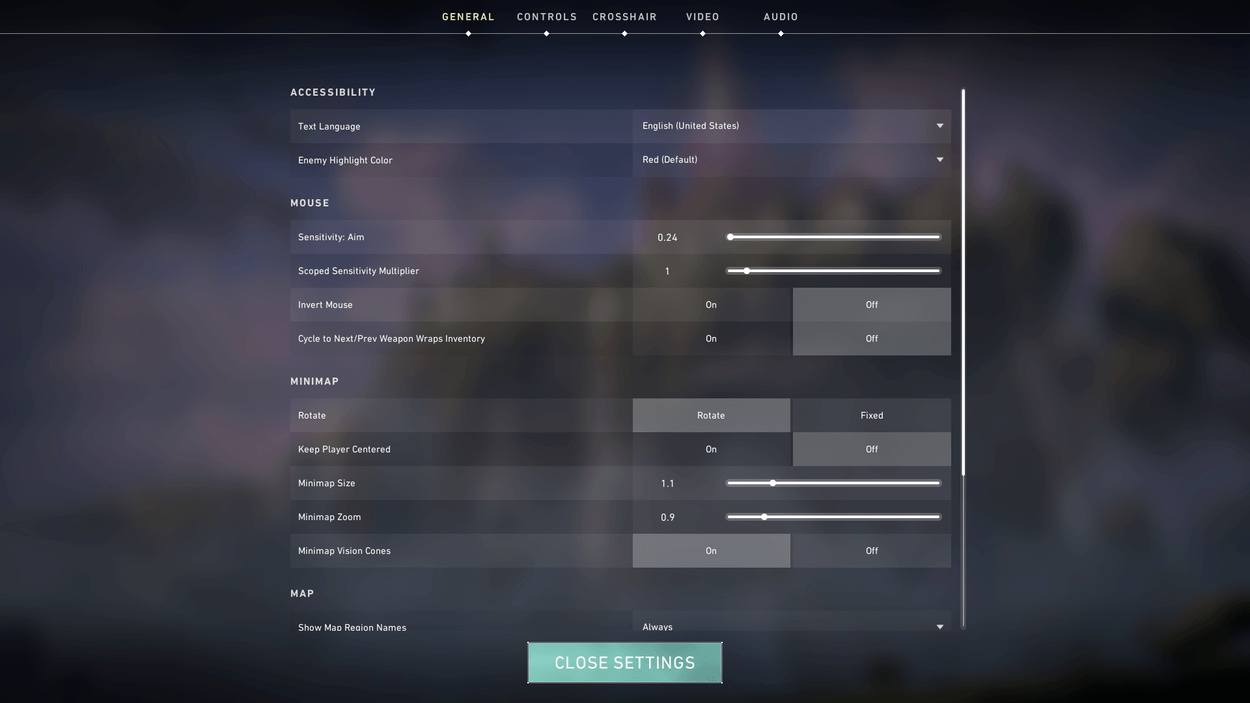 Text Language - Changes the language of the text (might need to change it in the client during installation if it doesn’t show another option besides the one it currently is);

Cycle to Next/Previous Weapon Wraps Inventory - If you use mouse wheel to scroll through weapons, you can use it to close the inventory and/or buy menu.

Rotate - If the map rotates according to the way you’re facing or not;

Keep Player Centered - Have your map dot on the center of the map or not;

Minimap Size - Changes the minimap size on the HUD;

Minimap Zoom - Changes how zoomed the map is (the HUD has a limit on how much it is able to show at any given time);

Minimap Vision Cones - Shows the current Field-of-View of the players; appears as a cone on the map in front of each player.

Show Map Region Names - Whether the map has written callouts or not.

The Controls menu is pretty straightforward and a staple on every PC game. This menu allows you to customize every single keybind used in the game and is split into four categories: Movement, Equipment, Communication and Interface. Customize it entirely to your liking. 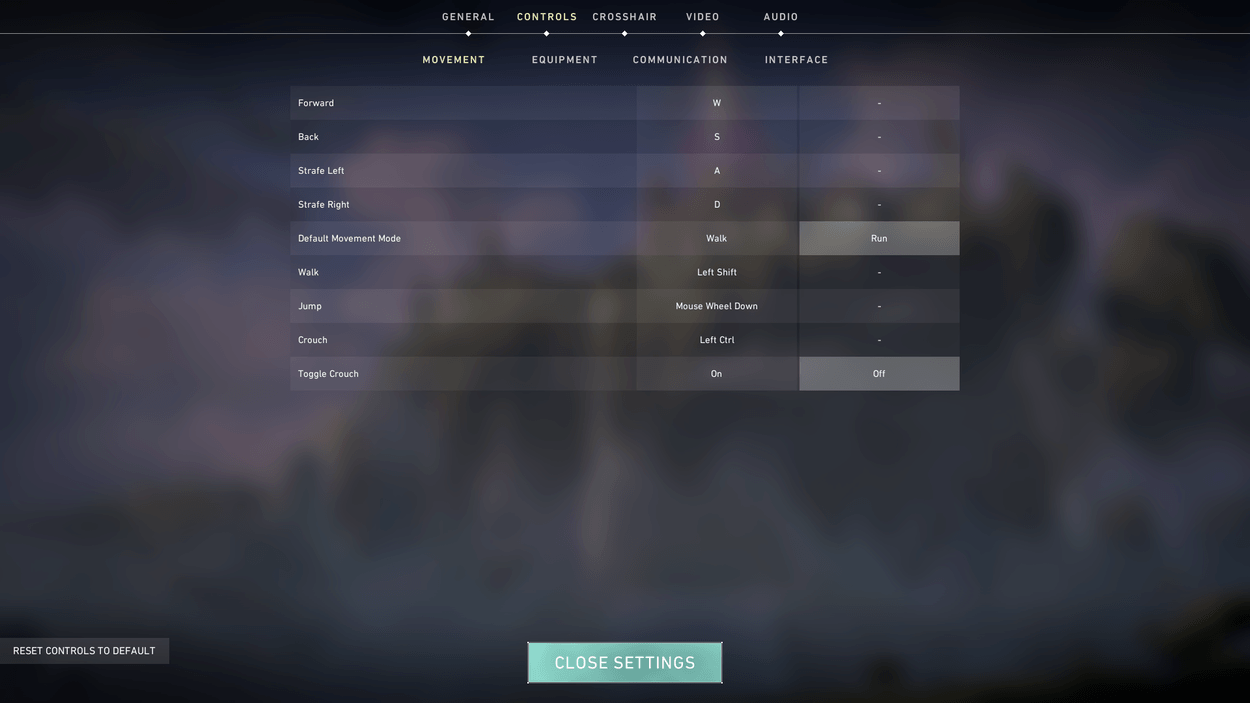 Movement - every option related to your character’s movements;

Equipment - every option related to your character’s action with something other than his body (eg.: shooting, interacting with weapons, planting the Spike);

Interface - every option related to HUD and other in-game menu options.

Allows you to entirely customise your in-game crosshair. Remember that using a knife or a Sniper Rifle changes the way your crosshair behaviours (smaller gap with a knife, wider with a Sniper). 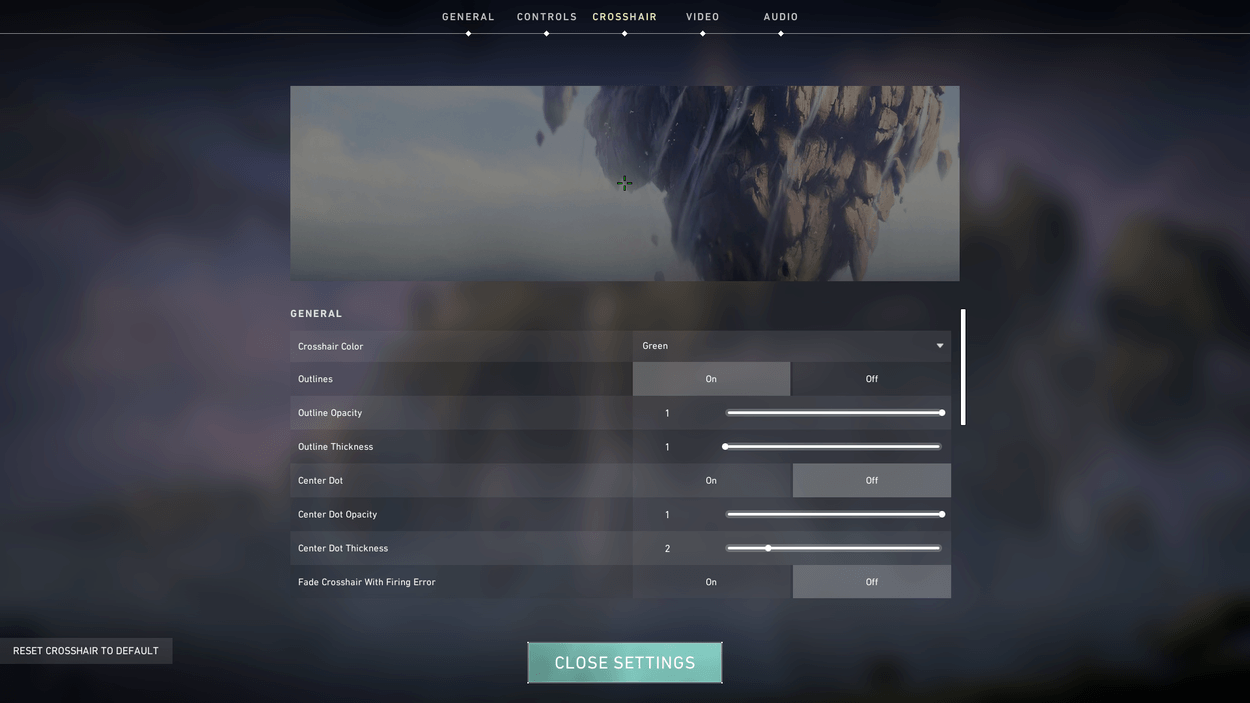 Straightforward options, use it to deeply customise the way your crosshair looks.

The Video tab allows you to change the way your game looks. It’s also the place to go to improve game performance in your PC. 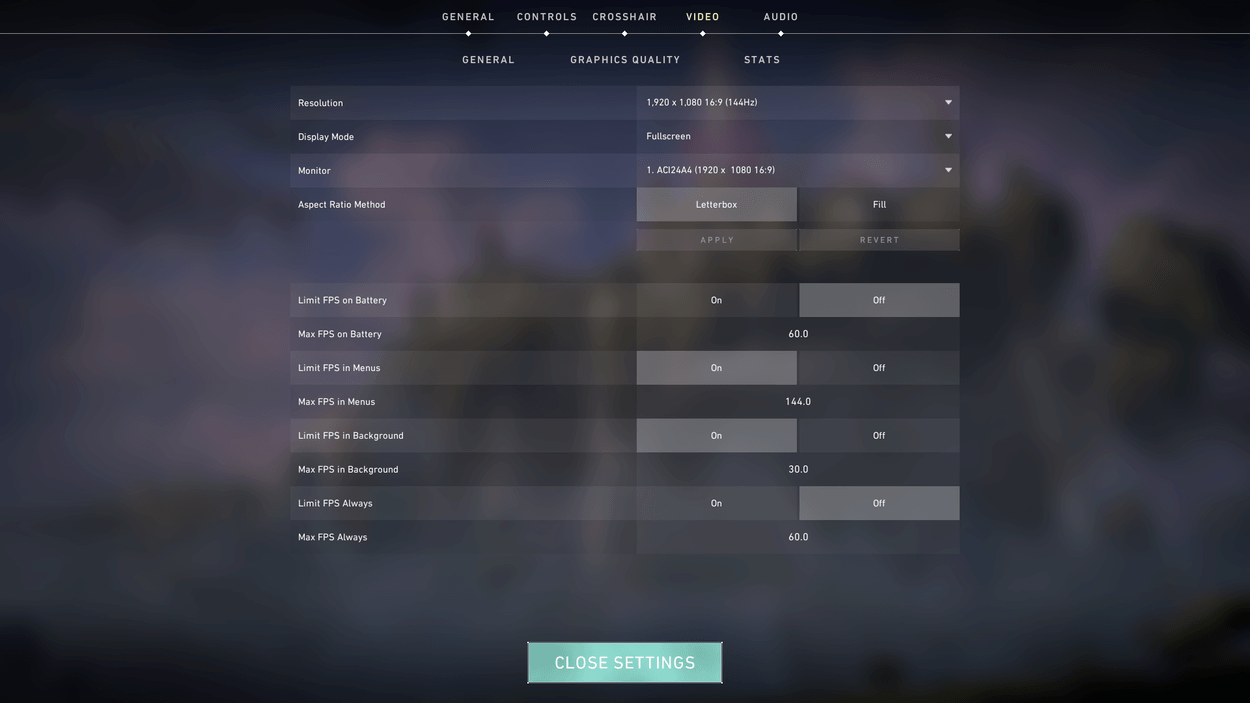 Resolution - Changes the resolution and refresh rate your game is displayed;

Display mode - Changes whether you have your game in Fullscreen, Fullscreen Windowed (better for multitasking) or Windowed;

Aspect Ratio Method - Useful if not using widescreen resolutions. Letterbox makes your game widescreen in 4:3 monitor aspect ratios, while Fill will ignore it.

Limit FPS on Battery - Whether the game limits the displayed FPS’s to preserve battery while on a disconnected laptop or not;

Max FPS on Battery - Set the max FPS the game is allowed to display while running on battery (more FPS = less battery time);

Limit FPS in Menus - Whether the game limits the displayed FPS’s on the main menu or not;

Max FPS in Menus - Set the max FPS the game is allowed to display on the main menu;

Limit FPS in Background - Whether the game limits the displayed FPS’s while running as a background process or not (helps with Windows performance);

Max FPS in Background - Set the max FPS the game is allowed to display while running on the background;

Limit FPS Always - Whether the game limits the displayed FPS’s at all times or not;

Max FPS Always - Set the max FPS the game is allowed to display at all times. 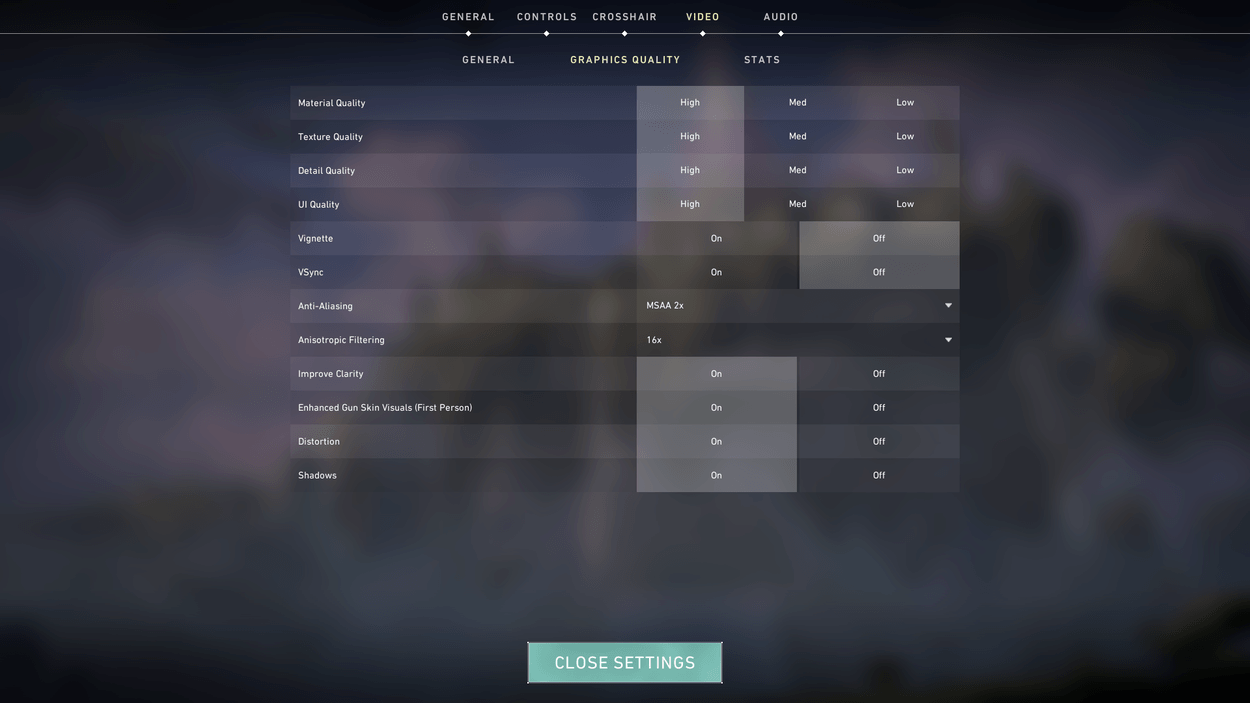 Anti-Aliasing - Video technology that helps smoothing out corners and pixels;

Anisotropic Filtering - Improves the texture’s quality when viewing them from different angles (almost no impact in FPS);

Enhanced Gun Skin Visuals - Enhance your weapon’s visuals (only seen by you);

These are more technical options, allowing to monitor your game’s performance, as well as the server’s.

Total Frame Time - Displays the amount of time your computer takes to render a new frame;

CPU Frame Time - Displays the amount of time your processor takes to render a new frame;

Packet Loss - Displays possible data transfer issues between your computer and the server.

You can find every option related to in-game sound and voice communication here. 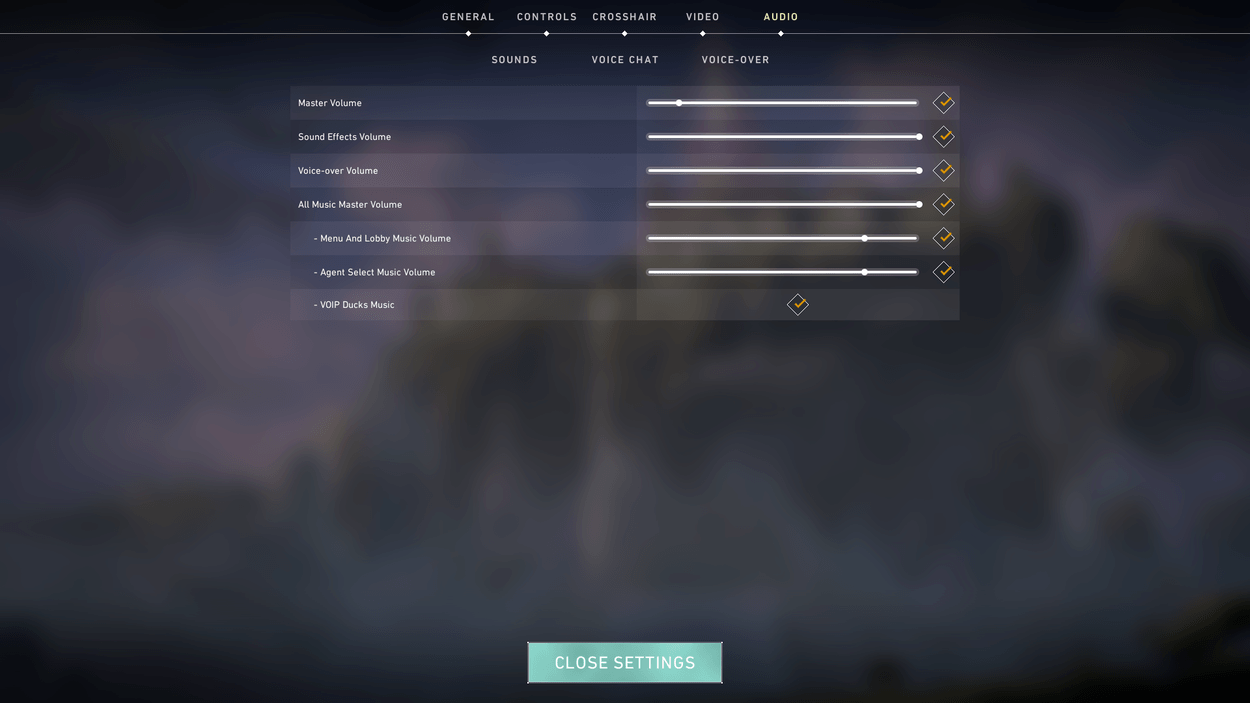 Master Volume - Controls the volume of the entire game;

Voice-over Volume - Controls the volume of the game announcer;

Output Device - Changes the playback device (useful if you have more than one);

Input Device - Changes the microphone used (useful if you have more than one);

Loopback Test - Allows you to hear yourself for testing purposes;

Now that you understand all the VALORANT settings, you can start by optimizing them for the best FPS and performance settings!

VALORANT is a competitive first-person-shooter that places players in a five-verus-five match. The player can choose from nine agents, each with four unique abilities. The game combines elements from games like Counter-Strike with elements from Overwatch and League of Legends. The result is an awesome shooter game where both excellent aiming and smart ability usage is rewarded. 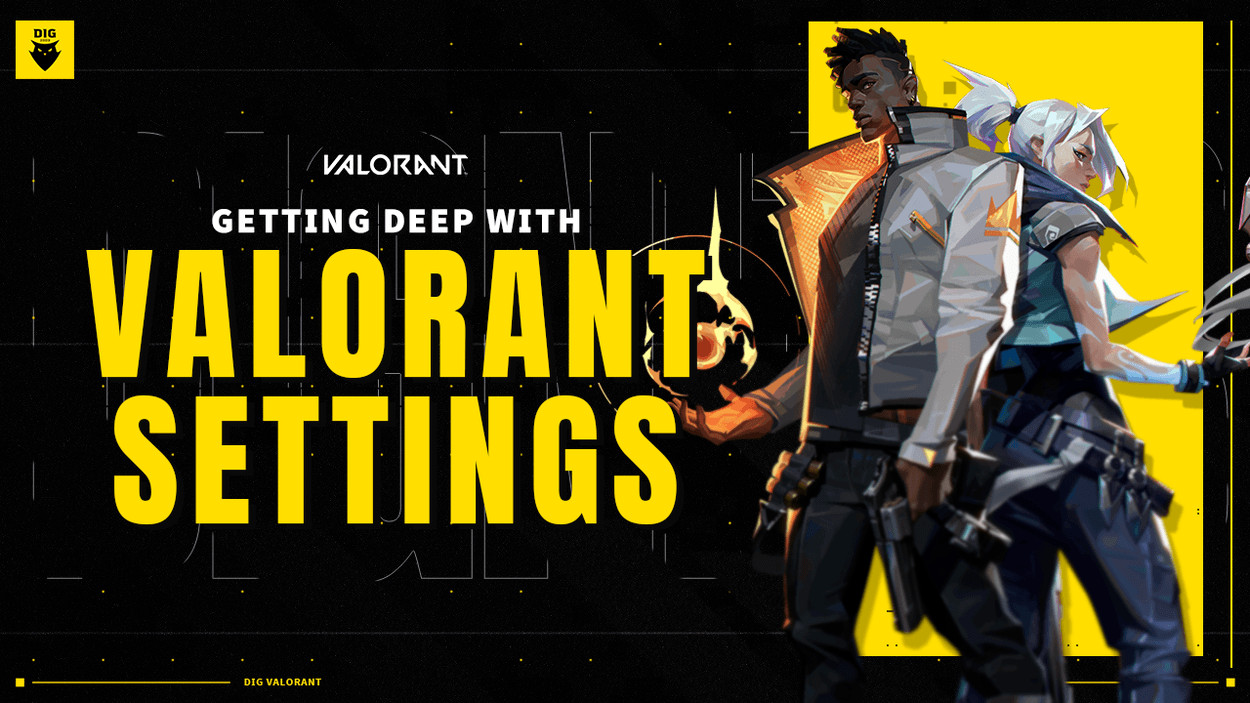