When considering the components of competitive battle royale games, a large focus is on flashy mechanics or precision aim. However, an equally important aspect is where you position yourself as the game progresses, also known as rotating. In a game like Fortnite, this could be a headache. Because there are 100 players in a lobby, there is never a single objective method to nail your rotations. Instead, you must decide how you want to move based on the game around you, as well as your personal playstyle and goals.

By examining how players are distributed around the map while considering how they react to different situations, we can break down the theory behind making rotations that minimize risk. Additionally, depending on whether you are playing stacked tournament lobbies vs. casual arena games, there will be differences in strategy. Everyone’s objective in a game of Fortnite will slightly vary. Thus, try to adapt these concepts into your own gameplay, without necessarily following it strictly.

The mechanic that forces Battle Royales to progress is a gradually shrinking playing zone, with Fortnite having the damage dealing storm to force players inside the safe area. Players begin to be distributed across the entire island, with new safe zone boundaries appearing periodically. For each new zone, there is a period where players are shown the new boundaries, and a following period where the boundaries gradually shrink. The process repeats until the entire map is covered with the storm, inevitably ending the game.

Before we discuss strategies, let’s talk about the theoretical distribution of players as the zone closes. For most games, we can assume that players are completely evenly distributed across the map to start. Another assumption is that we can assume every player is playing to stay alive, and thus will attempt to position themselves as best as possible, while staying safe from other players.

We see these assumptions mostly applied in professional matches, so let’s take a look at a game from session three of the NA-East FNCS Semifinals. When the first zone closes, players will attempt to move towards the next safe zone. The south-west side of the map is already in the zone, thus players will either stay near the edge, or move towards the center. As for the other sides of the map, all players outside of the safe zone are required to move in. This concept creates what is known as the deadside and is a result of player congestion. 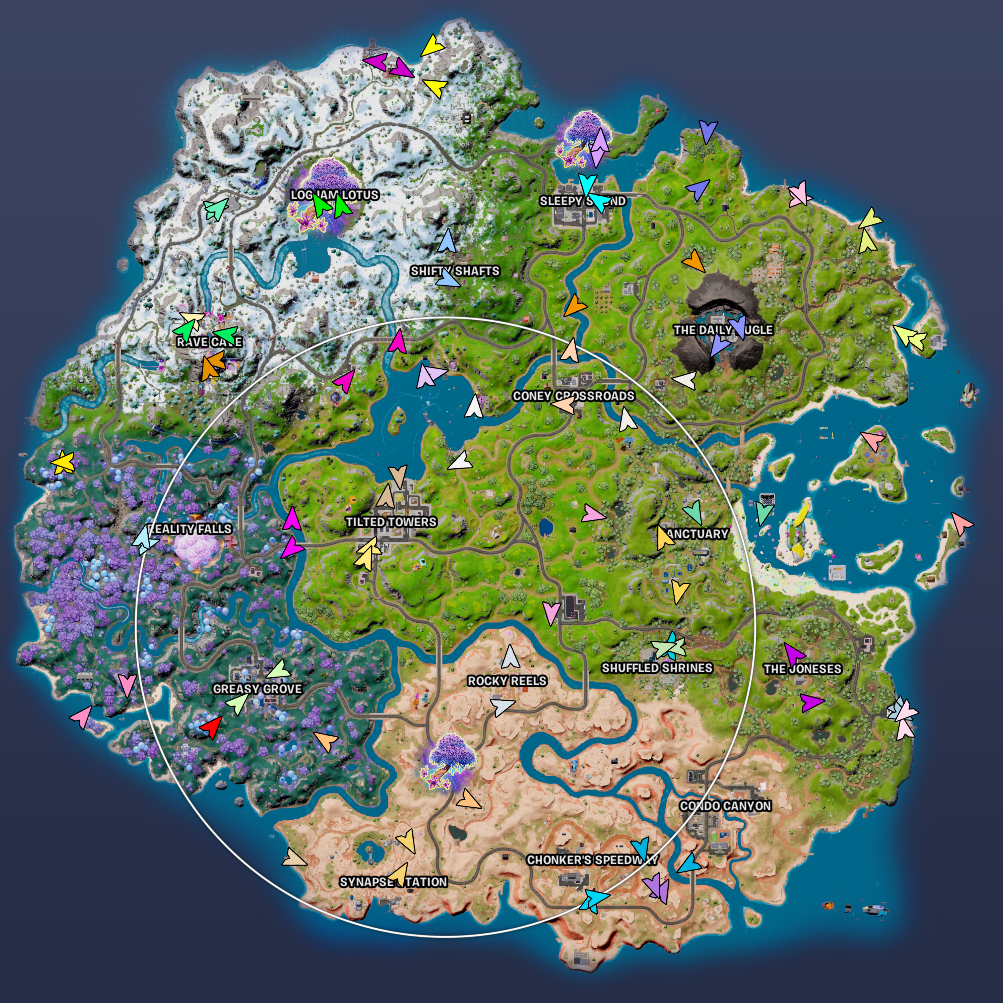 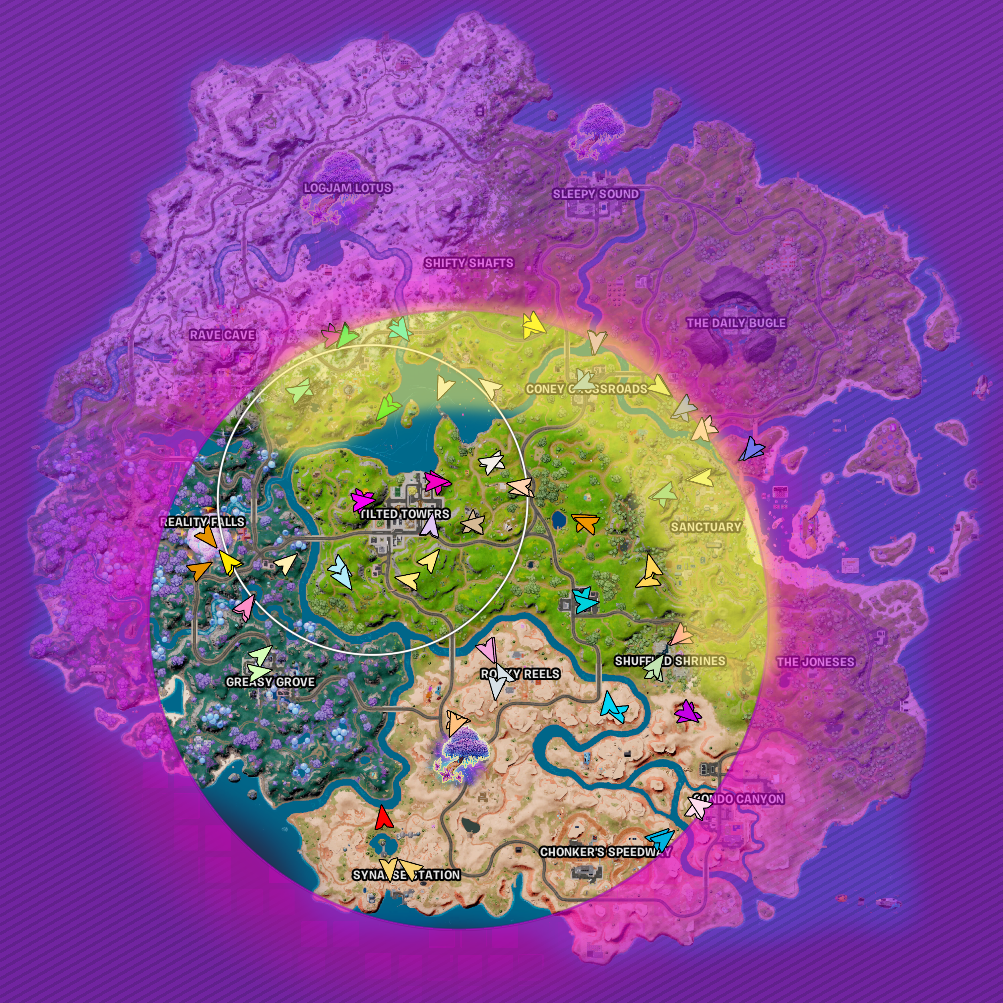 This concept continues through every zone. Let’s take a look at the following zone. Because the north-east section of the first zone is now congested, the east side of the new zone will be the most congested after the rotation, with the west/south-west side continuing to stay as the deadside. This congestion will continue up until the zone fully closes, or in the case of competitive lobbies, moving zones. 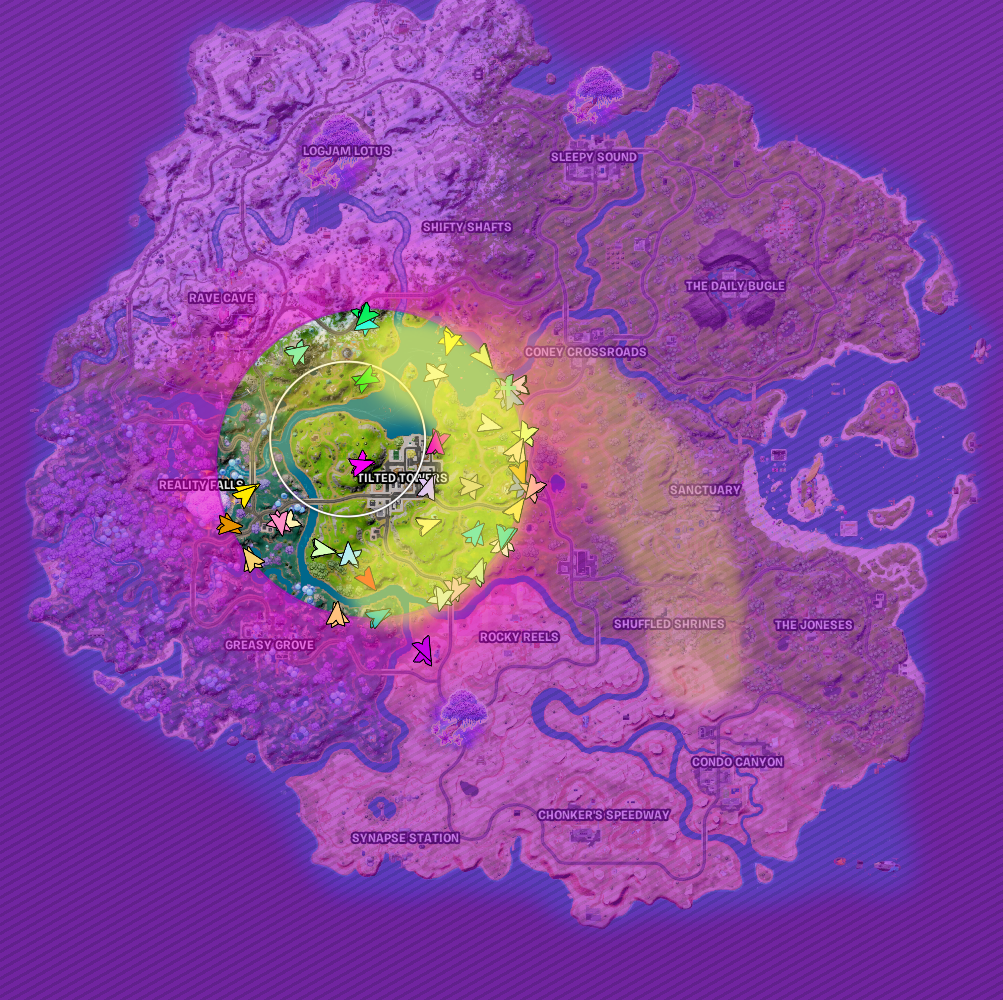 The following congested side as a result of the new zone

Goals When Making a Rotation

Now that we have a general idea of how players rotate, we can consider in-game goals and how we should play around the concept of congestion. Generally, players want to either play safe and passive, or aggressive for eliminations. Depending on the type of lobby and the number of players alive, there are different strategies that should be used to accomplish these rotations.

In Fortnite, we have public/arena matches, which are casual matchmaking game modes. In these lobbies, players don’t have anything on the line, meaning players are instead looking for the most action and entertainment. The product of this mentality is that more fights are taken earlier and quicker, thinning down the lobby at an accelerated pace. In lobbies with smaller players counts, it is typically much easier to control your own game. Because running into a player is less common, the largest factor on how your game will go is your own decision making.

Let’s say you wanted to play completely passive, only playing for placement. After landing at your drop spot and looting, you would want to immediately head for the deadside of the map, wrapping around the edge. It’s important that you loot quickly so that you have enough time to safely make it around the map. Because the majority of players will be moving directly into the zone, the edge will likely be completely uncontested. In the current meta, you can utilize boats, rifts, slipstreams and animals to assist your rotation around the edge. Additionally, you shouldn’t be afraid to stay in the Storm to complete your rotation. Typically, the edge of the map contains campfires, coolers, and fishing holes to provide you with enough health to survive the rotation.

On the other hand, a common issue for w-keying players is that because lobbies thin out quickly, there may be difficulty looking for players to practice fighting. In this case, it would be a good idea to land in the center of the map, looting and waiting to see where the first zone pulls to. Because players from the further corner of the map will likely rotate by moving towards the center, staying near the edge of the first zone is a surefire way to find fights quickly.

On the other hand, we have tournament matches, where qualification or prizing are rewards for placing well. Thus, players will play more strategically, making lobbies fuller, or “stacked” as the game progresses. In these lobbies, players will all have the same mindset when rotating, trying to accumulate placement points while taking any advantageous fights. In these matches, it’s far more important to have a good rotation plan, as congestion is amplified as more players stay alive when the game progresses.

Because the concepts of player distribution remain the same, you can still adapt the same ideas when making a deadside rotate. A key difference is that there will likely be other players doing similar strategies, so it’s not uncommon to run into players at the edge of the map. Thus, it’s important that you loot and farm quickly, rotating early to ensure you can safely complete the trip without being held up by other players. Additionally, some lobbies will cause the activation of Storm Surge, meaning you need to deal damage to prevent being eliminated by this mechanic. It’s important that you rotate over areas with high elevation to look for long-range damage on other players rotating. Finding the right balance between dealing damage without over aggressing is the key to play for placement.

As you’re most likely playing tournament matches with a duo or trio, communication is extremely important. While rotating, you must be in sync with each other to avoid getting out of position. We recommend the HyperX DuoCast USB Microphone for that crystal clear audio quality. You can switch between two polar patterns with the touch of a button for the perfect audio settings for your environment.

Finally, let’s talk about the application of this theory to endgames. In Fortnite, we consider an endgame to be around the 5th phase of the Storm, where the majority of players are tightly packed in what remains of the playing field. Because of how congested all the players are, this phase of the game is different from the earlier stages, with an emphasis on expending all materials and items to live as long as possible.

An important difference is the addition of the half-in-half-out zone and moving zones. The idea behind implementing this mechanic into competitive lobbies is to force players to expend their remaining resources to survive each new moving Storm. Without moving zones, players would be able to stockpile heals and materials until the very end, minimizing the action and intensity of the game we see today. To do this, let’s take a look at another game in the same FNCS Semifinals

Fundamentally, the concept of the deadside remains the same. First, we can take a look at the half-in-half-out zone. When the zone first appears, there will be a set number of players close, or within the new boundaries. These players will quickly rotate and fortify a base, occupying the majority of space available. The players who are further away are unable to move early, as they will be a primary focus of opposing gunfire. Thus, what ends up happening is that the majority of teams rotate at the same time, expending materials and utility as the zone closes in. Many teams will take whatever space they can, basing up as soon as they enter the circle. This causes the half of the zone that was initially safe to be congested, and the half that was in Storm to be the deadside. 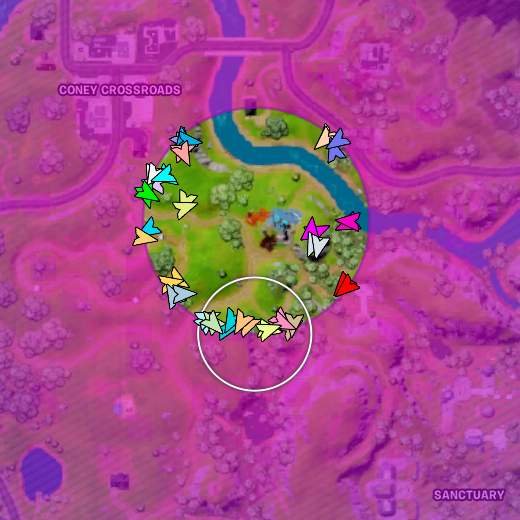 The half-in-half-out zone is shown

When the first moving zone appears, players without mobility items are forced to build tunnels and tarps to safely get to the next safe boundary. If we keep the deadside in mind, players can rotate by using less mats by running along the less congested edge, becoming less of a focus, and preserving materials as a result. 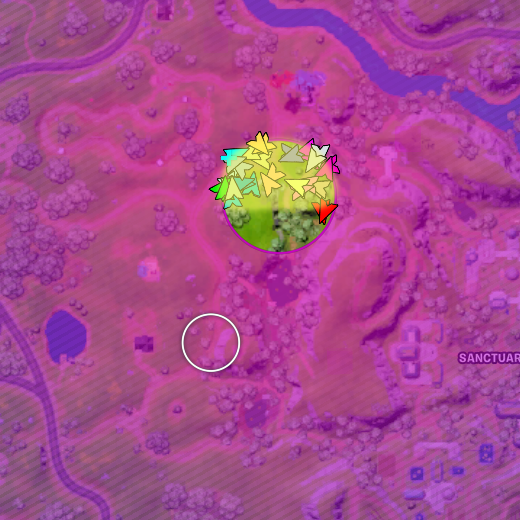 Let’s apply the concept of congestion again. Many players who reach the safe zone will take what they can and stop moving as soon as they don’t need to anymore. As a result, the new congested side is the edge of the boundary that the storm moved into. Players can then capitalize by rotating further into the deadside, making the following rotation easier. 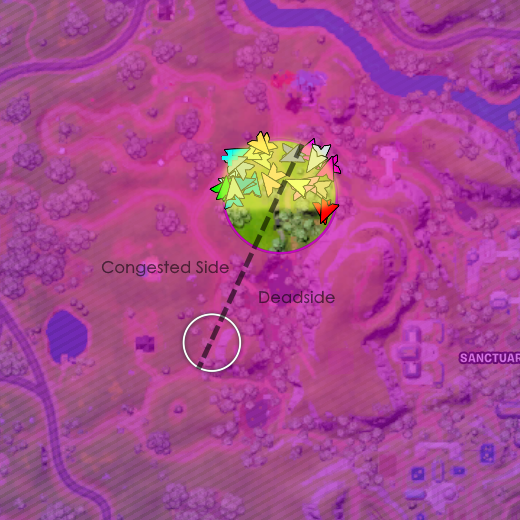 Splitting the line of movement in half, we can see which side is the deadside

By taking a look at the concept of congestion, you can hopefully get a better idea of how to plan your rotations, avoiding or finding players at your discretion. Don’t forget to get the right accessories to communicate with your teammates. We recommend the HyperX DuoCast USB Microphone which supports two polar patterns and has a very low-profile shock mount.

As for completing the rotation, there are many ways to move in Fortnite. Using items, vehicles, materials and your surroundings while combining the theory of how players move is the key to getting those placements and eliminations. 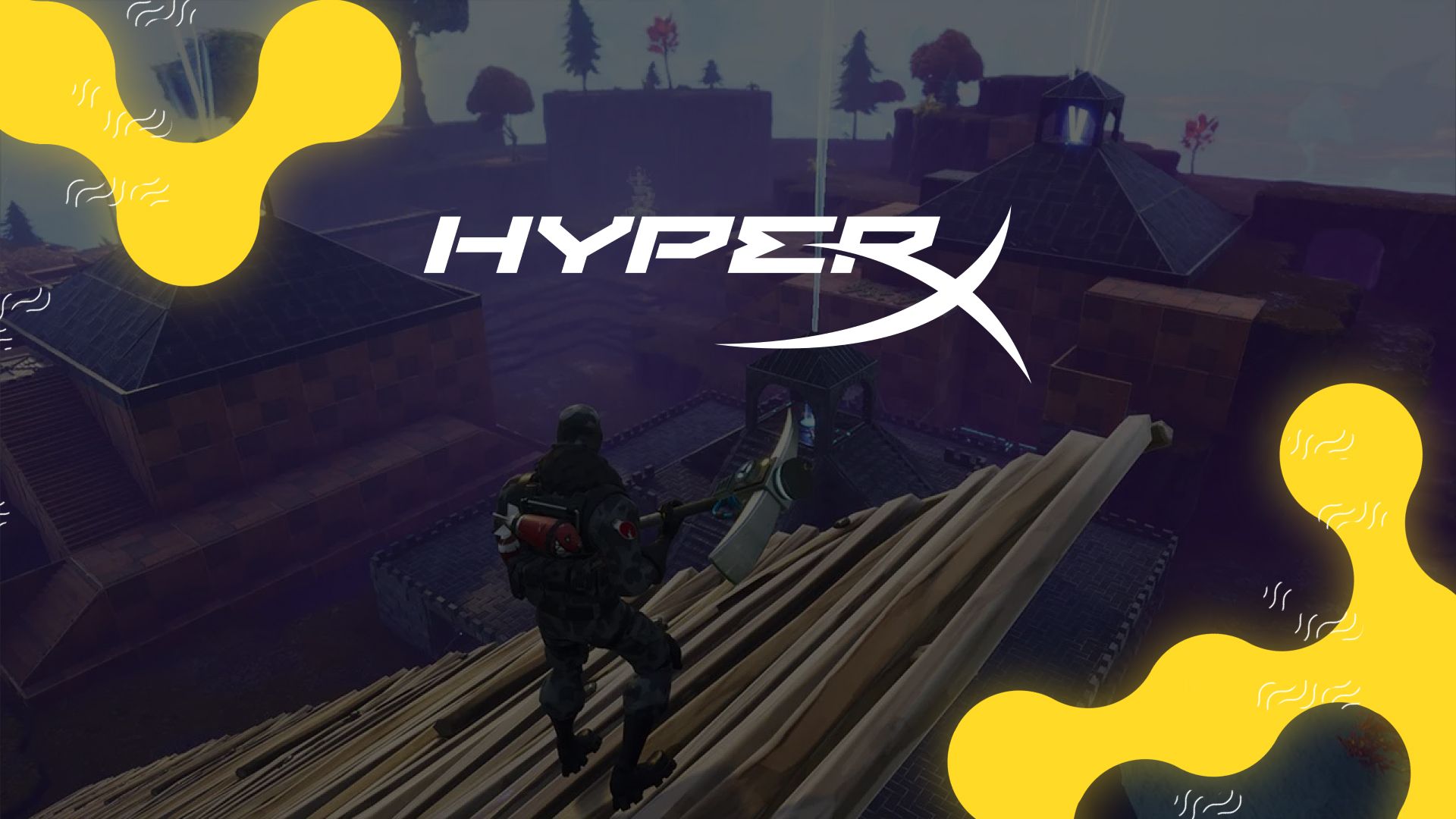