We are halfway through the season and many players are turning to their favorite Arcane champion Jayce in Solo Queue. Unfortunately, his win rate is not great, so it looks like North American players are struggling with Jayce. Luckily, however, Dignitas QNTMPAY’s new top laner, Noh “Gamsu” Yeong-jin has taken note and is here to help you turn the ‘NA Jayce’ memes into the lane-bullying Solo Queue monster that he should be!

Jayce, the Defender of Tomorrow, is one of League of Legends’ most popular Champions, and was a character in the hit Netflix series Arcane. As a result, his popularity has increased again, but there are many players that struggle to use Jayce effectively. We will dive into the basics of Jayce and have Gamsu guide the discussion to highlight the important pieces of information and strategy needed to take full advantage of Jayce’s kit!

When Is Jayce the Right Pick?

To be considered viable, many Champions need the comfort of a high priority teammate in proximity to fall back on. It’s one thing to require jungle priority for Jayce to be a good pick, but to also need mid priority is a lot to ask. This very reason means it is difficult to get Jayce in the right situation to thrive, but if you’re patient and see the opening in the later phases of Champion Select, then Jayce can truly excel!

If you’re hoping to play Jayce, it’s a good idea to offer to pick Champions for teammates when you’re earlier in the pick order. This will give you a better idea if Jayce will have the needed support from your teammates to give him free reign over the lane. This means it’s very challenging to first pick, or even early pick Jayce. A lot needs to go right in Champion Select for Jayce to be in a good position, which is clearly indicated by the winrate Jayce has within Solo Queue!

Jayce is good to pick when you have jungle and mid priority in the early game.

Since you should already have a good idea of the team compositions on both teams when locking in Jayce, you should be able to find the right time to take Conqueror and have a massive advantage from the start of the laning phase. Of course, you can always change your Runes later in the draft phase, but if you’re more comfortable with one of the two Rune options, you can always run that, or simply see if the Rune choice you are comfortable with makes sense in the given draft, and lock in Jayce when it all lines up as you’d like. 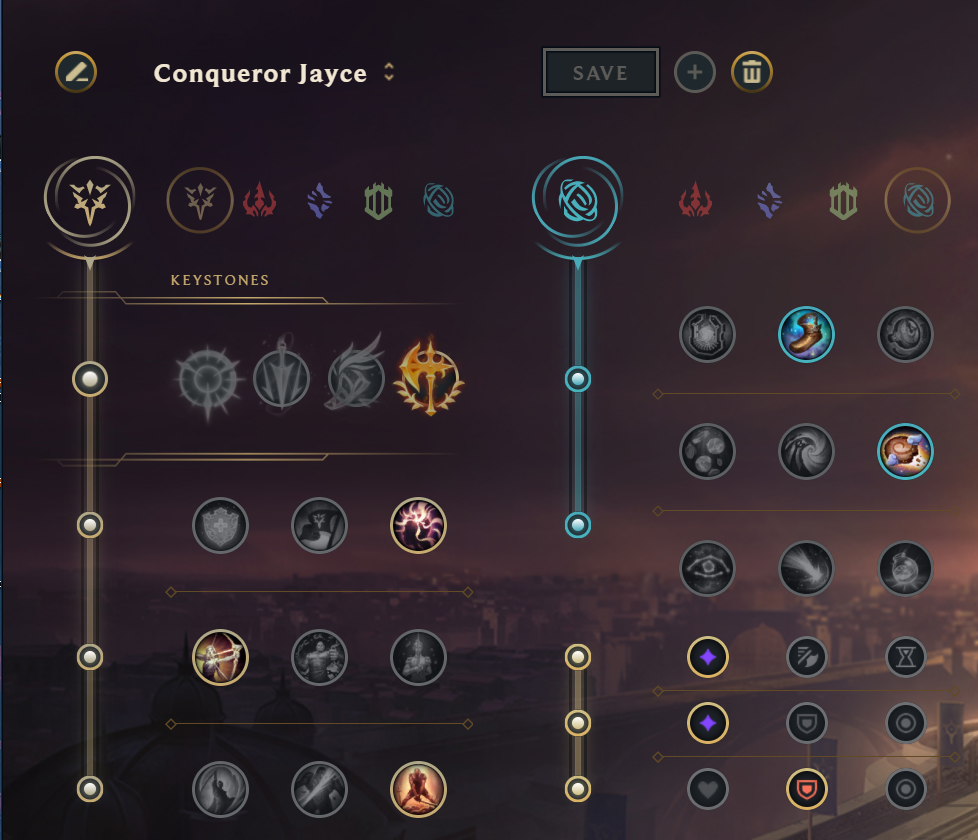 Running Conqueror provides great damage for Jayce while simultaneously giving him some otherwise non-existent sustain! Of course, while this may seem optimal, if you’re not fully stacking Conqueror in lane, it’s not as useful to you. Ideally Jayce will be taking Conqueror when he knows he can take full advantage of his enemy in lane and convert the extra potency for a faster snowball. When taking Conqueror, you’ll also want to take Presence of Mind, Legend: Alacrity, and Last Stand. Last Stand is an underrated option on Jayce because he can soak up some damage while in melee form, and then retreat to the backlines in his ranged form to poke and deal bonus damage while being low on health.

The other, more reliable, option is Phase Rush. Phase Rush is a fantastic and reliable option because it helps curve his scaling to the late game. When hitting an enemy with 3 attacks or abilities within a short duration, the bonus move speed and slow resistance provided is a great way to escape ganks that could otherwise mean certain death. You’ll want to also take Manaflow Band, Absolute Focus, and Gathering Storm. 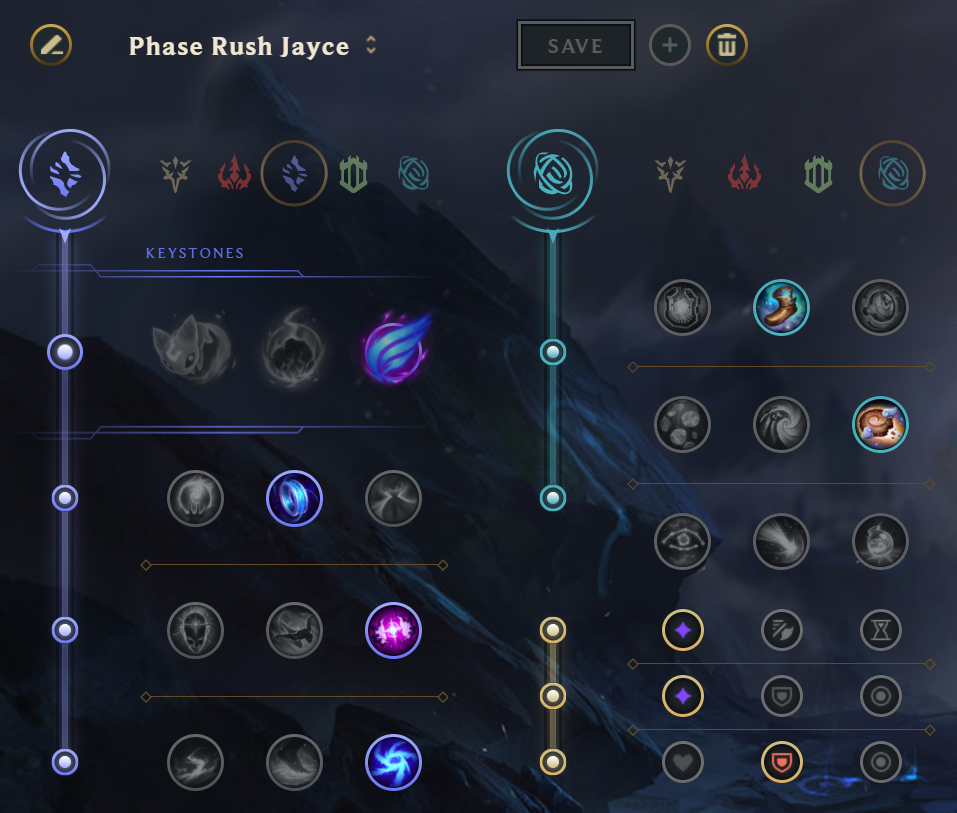 You can take Conqueror and play aggressively. But, I like to take Phase Rush and play for late game because Jayce scales so much!

Without a doubt, Eclipse is the Mythic Item of choice for Jayce. It is by far the best option and should always be the top priority. The two item power spike is Jayce’s core build: Eclipse and Muramana. Ideally, Jayce can complete a Serrated Dirk on the first back and a Tear of the Goddess on the second. If possible, he can also buy both on the first if the back is delayed enough. Jayce should be able to stack up Tear of the Goddess while completing his Mythic Item, then complete the Muramana and grab the Ionian Boots of Lucidity in most cases.

Plated Steelcaps and Mercury’s Treads are both fair defensive boot options, however Mercury’s Treads are really not ideal. It’s fine to just build the Null-Magic Mantle to sit on for the magic resistance rather than completing the boots. Jayce should either be not close enough to get crowd-controlled where the tenacity will matter, or if he is crowd-controlled, there’s a good chance he will die before the stun is removed. 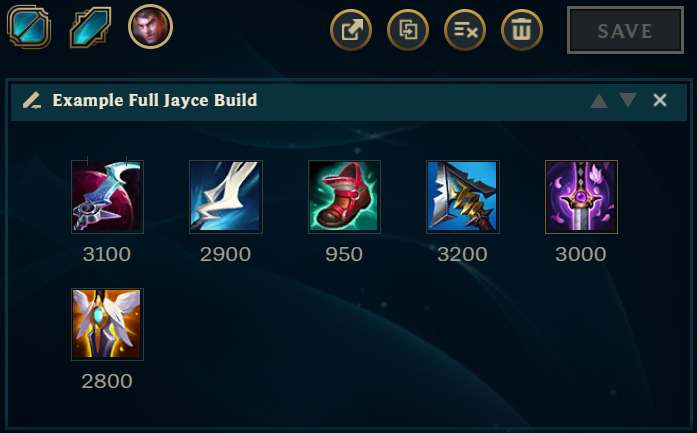 Jayce should always buy Eclipse and Muramana! That’s the most important.

Like previously mentioned, Jayce will only have healing if he takes Conqueror and stacks it. It requires a lot to occur for your Conqueror healing to be a reliable form of sustain. While in winning matchups, he can obviously manipulate the lane to get fully stacked more often, but it’ll be much better to take the consistent option of shoving the lane and recalling when you can. You can use your priority to have recall advantage, and eventually Teleport advantage when they will need to recall and get back to lane to prevent Jayce from getting Turret Plates. When coordinating with your team, Teleport advantage is enough to flat-out win bot lane for your team! This is going to be your best bet for harnessing your lead generated from the lane advantage and translating it into a bot lane lead, and even a Dragon.

Jayce doesn’t have any healing abilities. So, it’s always good to take a base when the lane is pushed up!

Jayce has no form of sustain, and no easy way to escape crowd-control or even apply his own crowd-control to escape a gank. Combining these features of his kit with his squishier nature, and it’s a disastrous setup for a player who doesn’t pay attention to the map and ability cooldowns. As Jayce, Phase Rush can honestly make the difference between life and death when ganked because the burst of move speed is enormous!

“Jayce is hard to play against Champions with good crowd-controlling abilities. Because, Jayce can get ganked really easily with one crowd-control ability.” - Gamsu

How to Play in Tough Matchups

If you can push the wave, you should take a base after!

It’s really this simple. There’s no need to try to push advantages or create them out of thin air as Jayce. Jayce scales really well so there’s no timer you are working against in lane. It’s more than effective to simply survive, gather resources, push the lane when you can, and take a quick base! If you can keep some tempo to try to control the wave whenever possible, you could maximize your gold income by 15 minutes and be in a great position heading into the mid-game.

Once in the middle stages of the game, Jayce has his core items complete and has a lot of potency in the side lanes. Similarly to the early game, Jayce is vulnerable to crowd-control so a rotation from a Support or Jungler means Jayce will suffer greatly. With good preparation however, Jayce can quickly shove the lane and rotate back to the fight when needed!

You can always get side lane priority with Jayce and then use that priority to group up early for poking enemies in fights.

Just like in the mid-game, Jayce wants to continue gathering resources in the side lane when possible and use the tempo advantage to be the first to a fight. If he has the opportunity, a flanking position on a backline carry can easily win the fight, but even by moving right to his teammates, he can play the fight front–to-back and will do just fine!

If your team doesn’t win 5v5, you can always push the side lane first and then come back and look for a flank! Otherwise, it’s better to play front-to-back teamfights and poke the backline when you can. 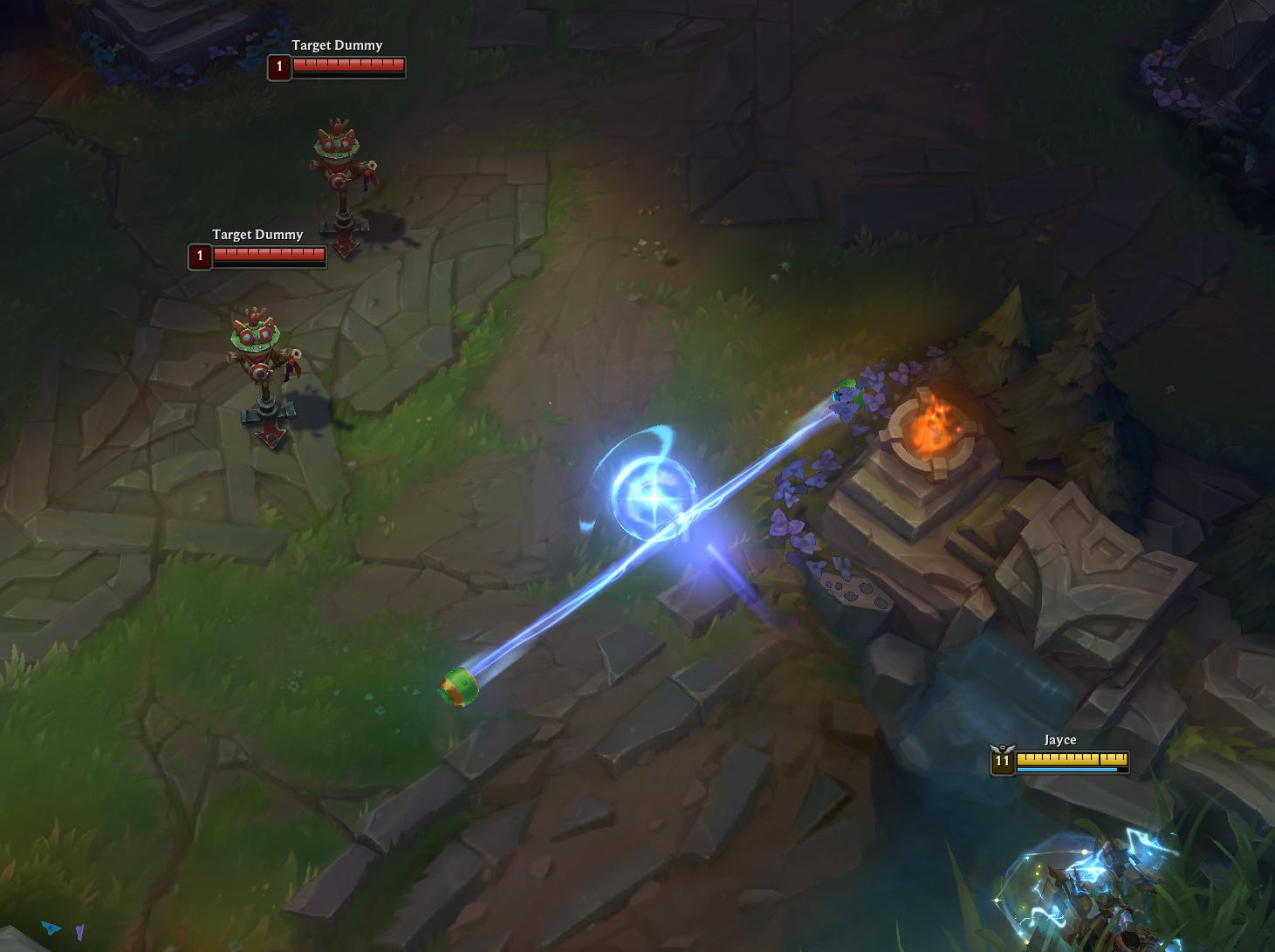 As you’d assume with any Champion that has two forms, there are plenty of ability combinations and interactions that exist. These combinations add to the complexity of the Champion and help those express mastery when chosen and executed in the right moment. That’s what Jayce is all about!

One of the most basic combos that Jayce might want to use in lane is the Q into E combo in Cannon Form to get a faster (and more surprising) Accelerated Shockblast. Another great use of ability comboing with Jayce is to W in Cannon Form right before switching to Hammer Form and jumping onto the enemy with Q. This will keep the increased attack speed for three auto attacks when switching over to Hammer Form and help Jayce transition to his other abilities while comboing down an enemy swiftly! An example of this full combo might be:

More importantly though, there are neat ability tricks that can help maximize efficiency both offensively and defensively. Switching to Hammer Form before tanking a damaging ability will reduce the damage.

After enough time invested into understanding Jayce’s kit and its interactions, any player can pick up Jayce and pilot him well enough that the NA Jayce memes can finally be extinguished! It’s definitely worth the time to learn Jayce and keep him as a weapon in your arsenal (or toolbox)!

Thank you to Gamsu for sitting down with me and discussing the Defender of Tomorrow! If you want to learn more from Gamsu, you can follow him on: 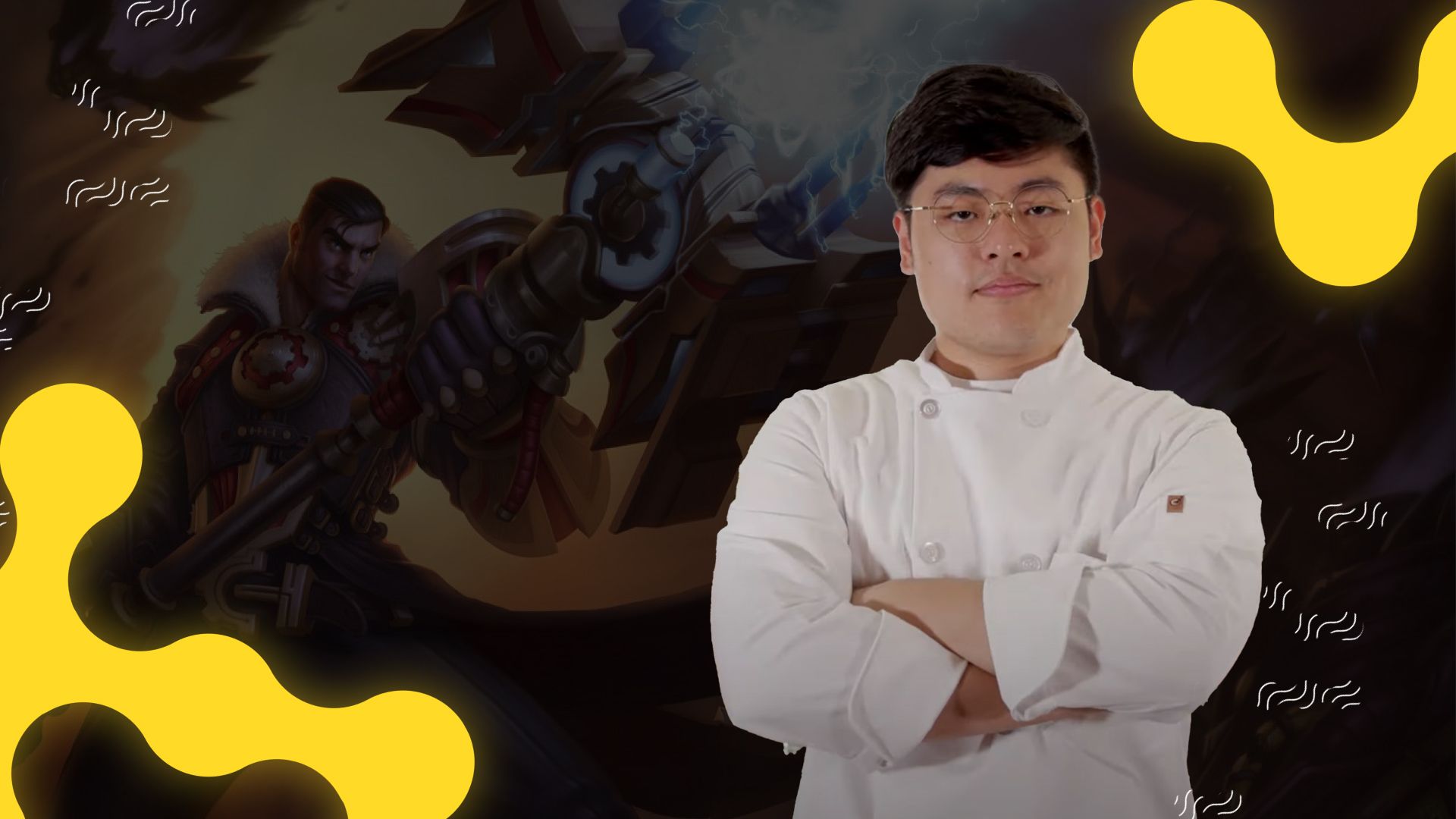