After securing the #1 seed from Europe for the upcoming Mid-Season Brawl, the players from Team Dignitas had some time off. We caught up with Support player Kenn "Zaelia" Rasmussen to hear his thoughts on the competition and the newest Support hero in The Nexus, Deckard Cain.

Team Dignitas is undefeated in Part 2. How do you think you have improved since Part 1?

Zaelia: I'm not even sure we improved, to be honest. We had a lot more shaky series. I think our power level stayed the same, but the other teams were improving a lot. There were so many roster swaps in the first part, but here in Part 2, all the rosters seem to be better at playing together so everybody put up more of a fight. I just think we are the most stable team. I think the meta has not been in our favour, and we have grown a little bit lazy. In Part 1 we lost to Zealots, and almost lost to them in the finals at the Western Clash. We kicked ourselves in the butt and made sure we stayed in shape. It was healthy for us to lose, but I don't think we improved that much.

The newest addition to the Nexus is Deckard Cain, a new Support character. What do you think about Cain so far?

Zaelia: We have not tested him in scrims yet, but from my experience in Hero League he is decent, but he has clear weaknesses. He is strange because in some situations he is really weak, but he still has his spot. He doesn't heal like others Supports. He interacts really well with the right composition and against the right team composition. I don't think he is a hero that you can just pick because he is strong, he really has to fit in. I don't think we are going to see a first pick Deckard ever.

He works really well with a single teammate and he enables Hypercarries. He is very weak to burst and lockdown, he does not have a cleanse, he is not good at keeping Tanks alive. I could see him be good with Blaze because you can jump into the bunker. He is good if nobody dies instantly. He has very strong power spikes; level 13 and level 20 are really strong for him.

Do you think we will see Cain picked at the Mid-Season Brawl?

Zaelia: He is kinda second tier. You have your Malfurion and your Stukov, who are broken, and then you have Cain and Rehgar who are okay, but I think he is very situational. I hope to see him because he is very funny, I enjoy him to be honest.

Do you think Team Dignitas are favourites going into the Mid-Season Brawl?

Zaelia: I'm not sure I would call us the favorites. The season has been kind of sloppy for us, we have been dropping a lot of maps, no series, but a lot of maps. We have played a lot of close series. I could easily see Tempest or Gen.G (KSV) being the more shiny favourites. I would say it's us and Gen.G in the top 2.

While on the topic of Korea, EU and Korea have very similar metas. We recently had an interview with Snitch, who said that EU plays this meta better, would you agree?

Zaelia: I would say so, yes. Sometimes, Korea looks like they don't know what they're doing, it doesn't make much sense. Korea basically taught us in which situations Maiev is good, and we kinda implemented it here at the end of Part 2. We kinda took the good parts of Korea and now we kinda have the best of both worlds. So, I don't know if you can say that we play it better, but I think that the meta suits our playstyle better. Korea plays extremely aggressive, and there are so many ways to punish that.

Stukov will punish you if you take a step too far forward because of his insanely offensive capabilities from a very defensive position. We have the Malfurion and Garrosh to stop everything that dives on us. You basically need Maiev to execute such aggressive compositions and she is the only thing that works against these Heroes. So, I would say that EU plays the meta in a more balanced way and that makes it look better.

Not long ago, former pro player, merryday, announced that he will return from his retirement. What are your thoughts on that?

Zaelia: I was not a pro player for most of the time when he played, I was just grinding HL. I have heard great things, but I didn't get to experience it that much. I think him and Bakery were really close, at least Bakery praised him a lot. I'm excited. I'm just wondering where he's going to fit in and what team is going to be on.

Let's take a look at some of the other regions. The system for the minor regions has been changed, meaning that they will only have two teams at the Mid-Season Brawl. Do you think this means that they will show up stronger?

Zaelia: I hope so, I really do. Everything seems a bit more professional. It looks like the teams are working harder because of that, and I think this new system will encourage the players to try harder. I don't know if I expect the results to be better, but I expect their play to be better. It will be fun!

Let's turn our attention to the teams across the pond in North America. At the Western Clash, NA took several series against EU teams. Do you think NA is catching up? How do you think the gap between EU/Korea and NA/China looks right now?

Zaelia: To me, it looks like NA has had some strange rosters. We had some roster swaps in EU, shuffling everything around, while at the same time in NA it was shuffled as well, but in the right direction. In EU, everything was stable for two years, and then everything went boom! In NA the same thing happened, but everything ended up in the right place. It seems like Team Freedom came out swinging. They didn't get a really good result at LAN, but they looked really strong. You've got Octalysis with the same potential, and then you have the super team in Tempo Storm. Compared to before, I think that with these rosters they can finally compete. I think that this is the year where NA can make a result.

Thanks for taking your time to talk with us, do you have any shoutouts?

Zaelia: GIGA SHOUTOUT to our fans! Thank you for supporting us every week through the season, and then staying around to listen to my weird, long stories. Shoutout to the people who hang out in the #DIGscord during our games, and a big Wowee to you guys! Shoutout to my teammates, and shoutout to Team Dignitas and our sponsors (HyperX, Mountain Dew, WD, Buffalo Wild Wings.) 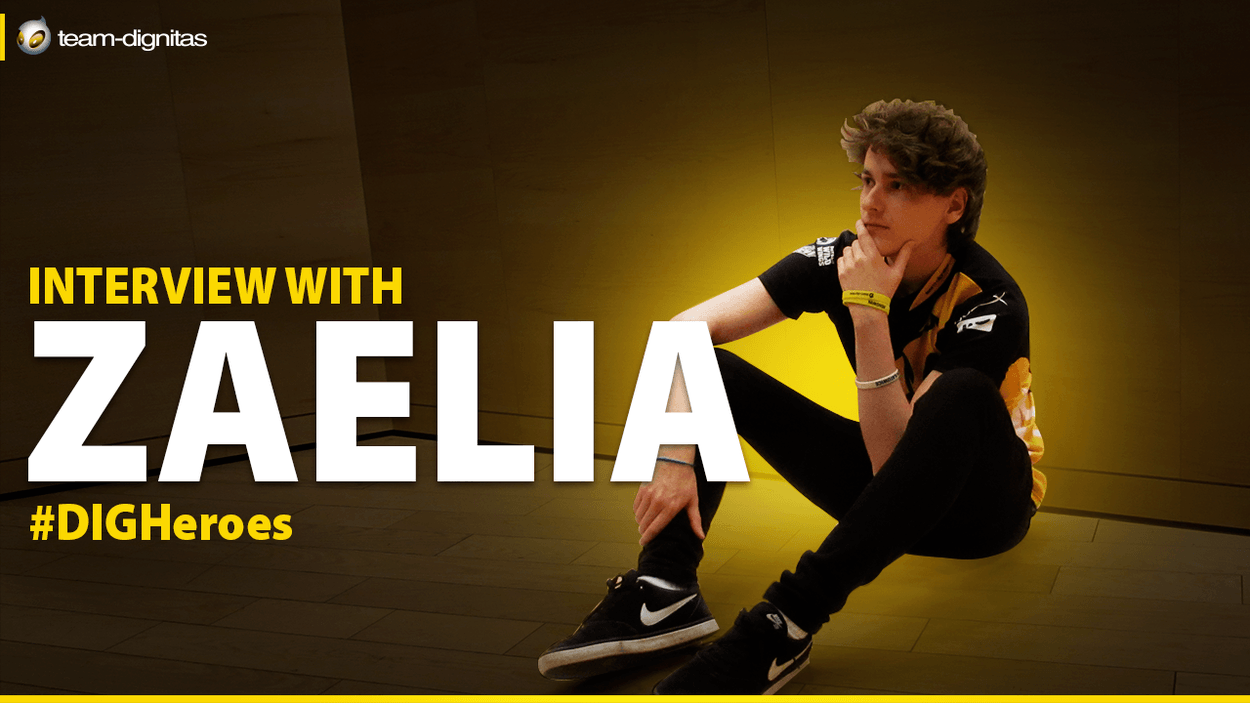