With the Summer Split done and dusted and The Gauntlet right around the corner, I had a chance to talk with Damonte, the Midlaner for Clutch Gaming (CG) in the North American LCS. Read on to see his take on their recent games against CLG and his thoughts about moving forward into the Gauntlet.

How does it feel to be a part of the partnership between CG and Dignitas?

Damonte: It feels great, honestly. I think that Dignitas has added a lot already, especially in the energy in the team which has a lot to do with Michael (Prindiville) and the role that he’s played so far. He’s been a great leader and the entire merger has made everything a lot better, I mean when we were Clutch we were in 9th place and now we’re in 4th place so it’s felt very different. Michael is a big component of the team culture changing- both him and the two new coaches we brought on, I would say, have changed everything entirely.

You finished 9th place in the Spring Split and then turned it around and placed in the top 4 for Summer – what do you think contributed to such a massive turnaround?

Damonte: Well I think our new coaches did an amazing job of coming into the team with only 4 weeks of LCS left to play and they kind of just turned everything on its head. Like, we weren’t even playing well at the beginning of this summer split and then they came in and laid down a lot of new rules, told us how things were going to be, and flipped the entire dynamic of the team over. Since then, we’ve been winning a lot. Their approach to team atmosphere and how they were handling the team helped take all 5 of us and make us click.

It seems like the team is continuously improving and gaining momentum from game to game – do you expect next Split to go even better than this one?

Damonte: Well anything can happen in the long off season, so it’s a little hard to say, but being fully Dignitas next season is going to be a pretty big deal, and I’m sure it’s only going to mean we’ll be performing even or better.

You took on CLG this last weekend in Detroit – how were you and the rest of the team feeling coming into the match?

Damonte: Personally I was pretty confident we were better than CLG but obviously it didn’t end up happening and we lost in a pretty close game. The team as a whole were feeling really good with how we played against Liquid so it was interesting because in all of our matches before that we were the underdogs, there were no real expectations on us, but for this match it kind of felt like we had a lot of fan support behind us and a lot of people thought we actually would win. There was a bit of a different dynamic going into this and I think that contributed to why we weren’t playing up to par.

You then took a 2-0 lead in the best-of-five series in a rather dominating fashion – were you surprised to take such a commanding lead? What was going so well in those first two games?

Damonte: Honestly, I wasn’t too surprised. I think we should’ve ended the series as a 3-0 or 3-1 but those first two games I feel is how all of our games should go, especially against a team that is much slower-paced like CLG.

CLG ended up coming back with the reverse sweep and winning 3-2. Talk to me about your perspective here; what do you think started going so right for them?

Damonte: I think it completely switched on its head around game 3. In the first two games we were making them play our game and then for the rest of the series they kind of made us play their game. Games started dragging out a little bit longer and they were gaining random advantages that we weren’t giving away before as we were focusing a little bit less on our fundamentals, like as soon as we started losing our fundamentals the games just felt a lot harder; CLG is a team that is very good at punishing another team when they make a mistake.

How do you feel you personally played during the whole Summer Split and in playoffs?

Damonte: For the whole Summer Split I feel like I had my ups and downs. The first half of the split was definitely not as good as the later half, but I would say for playoffs I played pretty well. I got to play a lot of games against some of the best and most historic mid-laners like Jensen and Bjergsen who have been to worlds a whole bunch of times and shown that they are some of the greats, and it made me feel like I could have done a lot better but for the most part it was a pretty good show.

Obviously, the goal now is to make Worlds and the first stop on that road is September 6th in a best-of-five against FlyQuest. How will you and the rest of the team be preparing and how are you feeling as of right now going up against them?

Damonte: Well, I would say it’s going to be a bit tricky because the further we go in the Gauntlet the more the other teams will be able to see our strategies. As for FlyQuest, this is a team that has come 9th in the Summer Split so they’ve had a lot of time off. Grinding for a month without any games is very hard in any pro sport so this can go one of two ways; they’ll either have honed in on their practice and put up a good fight or they’re just going to roll over and die, but it’s hard to know too much more about that team.

The winner of that match will take on CLG, putting you in a position for a potential rematch. How much does this affect your mentality coming into the matchup? Is there a drive from the team to take some revenge?

Damonte: Yeah I think everyone wants to prove that we are not worse than CLG so getting that rematch is going to be super important and I’m sure everyone else on my team is going to feel the same.

If you make it past CLG, you’ll then play TSM in the finals to claim that third LCS spot at Worlds. Having beaten them recently in playoffs, are you feeling pretty confident that you could take them down again?

Damonte: Yeah definitely, I would say that we were favourites in every best of 5 except against CLG and even then we as a team thought we were better than them. I think TSM is kind of similar to FlyQuest though, they lost pretty early in playoffs and have had a lot of time off so it’s just the same thing where they can either be much better or they could get frustrated, and if they come back the same as they were before then it shouldn’t be too difficult to beat them.

Without diving too much into specifics, is there anything in particular that you as a team will be focusing on in preparing for the Gauntlet?

Damonte: I think going into these games we’re really just trying to focus on ourselves. At the end of the day we have to play 3 best-of-5’s and that means that all of the teams are going to have a lot of information on how we play, what our priority is and stuff like that. Honestly we can’t go into these 3 days with a couple of champions that we can get some cheese wins on because that means that by the next day the other teams will know.

If you make Worlds, is there any team or player out there that you’d really like to play against?

Damonte: I really want to play against Caps. I think I’ve learned a lot from watching him and it seems like he’s the best midlaner in the world right now.

As a final question let me throw a fun one at you – we know you’re a God on Qiyana, but if you could only play one champion for the rest of your League career, who are you picking?

Damonte: For the rest of my League career?? Well, probably Zed. Zed is just such a fun champion who’s usually pretty good even though it’s hard to play him against a lot of other champions and players.

Thank you so much for taking the time to answer some questions for us! Is there anyone you'd like to give a shoutout to?

Damonte: Shoutout to all of Dignitas and everyone who works here and helps out with LCS and anything like that- you guys have made a huge difference in the Summer Split.

We'd like to thank Damonte for taking the time to chat with us and giving us an inside look at one of North America's most prolific young Midlaners. We wish Damonte and the team the best of luck for the upcoming Gauntlet, and hope you can all be there to cheer them on too! 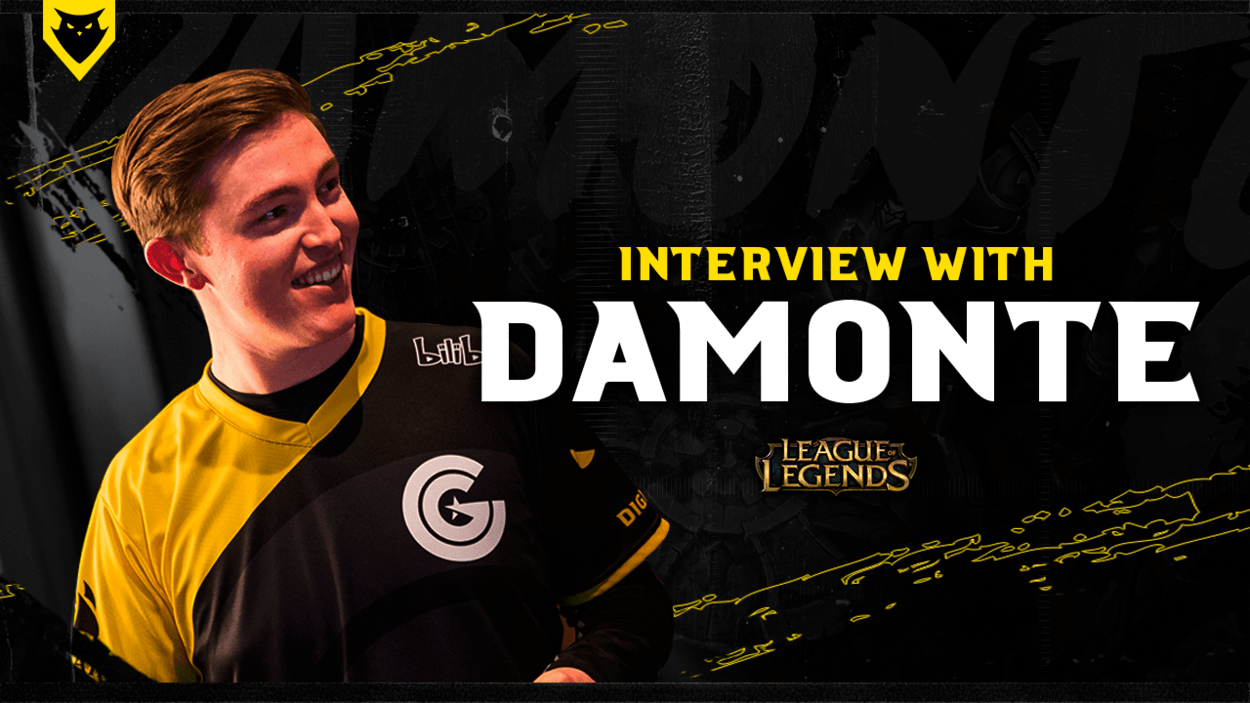