Nate "Ataraxia" Mark was just brought on as one of the two new editions to the Dignitas SMITE roster. He will take over the empty Hunter spot and has proven himself as one of the most successful SMITE players in the world. I chatted with him about his feelings on joining with Dignitas, his previous successes, and how he and the team are preparing to make a successful run this coming season.

You began your professional SMITE career back in 2013. What was the initial appeal of the game to you and had you been playing anything previously that took up the majority of your time?

Ataraxia: I got originally got into SMITE back in the summer of 2012. My brother was home from uni, we’ve spent our entire childhood playing games together and against each other and had always been really competitive with each other. Since he’d gone away to uni, we hadn’t been able to keep up with the games like we used to, so when he was home he gave me a beta key. It was a great chance to play some games like we used to, but more importantly, prove that I was better at it!

Before SMITE, I spent a ton of time playing Starcraft 2. I got pretty good at it, getting to Masters on the EU ladder playing Terran. Having the discipline to learn and improve at Starcraft, as well as listening and learning about life from the one and only Sean “Day9” Plott taught me a lot about what’s important to me and directly gave me the mindset and skills that helped me succeed at SMITE.

You’re one of the most seasoned SPL players and one of the most winningest players in the United Kingdom. What would you say has attributed to all of your success so far?

Ataraxia: I put it down to mindset, mostly. I touched on it in the last question, but I can’t give enough credit to Day9. Grinding ladder in Starcraft, watching back replays, catching his Day9 Daily and then starting the process all over taught me a lot about discipline and working hard to achieve what you want. Maintaining a balanced and healthy mind with the ability to not only self-criticize and receive criticism, but to seek it out to better yourself has been the key for what makes me successful. I try my best to apply this to Smite, even 6 years into my career. There’s always more to learn and ways to improve, and you can often find inspiration in the most unlikely places. It’s definitely different for everyone, but that’s what works for me!

The final rosters were just announced for this coming season and you’re now going to be hunting under the Dignitas banner. What does it mean to you to be a part of the organization?

Ataraxia: It’s been fantastic so far! In my short time at Dignitas, I feel so incredibly welcome. I’m not talking about the team, I’ve known them for years even if we haven’t all played together before and they’re like old friends, but I’ve never felt so immediately part of a family, excuse the cliche, as I have with you guys. A week after signing the dotted line, I received a Christmas card from everyone at Dignitas, and it was handwritten! An organisation that large, sending their new SMITE player a handwritten Christmas card. Loved it!

What was the process like in being brought on?

Ataraxia: It was a confusing time, for me at least. With the news that Season 6 would be exclusively at LAN, and that anyone wanting to compete (and I mean actually compete, not just cash in on the salary) would have to move to the US for a chance, I was torn about what to do for a very long time. We had heard the announcement months before, and for the remainder of the fall split, I couldn’t stop thinking about what the next year would mean for me. I have an established life at home, a long-term girlfriend who wouldn’t want to move to the US, but at the same time, it’s my dream job. I spoke to her a lot about it before and after S5 finished, and she really pushed me not to give up and that we could manage long distance for a year.

The conclusion I came to was I would only join a team that I KNEW I could win with, a team that would bond well together and, most importantly, a support player I knew I would pop off with. I’ve played with a lot of supports over the years, but I’ve never had the same success in lane that I’ve had with EmilZy, and I missed that. I decided that there were only two supports I’d play Season 6 with this year, and if neither would have me then I’d call it quits and retire. One was EmilZy, the other was Trix. I’d never played with Trix outside of ranked and the like, but we’ve always gotten along great at events and I think we have really complimentary ways of looking into the game. I’ve always had this feeling in my gut that if we teamed together, we’d click instantly and run that lane and I can’t wait for us to prove this true.

I reached out to Harry (Variety) and EmilZy to see what my odds are with either, and things moved pretty quickly from there. Harry told me that they were making changes, and they wanted me in. As soon as he said that they wanted me, I was sold and didn’t look back. I loved playing with Harry back in Season 3, I’ve always wanted to team up with Trix and Qvo since I started playing, and I have a ton of respect for Biggy just for being able to work with these idiots! Hurriwind was brought in after me, and I can’t wait to see what he can do this year. He’s always been doing education side by side with being a pro player and is one of the few who managed to actually get a degree while remaining a pro. Now that he’s finished with school, he’s got nothing but SMITE to focus on and I’ve no doubt in my mind this’ll be his best year yet.

Any thoughts on some of the other roster announcements from different organizations? Any team(s) that you’re specifically excited to play against?

Ataraxia: There’s a few I’m really keen to play against! There’s two teams I can’t wait to see how they do, and that’s the new Rival and Renegades squads. Rival has CaptainTwig on it, and he’s one of the biggest brains in SMITE. He’s teamed up with PBM, another big brain, and I can’t wait to see whether their genius leads them to success or to madness. I’m expecting some wild things out of that team for sure.

I’m excited for Renegades for a few reasons. Raffer and I didn’t mesh that well in duo lane in retrospect, and while we’re both fantastic players in our own rights, it’s proof that you need the proper chemistry to succeed in the duo lane. You can’t just slap two great players together and see results. However, he definitely has that chemistry with Funball and I think they’re gonna do great things together. I’m also hopeful for Cherryo, that dude deserves a win more than most and I’m really happy to see him be able to make the move to the US. He always kills it at LAN, and I think with a full year to focus on SMITE in a team environment is going to turn him into an all-star.

You’ve played with Variety in the past. Are you excited to be teamed up with him again?

Ataraxia: Absolutely! Even though I only got to play with Harry for a year, but it was an insane year and we really made our mark. Harry overcame a lot in that year, he was barraged with negative feedback about how good he was as a player and he proved all the doubters wrong. He’s the unstoppable train in the solo lane and after two years of playing against him, I’m just glad he’s back on my side!

Hurriwind was also picked up as the other new member of Dignitas. What do you feel about him joining the team and what do you think he can bring to the table?

Ataraxia: This is Hurri’s year to prove what he can do. Hurri’s always had school alongside SMITE, and he’s managed to succeed at both simultaneously. He very recently graduated, and this will be his first season of solely focusing on SMITE. I think the kind of discipline and determination it takes to accomplish that is rare, and I have really high hopes of what he’ll achieve alongside us. To quote my old coach Hayzer, “They don’t just hand out degrees to anyone y’know,” so I’m pretty sure Hurri’s gonna bring some big-brained ideas to the table, and hopefully, some more big-brained Janus jukes like he did to Fineokay!

Do you think the “meshing” process will be pretty smooth in getting you guys all on the right page as far as roles, strategies, communication, etc?

Ataraxia: I think we’re all gonna click pretty quickly. There’s a lot of synergy and trust that’s been built before we formed this current iteration, with Qvo, Trix and Harry all having played together for a long time now and Harry and I have played together before. Hurri and I have to fit in, but we’ll have Biggy to sort us out and I’m confident he’ll get us playing like a 5-man unit in no time at all. When we’re all living together and under one roof, coaches will become even more important and that’s when Biggy really gets to shine and help us achieve the goal of being a championship winning team.

Have you guys began practicing and scrimming together already? If so, how has that been going?

Ataraxia: We’re eagerly waiting news of Season 6 before we get into the real practice, but we have been tearing up the Assault scene together! I’ve always hated Assault, it’s definitely a D tier casual mode (Siege S+) but these boys make it bearable. If that isn’t love, then I don’t know what is.

What are your goals for this coming season; both personally and for the team?

Ataraxia: To win a world championship! It’s going to be a hard year, I’m leaving a lot behind to pursue this dream and I’ll be giving it everything to make sure it was worth it. This year is about finally winning that World Championship title, and my personal goal is to ensure I am maintaining the discipline necessary to achieve that.

Thank you so much for taking the time to answer some questions! Is there anyone that you would like to give a shoutout to?

Ataraxia: My pleasure! I’d like to give a shout out to PrettyPriMe. This is the first team I’ve been on without him, and my first chance to see if I can swim without him. He has been my rock for my entire career and I doubt I’d have this opportunity if it wasn’t for him carrying me all these years.

Be sure and follow Ataraxia below to keep up with him and Dignitas SMITE! 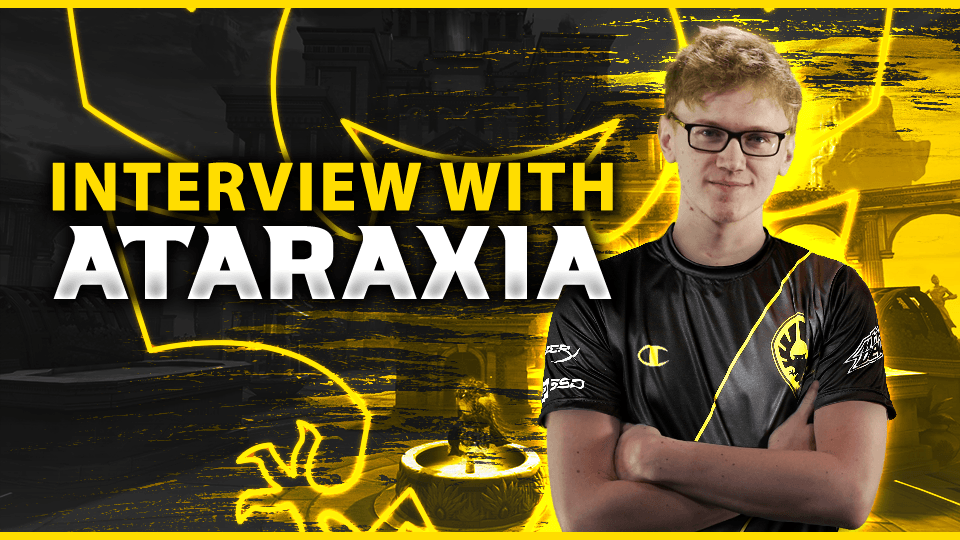