The culmination of this year’s PUBG esports calendar is about to occur in Incheon, as thirty-two teams from across the globe gather to determine this year’s World Champion. Dignitas’ PUBG team qualified through strong performances in PCS 4 and 5 and has made its way to South Korea for the event. I got the chance to sit down (virtually, they’re in quarantine) with Joe “Honeybadger” Haylock and ask them a few questions about their quarantine, meeting the squad in person, and how they’re feeling about the upcoming event.

Thanks for taking the time to meet with me today! I know you are busy preparing for the initial ranking lobby, so I really appreciate it. Let’s start with talking about getting into Korea – even though we’re at a LAN, there are still precautions due to the ongoing pandemic. How has the initial quarantine period been?

Honeybadger: Oh, God. (laughs) The quarantine’s been both easier in some aspects, but also much more difficult in others. I didn’t expect the biggest challenge to be food. I thought it was going to be going stir crazy, but actually, just eating cold rice and cold spaghetti for breakfast has definitely been the most difficult part. Luckily, when we got here, we had PCs, so I’ve just been kind of grinding PUBG and playing scrims with the team every day to pass my time.

What’s the first thing you’re going to do when the quarantine is over?

Honeybadger: We actually have a team day set up. So we all are out on the 13th, we get out on different days but on the 13th we’ll all be out. And we’ve all agreed we’re doing three things. We’re gonna get a massage, we’re gonna go to a buffet, and we might have some drinks. Those are the three things we’re going to do to boost team morale.

Now, the team has been playing together as a quartet since May, but this will be the first LAN with the squad. How excited are you to meet your entire team in person for the first time?

Honeybadger: I’m beyond excited! My teammates annoy the fuck out of me online, and I’m sure they’ll do the same in person, but being able to see someone’s face makes difficult conversations much easier. It makes funny moments that much funnier. It’s just everything is amplified.

Let’s get into the main event. PGC is a long event – over a month of games played against thirty-one different teams – in theory, the team could play six full days of matches in a week [winning Bottom 16, late winner in Weekly Survival, Weekly Finals]. Is there anything different the team is doing to prepare for the event?

Honeybadger: Just keeping attitude light, I think, is really important. I think this tournament is less about how talented you are, considering every team here is on a really high level, and more so about how you’re able to handle the mental strain of such a long event. It’s not like a five-day event which is just full blitz, you can put your all into it. It’s definitely the expression of it being like a marathon and not a sprint.

Honeybadger: We’re planning on being in good contact with Dignitas’ recommended sports psychologist… I don’t know if you know Lenny?

Honeybadger: Yeah, so we’re planning on having lots of Len-me meetings, that’s like our team’s fallback if we’re ever having a rough time. But honestly, it’s just not reading into things too much. You know, in order to keep a positive team dynamic, you have to just understand that every one of your teammates wants to win no matter the outcome of a day. If you have a rough day, you have to not take it personally or blame each other, because everyone wants to win just the same as you. And that’s the main thing.

International events often bring about a clash in playstyles, and teams adapt to the combined meta of the lobby as the weeks go on. You guys have been in some of the pre-event scrimmage lobbies, do you feel like you have a read on how the meta might develop?

We’ve seen some teams publicly announce changes in their drop-sites so to avoid competition in the early minutes of each game. Now, I won’t ask you to go into detail and leak any of your strats, but do you think you will need to make some changes in your playstyle and gameplan compared to how you were playing during PCS 5 and what sort of calculus goes into making those decisions?

Honeybadger: That’s a really good question. We’ve actually already began to transition into what we would consider our PGC drops. Because of North America, in my opinion, being a little bit of a weaker region, we took very greedy splits during PCS and during our own [regional events], that now we’re going to have to consolidate and pick safer and more realistic spots for an international level. We’re going to have to fight for all of them, and we have been fighting in the scrimmages. But we’ve made really, in my opinion, quite good decisions as to the type of teams we’re hot-dropping. Now, we’ve decided to pick teams that although they’re very confident, I think they’re all smart enough to not want to fight and bicker over a drop spot for the event. So, it should all work out okay, I think.

Are there any teams you’re particularly excited about facing in a lobby?

Honeybadger: To be honest with you, all of the good ones. I’ve spent a lot of my career excited to compete on an international stage. Obviously, different teams rise and fall depending on the month or the tournament, but whoever the top teams are right now in each region, that’s who we’re always looking to be better than. That’s the VPs, the PeRos, the Gen.Gs, and the Soniqs, as well as teams like Fury and Buriram from APAC. Just all of the top teams from every region, I’m very excited to play against.

The big change at PGC is that we’re shifting back to a hybrid format, where Weekly Survival games are win-and-in for the Weekly Finals, which are SUPER, similar to PGI.S. The shift between the formats, how do you think that’s going to affect your decision-making during games?

Honeybadger: I think, obviously we played Most Chicken format during PCS, but it’s a little different to Winner Winner in terms of that the score doesn’t carry over. So you win one game, and that’s it you’re done. Whereas, Most Chicken, you win a game, and you go into the next and you keep trying to win. So I think teams are going to play very different to what I’m used to. I expect some adjustment period. I honestly can’t say anything specific because this is my first big event like this, personally. My teammates are all very experience in it, but for me this is my first time. I think I’m just going to have to trust my teammates and really value what they say in their experience.

But what I do know is that when SUPER comes around, we all know how to play that and I’m really excited, because our team – we came together at the start of the year before the Most Chicken and Winner Winner Chicken Dinner was all in full effect, and we’re designed to be a SUPER team. We like kills, and we like fragging out, so I’m really excited about that.

What are your expectations for the event going into the Rank Decision matches?

Honeybadger: I haven’t actually put much thought into Rank Decision. I’m kind of… I guess I can give my expectations over all?

For the final question, I want to talk about the feature being introduced in the patch the tournament is being held on – carrying. Do you foresee any case where you’re going to have to literally carry your team?

Honeybadger: (laughs) I mean the scrims have been exciting already. It might not seem like a big difference and, to be honest with you, it’s very nuanced. There’s only a few games where it really affects it, but when it does come into play, it’s very entertaining having spent years of just, “Oh, leave me, leave me,” to “I’m carrying you.” (chuckles) It’s definitely a nice change. Changes like that keep you really on your feet in terms of rethinking how you evaluate fundamental parts of the game. Stuff that’s really bread and butter to you, you have to rethink them and actually think actively.

I really appreciate you taking the time to answer my questions! Do you have any shoutouts before we go?

Honeybadger: A shoutout to all the Dignitas fans, especially all the Brazilian fans who are very vocal, to Dignitas, for giving us the opportunity to represent them, and a shoutout to my family and to Greta, my girlfriend. You know, she’s here with us and very, very supportive. So, yeah, I’m really just excited to represent Dig!

Thank you again to Honeybadger, and good luck to all the boys as they drop into action on November 19th as a member of Group C, alongside Bao Nam United, Na’Vi, KPI (formerly FIUMBA), and Petrichor Road. Matches for the Ranked Decision start at 5 AM EST for Groups C and D, and you can watch it live here on Twitch. Keep an eye on Honeybadger’s Twitter and Youtube to follow him during the event, follow Dignitas’ Twitter for live coverage of the event, and join us in the Digscord to watch with fellow Dignitas fans! 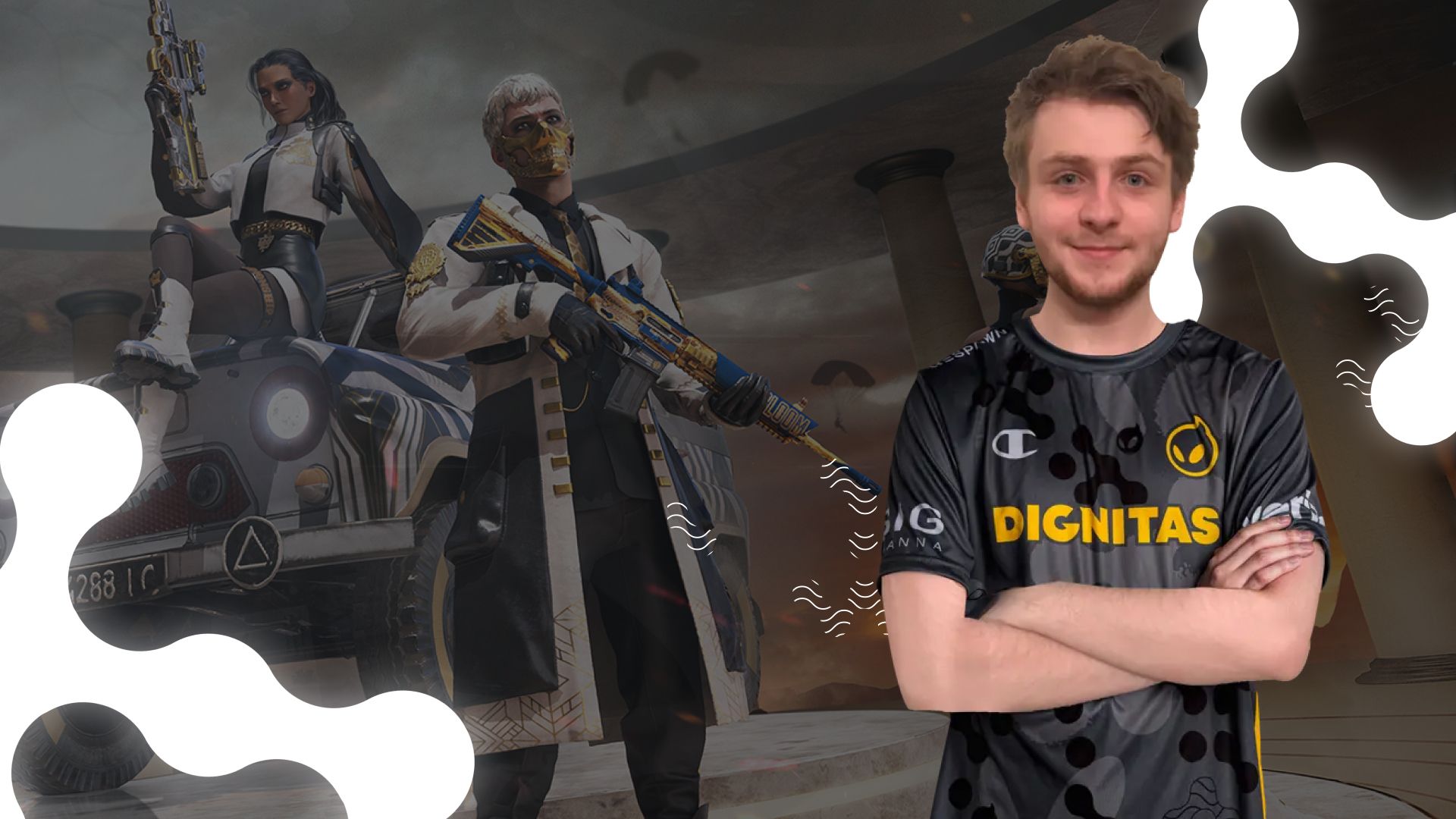