60 percent boards are convenient in that they allow for far more room on your desk, can provide more comfort when playing games, and have a compact, all-in-one feel thanks to the lack of extra, single-function keys that the 60 percent keyboard removes. The fact that gamers’ arms will naturally be closer together when using a 60 percent or other small board means these small keebs can inherently provide a more comfortable experience, a really nice benefit when you’re gaming for long periods of time.

Perhaps the most noteworthy property of the HyperX Alloy Origins 60 percent keyboard is its exceptional sturdiness. The fully-aluminum frame of the keyboard is unwavering during long or frenetic gaming sessions, barely moving at all thanks to not only its impressively stout weight, but its two-step flip-up feet, as well — which can be used to lock the keyboard into three different tilt angles.

It’s noteworthy that while the 60 percent variation of HyperX’s Alloy Origins keyboard is certainly smaller than its predecessors, it’s still a noticeably heavy board. Clocking in at 781g, the Alloy Origins 60 is just a few hundred grams lighter than its full-sized companion.

The general design of the keyboard is sleek and neat around the edges. With no hard-cut corners or overarching plastic frame, the Alloy Origins 60 is pleasing to look at, above all else.

And frankly, that’s an important factor to take into account when you’re investing in a keyboard. Having a part of your peripheral setup look unappealing is definitely a mood-killer, and that’s something you don’t have to worry about with the HyperX Alloy Origins 60. In fact, I found myself just looking at the board from time to time, admiring how much pizzazz the full aluminum frame added to the picture.

Additionally, I highly recommend adding the replaceable topographically-designed space bar keycap that’s included in the packaging to the board. There’s something about the way the RGB lighting hits the space bar that ups the prettiness of the board. I would have personally preferred that the well-designed extra space bar was already applied to the keyboard, but I digress. 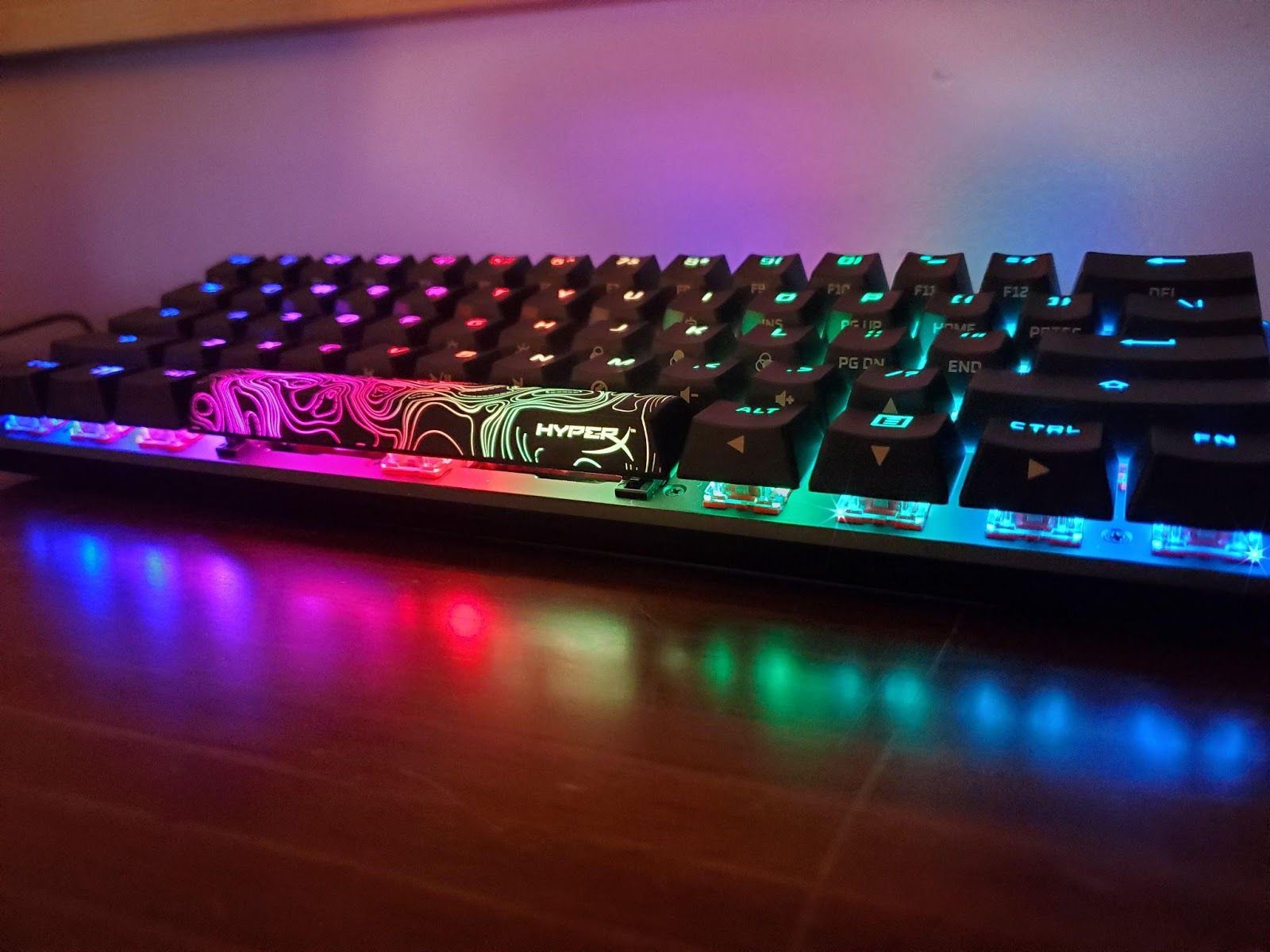 The Alloy Origins 60 also boasts HyperX’s signature Red switches, something it has in common with some of the other members of the Alloy family. While gamers and mechanical keyboard enthusiasts will always have a certain switch that they personally prefer above all other competitors, the quality and balanced versatility of HyperX’s red switches should appeal to most, regardless of their prior experience and game genre of choice.

The responsiveness of HyperX’s Red switches is another noteworthy point of interest, with an actuation force of 45 grams and a 1.8mm actuation point, a commonality that the Reds share with their HyperX Blue and Aqua key switch siblings.

One of the areas where HyperX Red switches definitely stand out is their durability. HyperX’s switches boast a lifespan of approximately 80 million clicks, a significant number more than most other mechanical switches on the market. (If you’re doing the math, that’s 2 presses a second, every second, for more than an entire year.) This extensive reliability found on HyperX’s red switches should give Alloy Origins 60 users — especially those who may be prioritizing usage in lengthy gaming sessions — a ton of payoff from their investment.

The HyperX Alloy Origins 60 also offers some relatively robust options in the customization department for those keys via HyperX’s in-house NGENUITY software. Remap keys, customize your RGB lighting, create macros, and save them to preset profiles using NGENUITY. 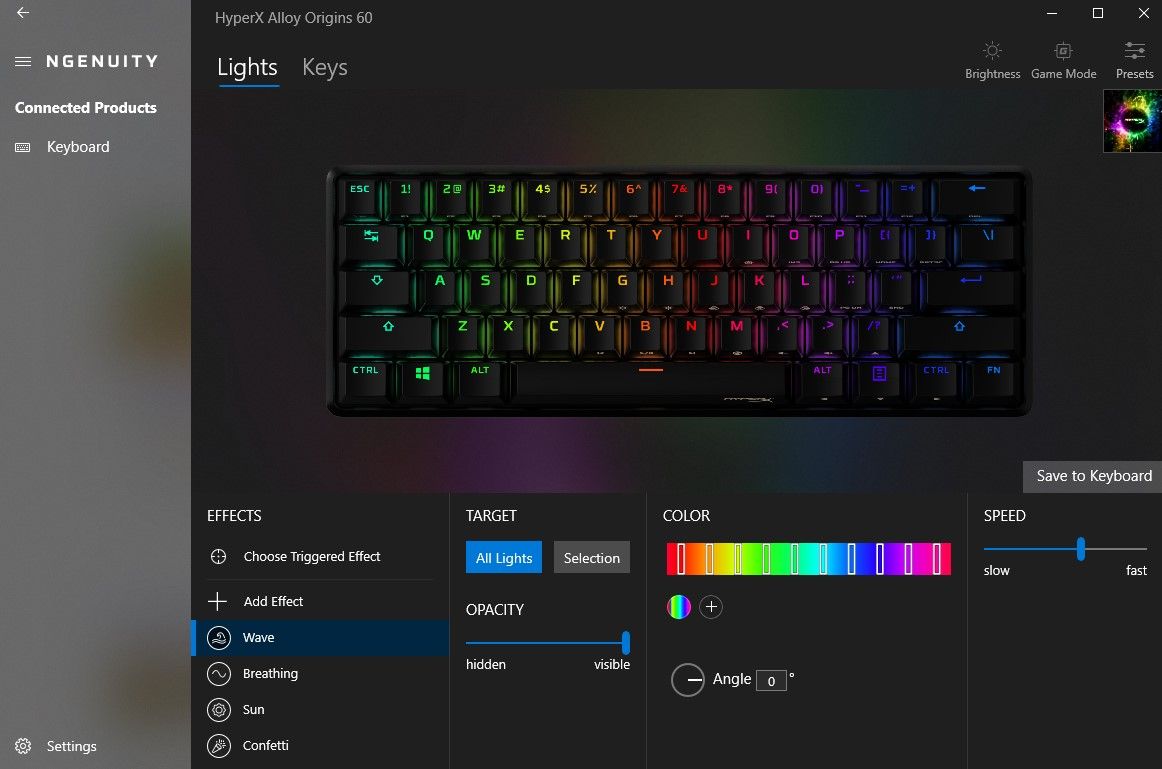 Additionally, if you own any other HyperX peripherals, notably including a HyperX mouse, you can customize your RGB settings, button mapping, and DPI settings through NGENUITY. Essentially speaking, NGENUITY brings to the table everything that other peripheral customization software does.

The only bone to pick when it comes to customization options for the Alloy Origins 60 is that there aren’t nearly enough profile options to choose from. Sure, you have the option to create custom profiles to go along with your keyboard, but the numbers in which you can do so are incredibly limited.

Keep in mind, though, that the heaviness of the Alloy Origins 60 might make travelling with the keyboard a bit tougher than expected. Still, once you get used to the weight, there shouldn’t be too much of an issue.

But perhaps the most notable added feature the keyboard has to offer is the previously mentioned extra space bar keycap. The RGB-enhanced extra space bar, which features an incredibly unique design of a topographic map, can be replaced after removing the default space bar. 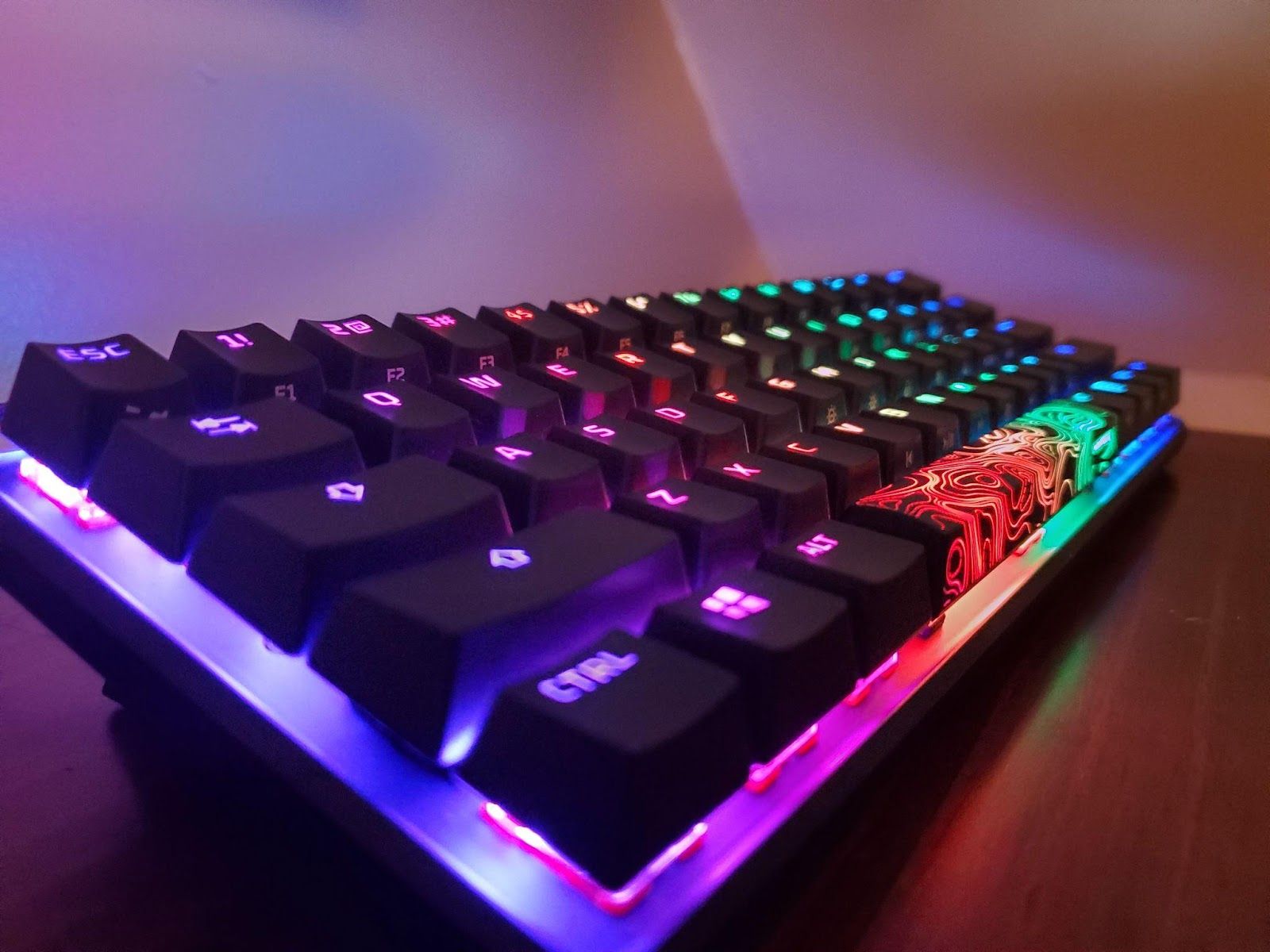 In total, there’s a lot to like about HyperX’s new 60 percent keyboard in the Alloy Origins line. From its incredibly sturdy build, to reactive and versatile switches, as well as several flashy features including its unique replaceable space bar, the Alloy Origins 60 is a well-rounded build that’s immensely attractive to the naked eye.

The Alloy Origins 60 retails for $99.99, a relatively affordable and attractive price when compared to other 60 percent keyboards from other major manufacturers. 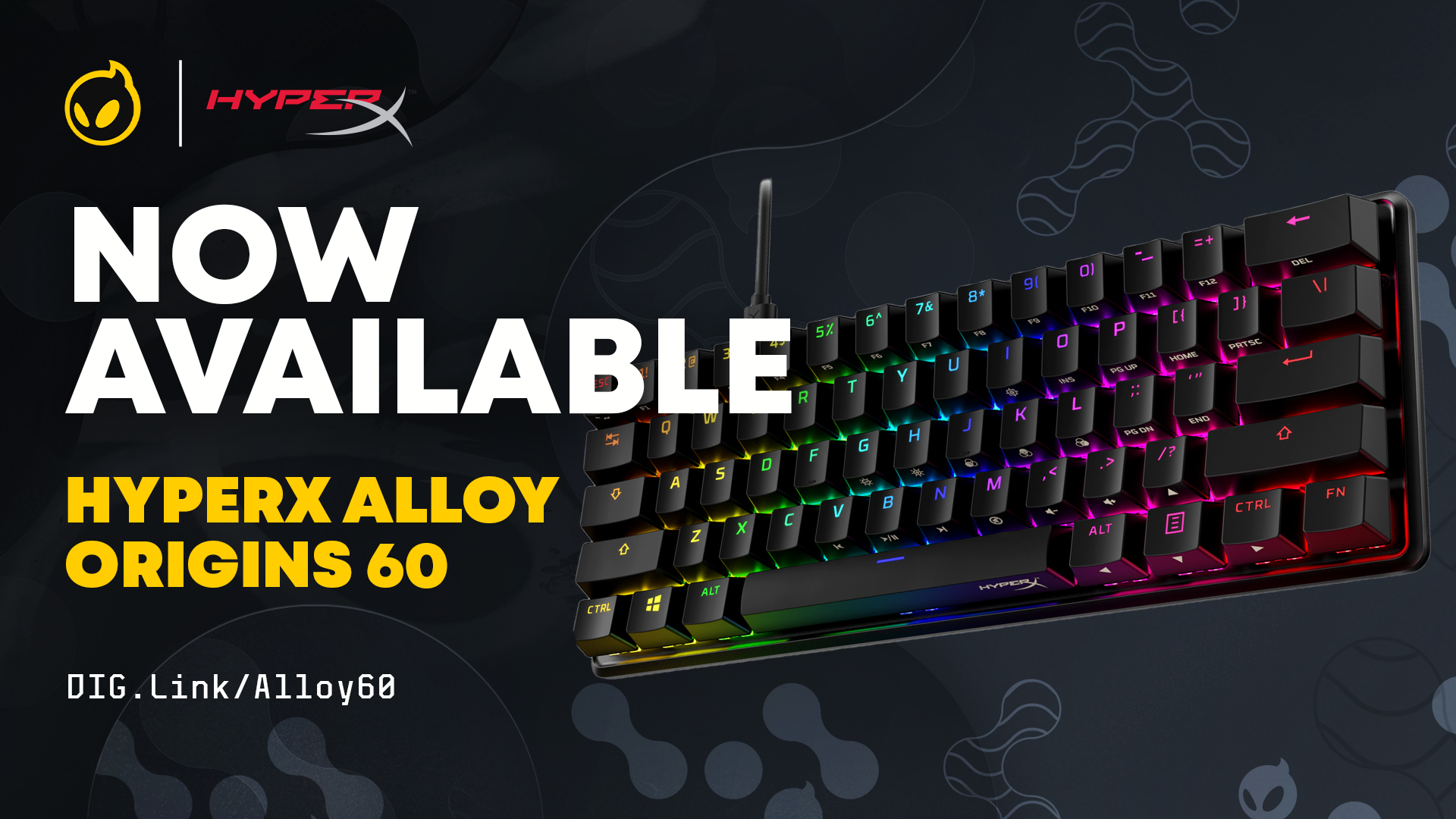 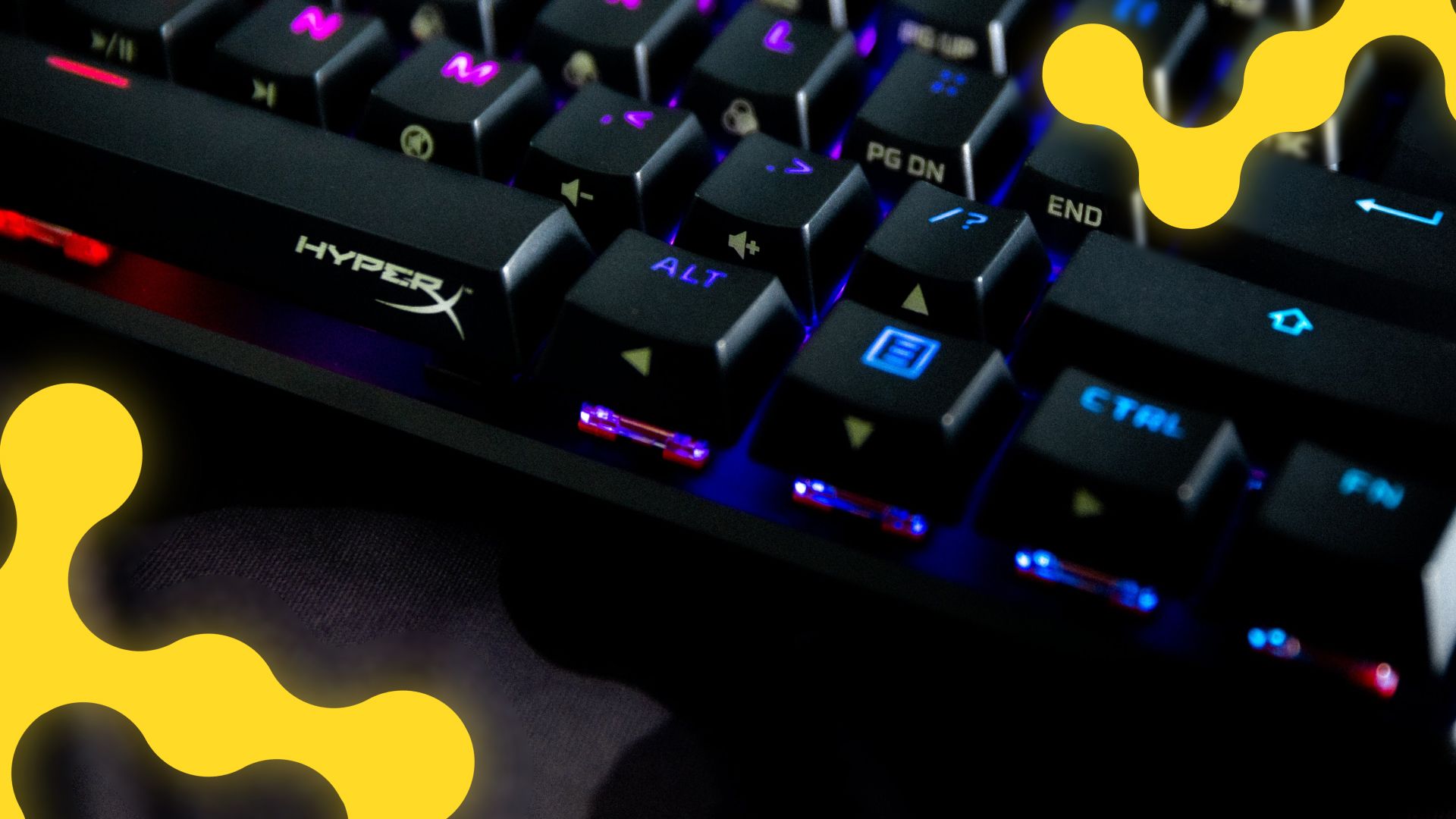