Okay, you know it and I know it too, the Vandal and Phantom come down to preference, debate done. Wait, wait, wait… before you go, just think to yourself, what makes them equal when their stats are so different, and are they really equal in all situations? That question requires some deep diving and professional opinion. While I can give some input given that I use both in high ELO (Immortal 3), input from a professional would really be invaluable, so I talked to Dignitas player Rain for her opinion.

You know I feel like that’s really hard because I will be in the freeze time going back and forth. I feel like both of them are very good weapons.

The Vandal, every aim god’s dream weapon. Compared to the Phantom, it overall does more damage per bullet but with a slower and more sporadic spray. Due to the sporadic spray and slower fire rate, it is a very high-risk high-reward weapon, and the ideal way to use this gun is to avoid spraying down enemies and going for headshots only, but warning, if you miss your first few shots, you’re probably already dead.

Here is a graphic displaying the basic stats of the rifle and how many shots it takes to kill in each body part. 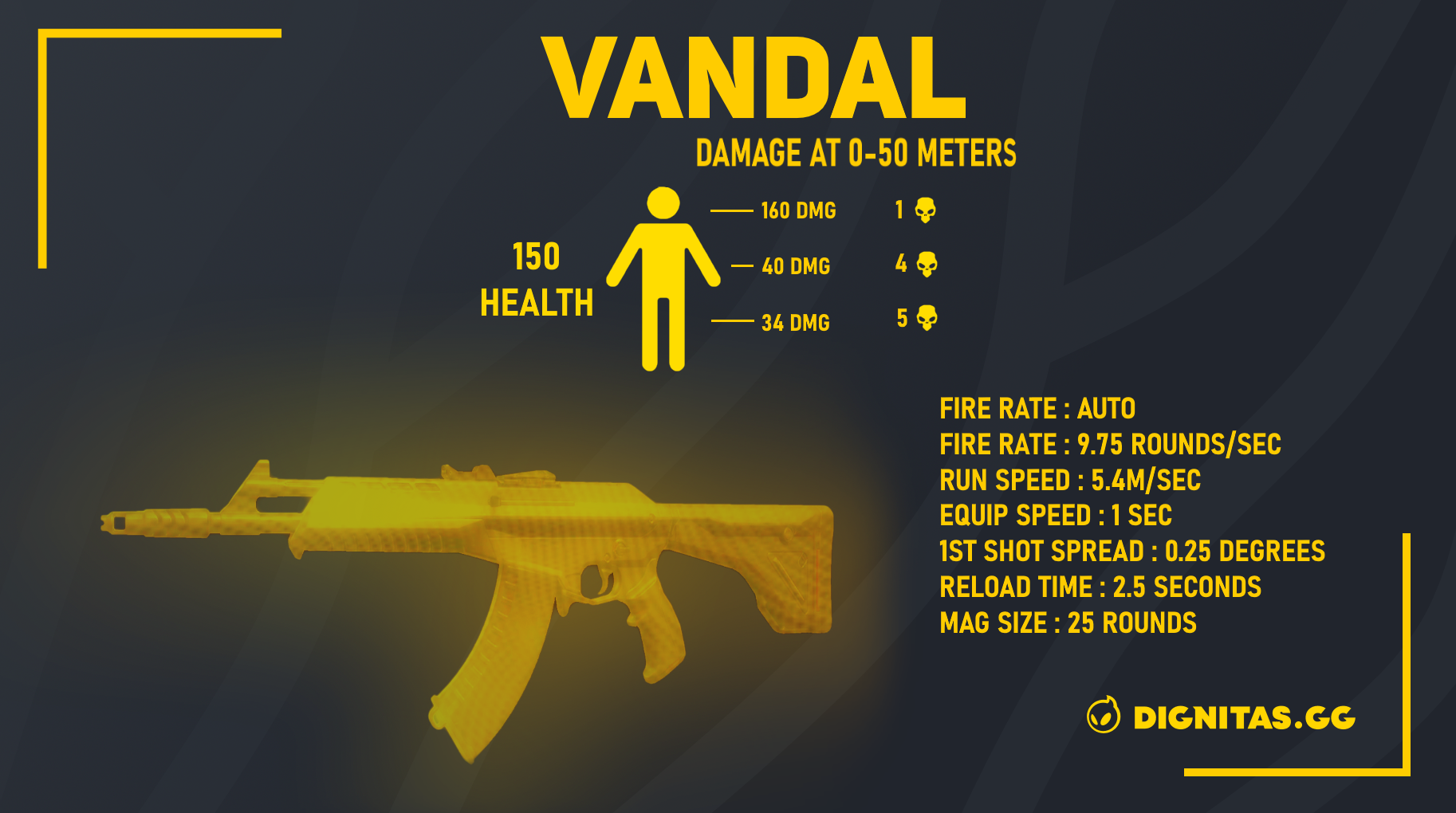 The upsides of using the Vandal are as follows:

Faster time to kill: The Phantom requires 2 bullets to kill rather than 1 at anywhere past 15 meters, it takes time to shoot both, while with the Vandal it is instant if you get a one-tap. Due to this, players who play Reyna might prefer this rifle for holding aggressive angles and want to dismiss immediately after their kill.

No damage drop-off: Unlike the Phantom, the Vandal does the same damage regardless of how far the enemy is away from you, so taking ranged battles is a lot more consistent and requires fewer bullets than the Phantom, which would require even more bullets at long range than up close. This makes the Vandal better for long-range maps like Icebox and Breeze.

I’d definitely be more comfortable buying the Vandal for long-range maps like Icebox, or Breeze, or perhaps Ascent mid too just because of its range and one-shot headshot rather than doing 140 with a Phantom, that’s always a little sad.

One-shot headshot: This one is pretty obvious but still important to mention, if you get a headshot with the Phantom from any range beyond 15 meters, you’ll need to hit another shot to get your kill, but with the Vandal, it will do 160 damage regardless of range.

The downsides of using the Vandal are as follows:

Bullet tracers visible through smokes: Unlike the Phantom, you can see where your enemies are shooting from due to the bullet tracers and can shoot them through smokes with a decent amount of accuracy. This is especially bad in higher ELO where you will most likely get punished and killed for this. Due to this, I do not recommend using the Vandal if you are on a character who uses smokes as you will not be able to spam through them as effectively. 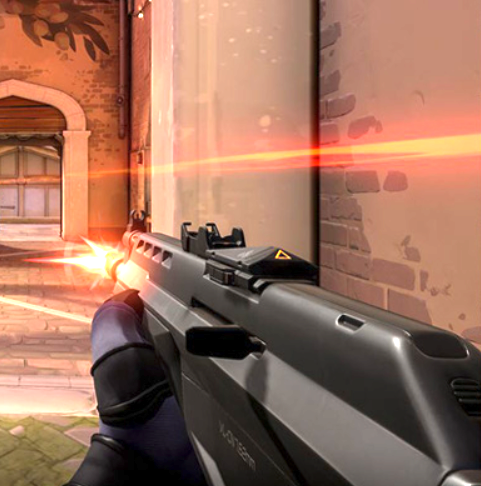 Phantom has objectively better stats at close range: In every metric, the phantom is better when under 15 meters, so for maps or positions where enemies will usually be within that range, the Phantom is the better pick.

BONUS: The Prime and Reaver are Rain’s picks for the best Vandal skins!

The Phantom is almost the antithesis of the Vandal, low risk but medium reward. It allows you to take those long-range fights less effectively than the Vandal but allows you to spray enemies. The gun is also silenced so it will not be heard from long distances, and you will not be able to see bullet tracers through smokes. Overall it has lower fragging potential than the Vandal but is a lot safer and more reliable. 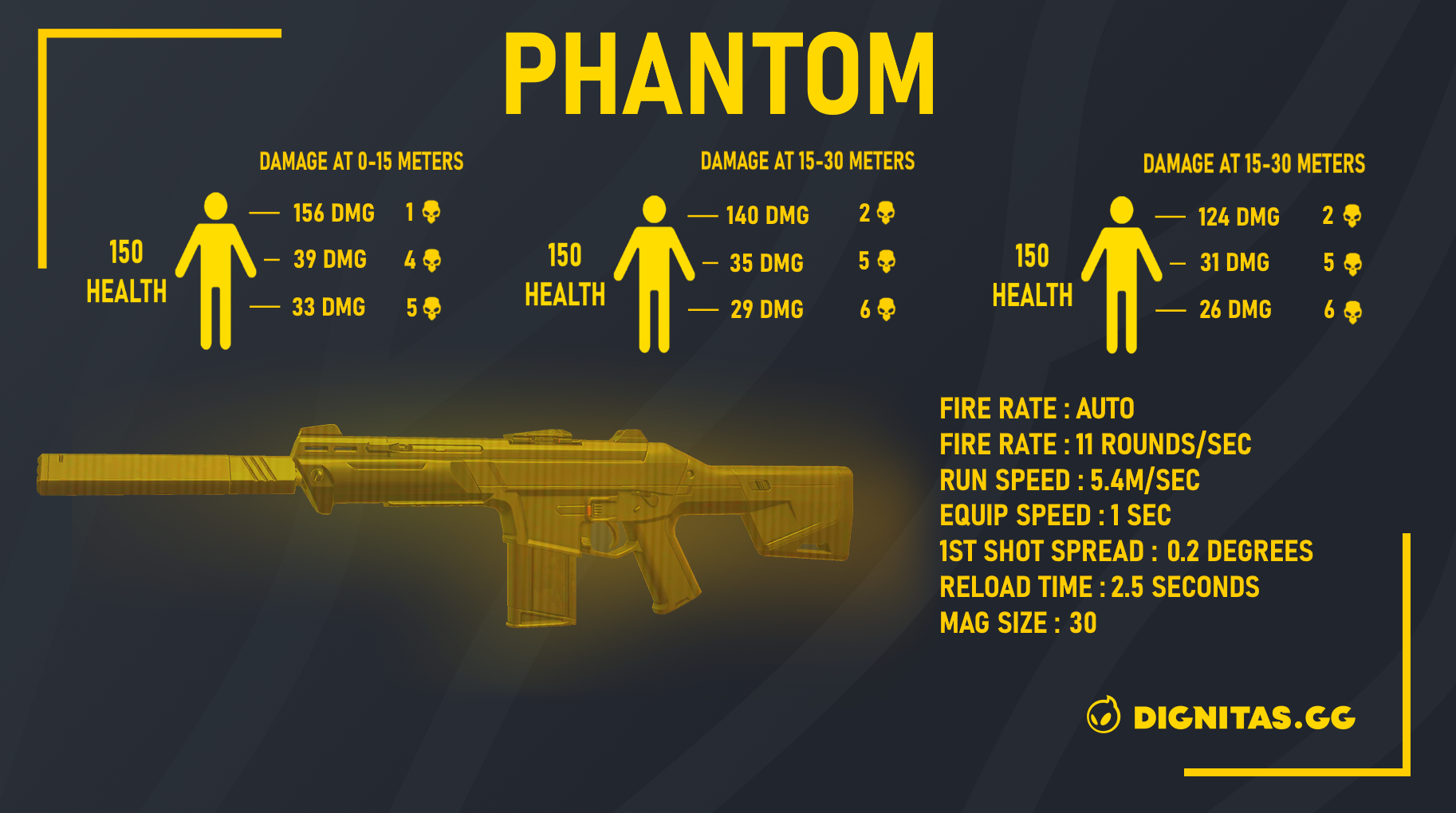 The upsides of using the Phantom are as follows:

Bullet tracers not visible through smokes: Unlike the Vandal, you can’t see where your enemies are shooting from due to the bullet tracers and can’t shoot them through smokes. Due to this, I recommend using the Phantom if you are on a character who uses smokes as you can spam through smokes safely and with the faster fire rate and more ammo, you are more likely to hit someone.

Better for spraying down enemies: Due to the Vandal’s lower fire rate and accuracy, spraying down enemies can be a risk and will most likely result in you dying before you can get a kill, and this usually results in you being killed if overwhelmed by multiple enemies. With the Phantom, however, you have a faster fire rate and magazine size, so you can easily take on multiple enemies much safer and with ease.

Better for Reyna’s ultimate: Due to Reyna’s increased fire rate in her Empress form, people often find it hard to control the Vandal and will lean towards using the Phantom.

Better for close range than the Vandal: For this reason, close range maps like Bind, Fracture and Split are great maps to use the Phantom on.

Silenced: While this one is not as important as the others, having a silenced weapon can be great for lurks.

I would say if you’re going to play Cypher, or Omen or Astra, agents where you’re going to be lurking around in smokes, using the Phantom would definitely be an advantage, because they are not able to see you with tracers and it is a little less loud.

The downsides of using the Phantom are as follows:

Damage drop-off: Unlike the Vandal, the Phantom does less damage the further away you hit an enemy. Due to this, taking ranged battles can be risky compared to the Vandal.

Slower time to kill: At any range longer than 15 meters, the Phantom requires multiple shots to kill, meaning it is not instant like the Vandal if you get a headshot, meaning, you can potentially get killed by someone if they have a Vandal in between the short time you start shooting with the Phantom and finishing the job. This is especially bad for Reyna due to the need to dismiss after getting a kill and could enable the enemy team to trade your kill.

BONUS!: The Oni is Rain’s pick for the best Phantom skin!

Overall, while each gun has its own advantages and disadvantages, they are minor, and really it is up to preference, while you probably already knew that, hopefully, we gave you some insight on which one might best fit your playstyle and which one to avoid.

We here at Dignitas wish you good luck in your next games and hope you enjoyed this short and sweet guide! 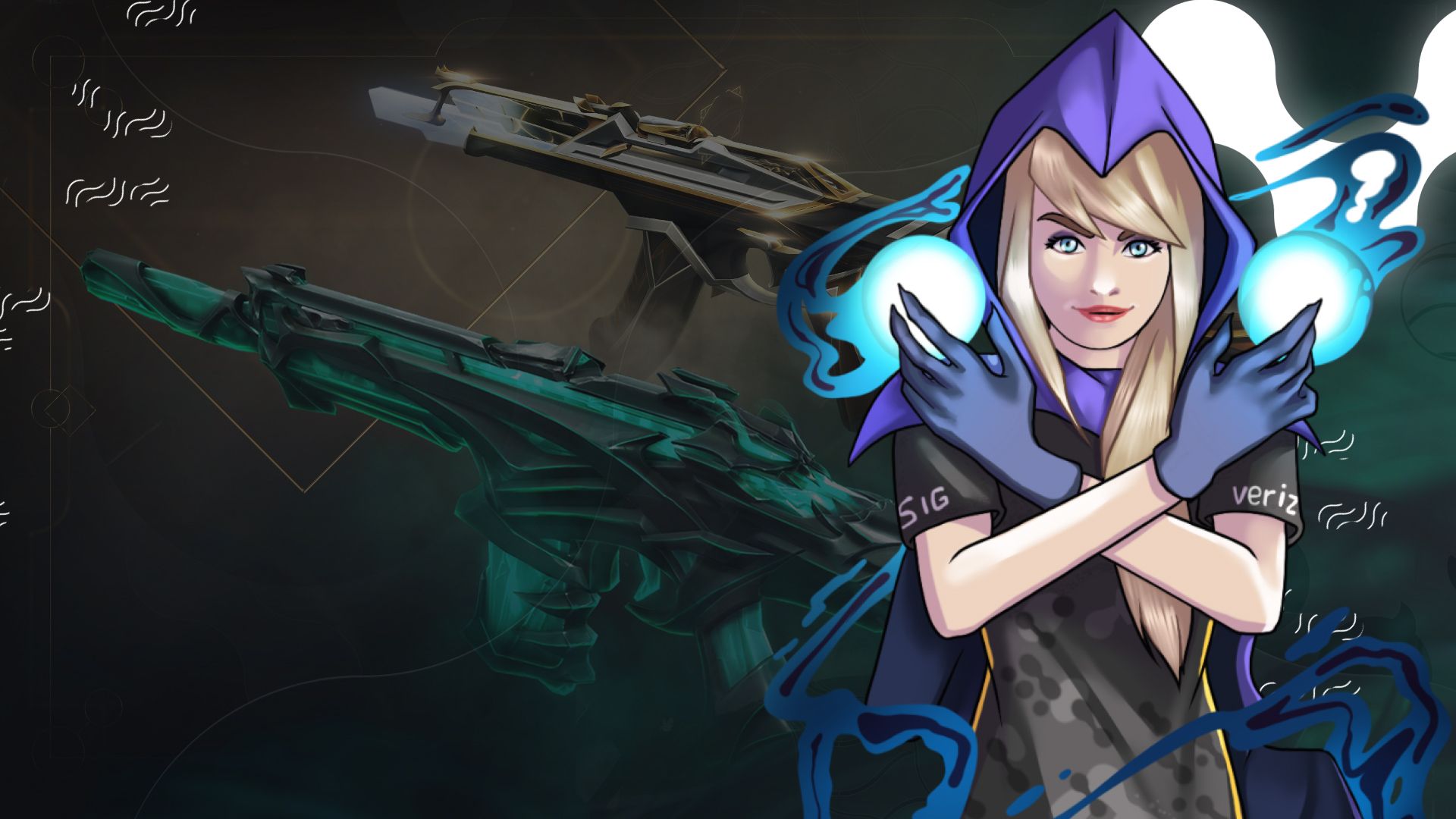