What Exactly Is Crosshair Placement?

One of the most straightforward explanations for excellent crosshair placement is to avoid having your crosshair float about your screen while walking across the map. Every step you take should be planned around the possibility of an opponent peeking around the corner. When traveling the map, search for a corner, an angle, or a known hiding spot. When you aim your crosshairs precisely, you have a good chance of landing a clean pick or frag on someone the minute they appear on your screen.

Learning to aim at head height is a must-have ability and technique in Valorant if you want to advance substantially. It will improve the precision and accuracy of your flicks, and you will witness a lot more one-tap headshots when playing. When you aim your crosshair at head level, you'll be able to control recoil better, allowing you to bring your gun straight down. Good crosshair placement is similar to having good game sense; players should be aware of what is going on in front of them and around them at all times. 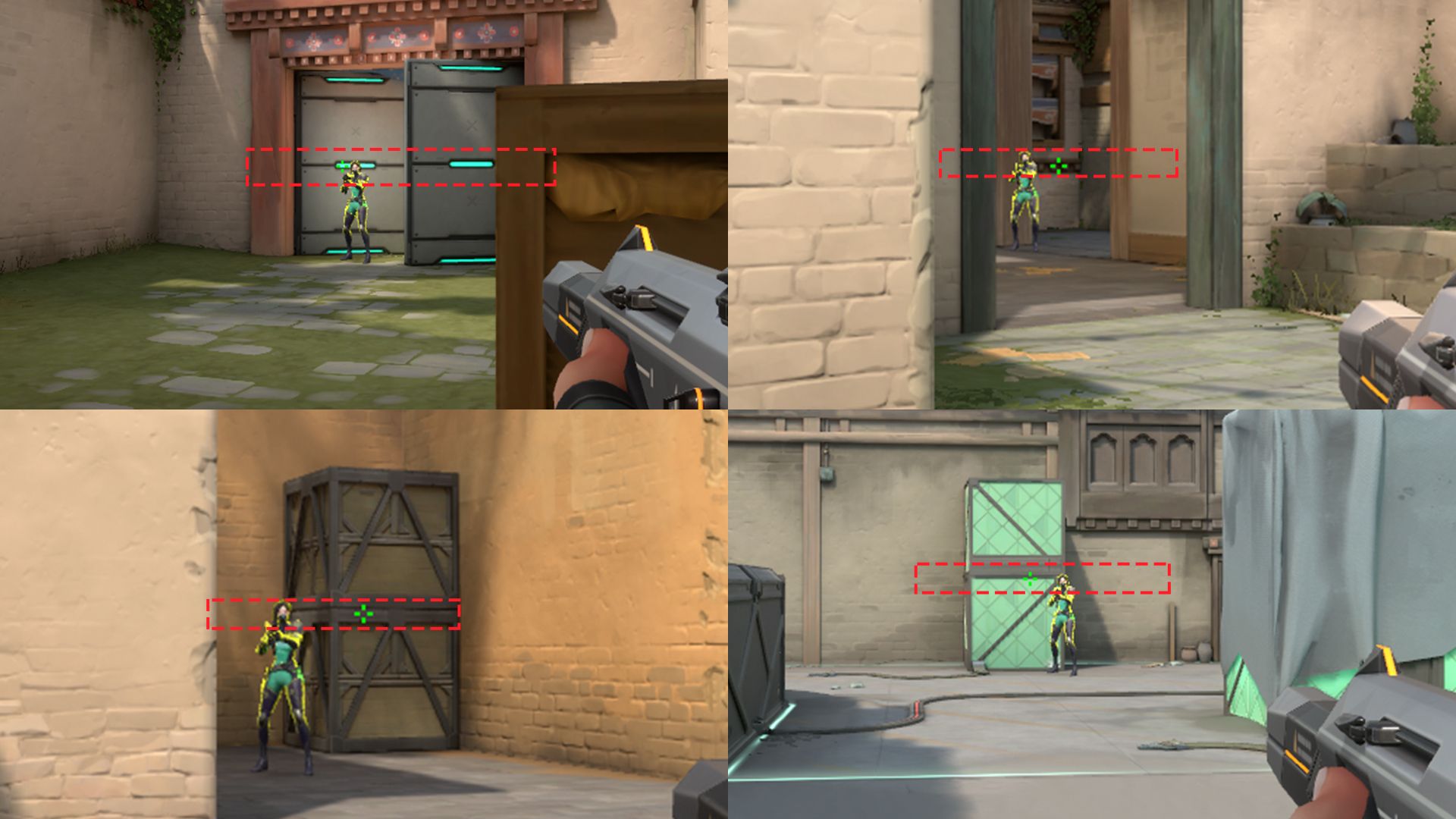 To practice this strategy, players can travel to Valorant's firing range and put-up bots with armor to make the simulation as realistic as possible. Then, for this aiming drill, activate the bots on any difficulty level. On the other hand, hard mode is the optimum difficulty for players who want to force themselves to keep their crosshair level at high speed. The drill is a fun way to work on hand-eye coordination. While aiming at head level is a difficult skill to master at first, you should intentionally force yourself to do so to improve your hand's motor skills when aiming with your mouse. Following the practice range with bots, players should use the game mode deathmatch to exercise and force them to move about.

Learning how to pre-aim angles is the next level, best depicted when the player is on defense. Players can set their crosshair behind a wall and pre-aim it towards a specific spot when the round begins and the barrier falls. On the other hand, enemies can broadly peek those angles and catch the defense off guard; thus, players should allow them some wiggle room. Their safety and distance are critical when they expose their location and body to the enemy.

When peeking from a distance and not in a position to be readily murdered or used by an enemy, safety takes precedence. The angles from which you should pre-aim should be from regions where the enemy would most likely be swinging. Placing your crosshair on an approximate location where you expect the opponent to emerge is simple to define technique. You might find yourself getting more kills once the skill becomes second nature. 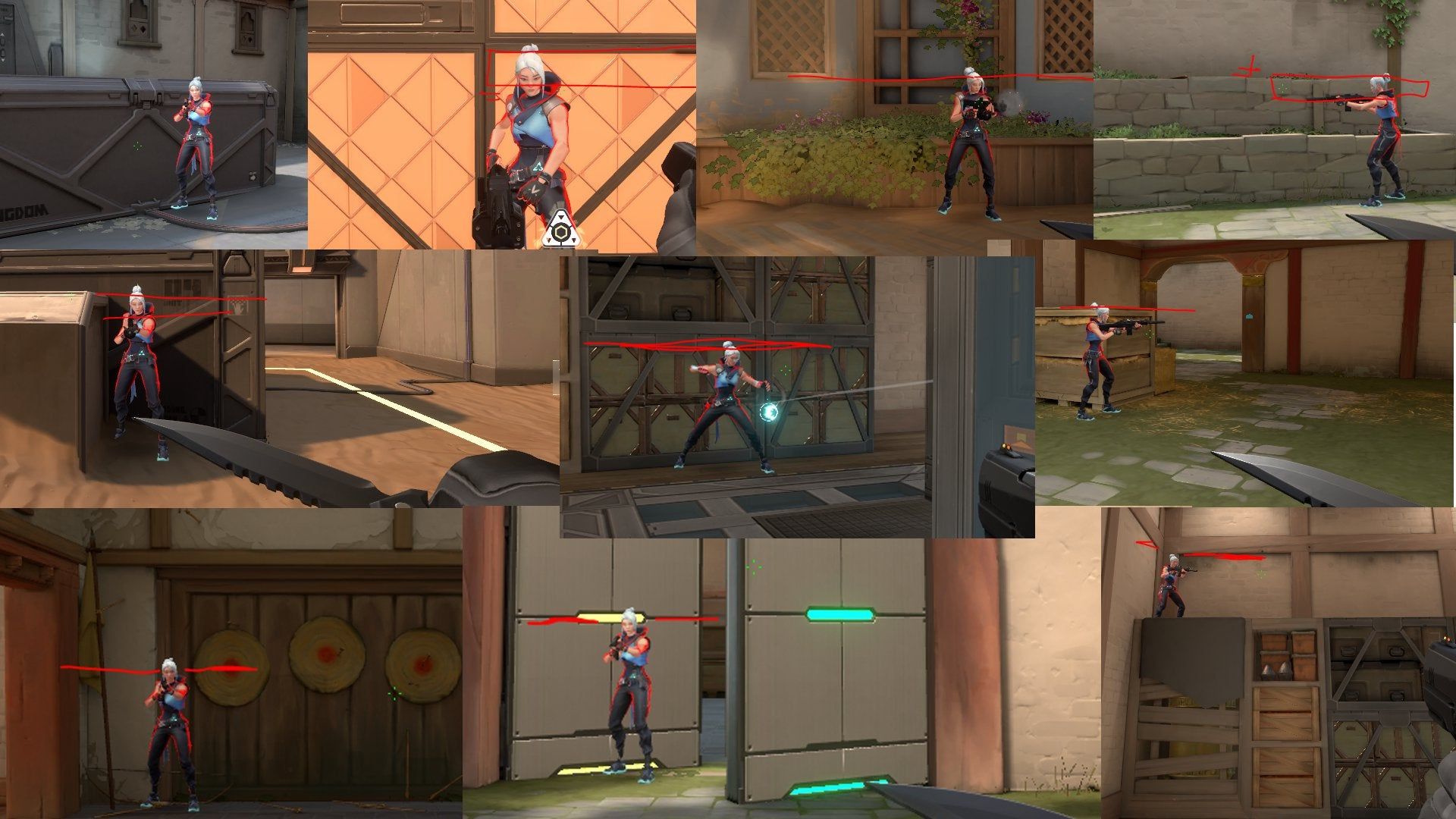 The next stage in learning about crosshair placement is to add pre-firing to pre-aiming. Pre-firing is a term that many people have heard of and have a basic understanding of. Pre-firing may be a function such as a wall bashing in other games such as Call of Duty, Battlefield, or Rainbow Six Siege. While there aren't many surfaces to shoot through in Valorant, the general principle of wall-banging still applies. Understanding that the enemy would most likely be standing in a position when the round begins is an example. The player will actively pre-aim the angle before firing pre-fire rounds, resulting in a clean kill.

It is a helpful talent to land kills in regions where you know there is a 50% chance that an enemy will be present. The more you learn about the maps, the more you'll see standard angles that players take or cheeky spots where people like to hide. When approaching these places, players should train themselves to be prepared and pre-fire the angle as they get closer.

Isolate Your Angles and Control Your Exposure 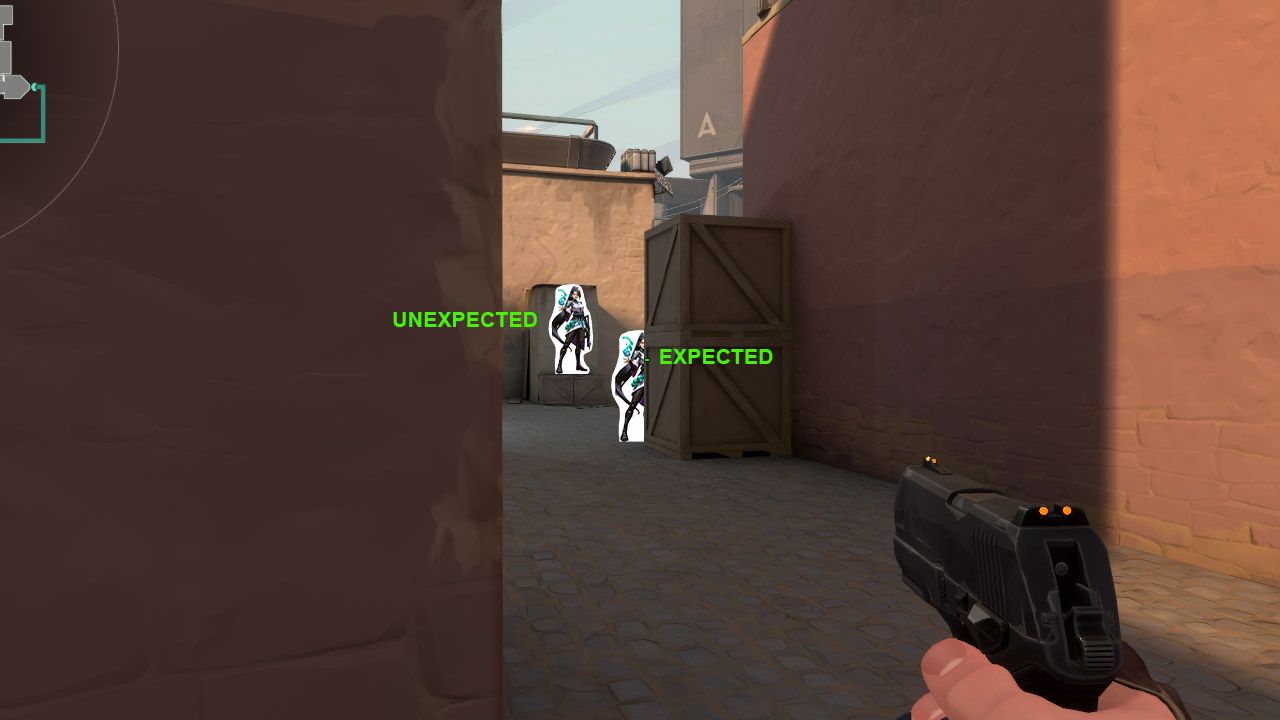 Finally, players should understand how to control their vulnerability to opponent engagements by isolating their perspectives. The strategy entails map location and reducing your exposure to angles from which possible opponents could fire at you. Applying this in the game involves avoiding as much exposure to open regions of the map as possible. The purpose of isolation is to keep your interactions one-on-one. It's crucial in Valorant to avoid fighting numerous individuals at once or by yourself. When players gain confidence in their ability to restrict their exposure while walking over the map, they will be more willing to engage in one-on-one gunfights with people who will be at a disadvantage.

Because it is a skill gained through time, the way players position themselves before entering combat will require ongoing practice. Actively looking for a cover that can position yourself between you and your attacker is helpful to practice. You'll be able to set up engagements with absolute certainty if you learn to do this subconsciously over time. The fundamental purpose of limiting your exposure is to give attackers as few opportunities to observe you as possible. The less information the opposition has on your position, the better; a stealth mission is preferable, whether lurking or front line.

The final suggestion is to get as much utility out of the agent you're utilizing as possible. The skills can assist you in manipulating lines of sight around the map, giving you the best opportunity of minimizing certain angles. Agents with smoke utility are good examples of blocking adversaries' line of sight swiftly and effectively. Still, you'll also be able to maneuver in, out, or around your smokes to isolate yourself. As you engage your foes from obscure angles, you can catch them off guard. You'll be significantly less likely to be swung on by an enemy if you learn how to use your utility effectively.

Never stay in one spot for too long, and always move after a successful kill. It is in your best interest to shift from the angle you are holding and reposition soon after winning an engagement. Doing so may jeopardize the enemy player's call out to their teammates, causing foes to attack you as they hunt you down. The repositioning will also save you from being peeked at by an enemy looking to avenge or exchange for a close buddy. 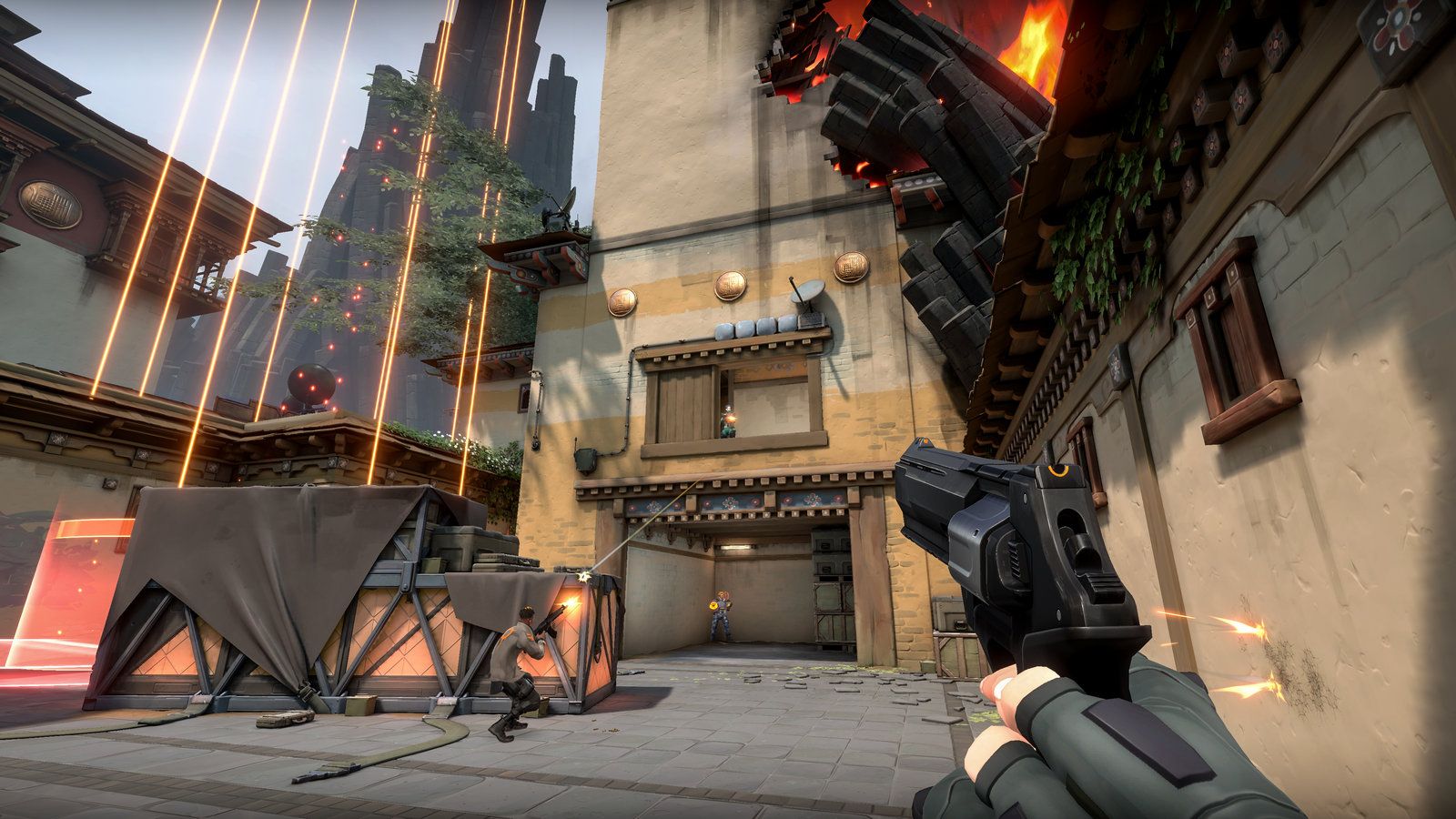 Simply put, the best way to improve your crosshair placement is to play the game more frequently. With enough practice, it will become second nature. The in-game experience allows users to form a subconscious habit. While there may be other aspects to consider, such as the display of a crosshair, mouse sensitivity, or map awareness, these are just the beginning. Your crosshair placement will improve slowly, and you will be able to use it to your benefit and the enemy's disadvantage. 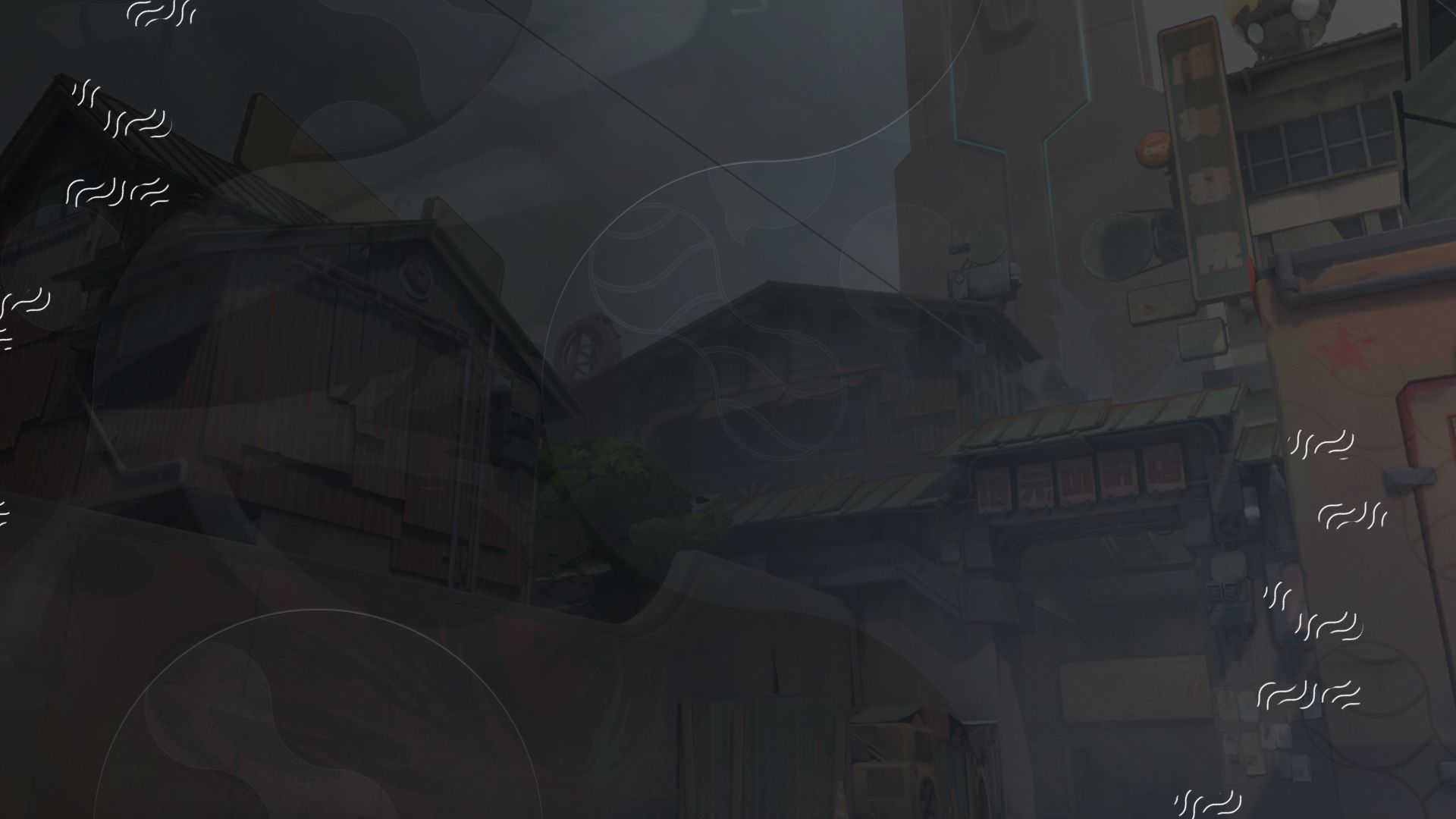