An Easter Egg is something that is hidden to the common eye. It can contain either a hidden message or an inside joke that exists purely for the entertainment. Easter Eggs are usually very hard to find but can even be right under your nose without you knowing it. An Easter Egg could certainly provide a little grin if it gets found. In this article I will show you some of the most interesting, funniest and coolest Easter Eggs in CS:GO. Let's take a look!

Dust 2 is no doubt the most popular and played map in CS history, therefore it is bound to have a few Easter Eggs. Take a look behind the A Site and you will find the area that is called Goose and that is because on the wall there is a graffiti that spell out "Goose". This refers to Minh "Gooseman" Le that together with Jess Cliffe co-created the popular Half-Life mod Counter-Strike in 1999. Together they started game series that has sold millions and millions of copies all around the world.

Minh Le and the graffiti.

On the map Overpass, there is a graffiti on the wall towards B Site from T Spawn that spell out oneup. This is a reference to a German famous graffiti crew called "1UP Crew" or "OneUnitedPower" that has sprayed graffiti a lot in public places all over the world and they have even made quite a few videos showing their vandalism. Something to note as well is that the map Overpass is actually based on a canal overpass set in Berlin, Germany which makes the Easter Egg even more interesting.

Both the maps Dust and Dust 2 has a few writings on the walls of what appears to be Persian and has some various meanings. On the map Dust for example there is that writing on a wall close to A Site that means "CS Source is fun". Dust 2 has a writing on a wall towards B Site from T Spawn that means "Fragtastic". If you take a look at T Spawn on Dust 2, you will notice that there is a Persian writing on the wall towards mid that translates to "Freeman was here". This is a reference towards the popular main protagonist of the Half-Life Series Dr. Gordon Freeman.

LDLC vs Fnatic in the DreamHack Winter 2014 Quarter-Finals were looking like a good match, LDLC dominated the first half and ended the half strong in a 12 - 3 lead. LDLC also manage to win the second pistol round and the match looked to be over but then Fnatic turns it around. An illegal boost comes from Fnatic which gives them an unfair advantage due to a texture transparency that lets Fnatic see through a wall. The result of this is that Fnatic manages to make a perfect comeback from 13 - 3 to 13 - 16. Immediately, the community said that Fnatic shouldn't have won and long discussions were made. The final decision was to replay the match from LDLC's 12 - 3 lead but Fnatic forfeited and LDLC went on to the semi-finals. The boost position on Overpass was quickly patched after and a sign was added on the wall saying "Geländer übersteigen verboten" which is German for "Climbing over railings is prohibited". This sign is now on the wall as a reminder of the event.

During overtime of the first map in The Grand Final of ESL Cologne 2015, Fnatic decided to buy 4 awps and together they peaked mid doors. The unsuspecting victim apEX from the opponent team EnVyUs decided to peak from the other side of the mid doors but was greeted with the firing squad and were killed instantly. The Fnatic members then equipped back their rifles and this could very well have been a deciding factor in the match that ultimately led to Fnatic's victory. To remember this brilliant strategy, a graffiti showing a terrorist holding 4 awps was added in T Spawn.

With the score being 14 - 14 between Fnatic and Team Dignitas in ESL Cologne 2014 Semi-Finals it was a very close and exciting game. The bomb was eventually planted in the round and olofmeister from Fnatic decided to jump onto the diffuse soon after it was planted and held the defuse even though a molotov came towards the bomb to prevent it from being diffused. olofmeister managed to defuse the bomb but were killed the second after from the molotov. This didn't matter especially much however as Fnatic went on to win and move on to The Grand Final. To honour olofmeister's bravery, a piece of art were added on the wall close to B site on Overpass.

The art of olofmeister.

Easter Eggs can be hidden among us whether we see it or not. Even tough it may be a very small addition, it can be good with a few Easter Eggs that just waits to be found. Keep your eyes open and you'll never know what you'll find. 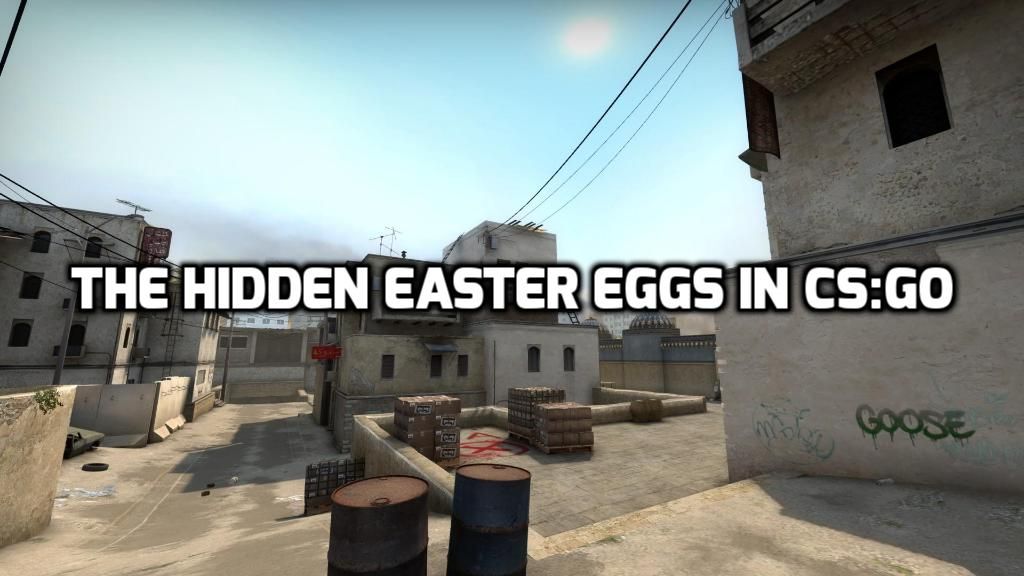