Mercenary camps are akin to side quests in RPG and adventure games. They're often overlooked and overshadowed by the bigger objectives found on HotS maps. Even if they are picked up, it's usually an afterthought and not part of a greater strategy. Yet mercenary camps can be a powerful tool when captured at the right times. Similar to side quests, if you complete them when it's opportune, the rewards you get can be used to make your struggles effortless.

Not just Boss Camps, but the Mercenary camps too!

Boss camps are the big daddies of mercenaries. They give you a meaningful reason to group with your team and push down the same lane as the boss. Pushing as five with a boss at your side forces your opponent to react to the push, giving your team an opportunity to capitalize on a wide variety of mistakes players can make. Which is why so many players value the boss and create strategies around them. It's an impactful unit that flaunts its usefulness in a push and forces the enemy to gravitate to the boss' lane of attack.

When it comes to siege and bruiser camps however, players tend to pick them up whenever because there's nothing better to do. That's fine - to an extent - but I'm sure we've all had that game where a pair of siege ogres go unattended for a few minutes and take out a fort on their own. We've also seen our fair share of sappers, bruisers, and siege be nothing more than an extra source of experience fodder for your opponents. How did one get more value than the other? Was it just being outmatched in the team composition?

Well it comes down to the timing of the capture of these minions. Mercenary camps aren't worth much experience at all. You're better off sitting in a lane and soaking a wave of minions than clearing a camp if that's the case. So hold off on grabbing a siege or bruiser camp until one of the bigger objectives are available. The potency of a mercenary camp comes down to its timing.

Too often in games do I see an executed team push with an objective such as the Infernals (Infernal Shrines), Immortals (Battlefield of Eternity), or Curse (Cursed Hollow) end in the pushing team retreating and grabbing camps. This is a terrible mistake.

If your team has just pushed with an objective it's likely that your lanes are going to be pushed onto their side of the field. At this point your team is grabbing camps that aren't going to do anything. Both siege and mercenary camps are good for pushing lanes, so hold off on clearing the camp until the waves level out a bit. It's perfectly okay to retreat from a push and simply recall to the Hall of Storms. This allows time for the lanes to reset back to normal.

Ideally you should be clearing mercenary camps just before an objective spawn. This will force the enemy on their heels and make decisions. Decisions are the key to any MOBA and the more you give your opponent to make, the greater chance they make a mistake.

Siege and bruiser camps aren't as flashy as bosses and objectives but they can get the job done with proper setup. Try to think about what this camp is going to do if you take it. Are you taking it while they have four enemies already in the lane? Is that really going to accomplish anything or can you wait until they leave the lane to capture it.

Even though Heroes of the Storm prides itself on the constant team battle action, the small decisions still add up to major victories. Tiny macro decisions like when to take the mercenary camps in HotS can play a big part to winning the game.

Learning some of the finer nuances can help elevate your game to the next level. Try paying attention in your next few games to when you can optimize taking mercenary camps and you might notice the opposing team coming apart at the seams. 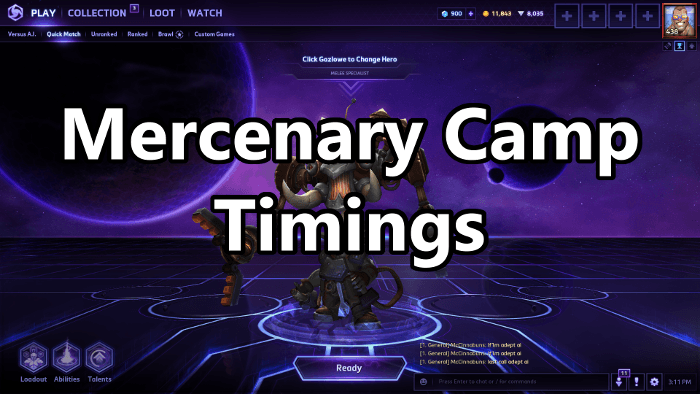