What’s the fastest way to climb? Every player that has ever been placed in bronze has looked to the internet to have this question answered. While there is a lot of advice out there on how to ELO climb one of the most common answers goes something like “pick a champ and just one-trick with that champ.” So let’s explore the pros and cons of one-tricking.

One-trick is a term used to describe players that only play one champion. The most famous players/streamers who do this are people like box box who one-tricks Riven, Tobias Fate who one-tricks Gangplank, or Tyler1 who one-tricks Draven. All of these players at one time or another have been in or are currently in Challenger having only played their one champion. Most of the time, too they are the ones who make insane plays that make us all say, “I just wish I was that good!”

Why is one-tricking so appealing?

Well one of the biggest problems with bronze level players is their mechanics. Most of the time, bronze players have very low mechanical skill. However, when you spend all of your time devoted to a single champion, your mechanics on that champion soar. Even if you don’t take the time to really dig in-depth and try to dissect your gameplay and what you could be doing better or how you should have done that, your mechanics will improve. You become so intimate with that one champion that you learn the timing and the damage and the limits. In fact, you become so intimate with the limits that you begin to push them and do things most people wouldn’t be able to do, even in bronze.

Matchups also become a thing of the past. When you spend your time one-tricking, you eventually play enough games to get almost all conceivable (or at least reasonable) matchups you can get. Play enough games and you learn how to play against any matchup. It comes with knowing limitations and you just naturally learn how to turn your weaknesses into strengths.

When I was one-tricking Thresh for a while, I would always say, “there is literally no botlane matchup that I can’t win against,” and it was true. Morgana is one of the biggest counters to Thresh, so naturally in many games people would try to counterpick my Thresh with a Morgana. But I played so many of those matchups that I actually love to play against Morganas now, because they think they’re countering me, and I can play that matchup so well that I never lose to a Morgana player.

We’ve all seen those games where one player takes their entire team on their back and drags them through the game, ultimately winning because of his/her efforts. A lot of the time, unless that player is smurfing, it is because that player one-tricks that champion. They just know everything there is to know. The best runes/masteries, the right builds, the right plays to look for and it's because of the intimate knowledge they’ve accrued after playing a ridiculous amount of games with a single champion.

This combination of mechanics and dominance in most matchups will spark quite the climb in ranked games. You'll find yourself winning many games and getting higher and higher. In fact, I would agree that one-tricking is in fact the fastest way to climb the Elo ladder.

That all sounds great! So what’s the problem with one-tricking?

So, what happens when your one champion gets banned? The most likely answer is you probably play someone you don’t know and you feed pretty hard. This can happen pretty often to one-tricks. Usually a champion worth one-tricking is also a champion worth banning. So they are forced to pick someone else. Herein lies the true problem with one-tricks: you’re not actually that good at the game as a whole.

Now before I go on, let me clarify that I am not claiming that famous one tricks like, Tyler1, box box, Pink Ward, Yassuo, Tobias Fate, etc. aren’t good at League of Legends. They're Challenger level players, obviously they're good. What I am saying is that ultimately their scope is limited. There’s a reason you don’t see one-tricks playing professional League of Legends, and that’s because to truly be the best, you need more than one champ. If you watch any famous one-trick talk about the game, you can tell that they have exceptional game knowledge and know how League works. But watch them play any champion outside of their one (or two) champion pool.

Now if we bring it back to lower Elo one-tricks. They do not have exceptional game knowledge. All you have to do is ban their champ and what you have left is someone that's going to feed. The best way to truly get exceptional at the game is to play every champ and every role. Becoming really intimate with the entire game, not one microscopic aspect. When you limit your scope, you limit your potential.

Another big flaw lower Elo one-tricks tend to have is their tunnel vision. They become so focused on playing well, having good KDA and good farm and outplaying as many people as possible that they forget to really focus on what wins games - teamwork and objectives. I’ve seen it hundreds of times, a one-trick follows the enemy team in their jungle and dies, but not before getting a triple kill and then types in all-chat, “worth.” That’s cool, that’s a nice highlight reel play, except if you had been with the team we could have had the damage to get Baron and ultimately take towers that could have won us the game. While at the end of the game you can gloat all you want about your high damage output and your massive amount of kills, ultimately you’re not playing League of Legends, you’re playing team deathmatch.

So what’s the answer?

Well, unfortunately, I cannot answer this question for you, because the answer depends on what you want to get out of this game. If you want to become the best Draven/Gangplank/Riven/Yasuo/Zed player out there and want the fastest way to raise up your rank, then by all means one-trick. But if you really want to get good at the game and are willing to put in the extra hours it takes to play the massive amounts of games it takes to truly play well, then you’re better off avoiding one-tricking. Keep in mind, that either of these paths is fine to take.

Always remember that League of Legends is a video game, designed for users to have fun. So if you’re having fun doing whatever, then that’s fine. I think too often we forget that this is supposed to be something we do that we enjoy. Trust me, there’s enough things that will tilt you in the League of Legends community, don’t let your own gameplay be one of them. Pick what you want to do and don’t look back.

Picking a champion to one-trick?

Really quickly, I want to touch on picking a one-trick champion, because there’s a few schools of thought. One is to pick a champ that is really strong, in the meta, a high skill cap, and has a lot of outplay potential. Another school of thought is to just pick someone who’s simple, not a high skill cap, but still strong. I think the best method of picking a one-trick champ, however, is just picking someone that you like.

Yes, there are champions who are not strong, who won’t really carry games, and who are just bad in the meta right now. However, like I’ve said before if you are a one-trick, you are able to surmount those obstacles with the experience you put in on that champion. So a lot of the shortcomings of any champion become much more forgiving when your skill on that champion is high.

Also, if you’re going to be playing an unspeakable amount of games on someone, it might as well be someone you enjoy playing, or you can carry with, or even you just find cool. That’s how I one-tricked Thresh. I was learning to play support and I saw one montage video on MadLife and I lost my mind. I thought, “Thresh is the coolest champion in the game. I just want to be the best Thresh player in the world.” Even though I couldn’t really hard carry games, I loved just being the best Thresh player around. The only reason I stopped is because I wanted something else out of my gameplay, so I changed.

So, if you want to play Jhin just because you think his Blood Moon skin is awesome, DO IT. Go for it! What could it hurt?

I want to leave you with one final thought, and that is nothing has to be permanent. Pick a champ you like to play and, if somewhere down the road you don’t like it, then do something else. There’s nothing that says that this decision will force you down a life path that you can’t come back from. If you decide one day to one-trick Yasuo and then decide you hate playing him, that’s fine. The great part about League of Legends is that the game is always changing. So with the ebbs and flows of Summoner’s Rift, why not change with it? Don’t let anyone but yourself decide how you want to play this game. Do what makes you happy, and leave it at that. One-trick or not, that is the best advice you can take away. 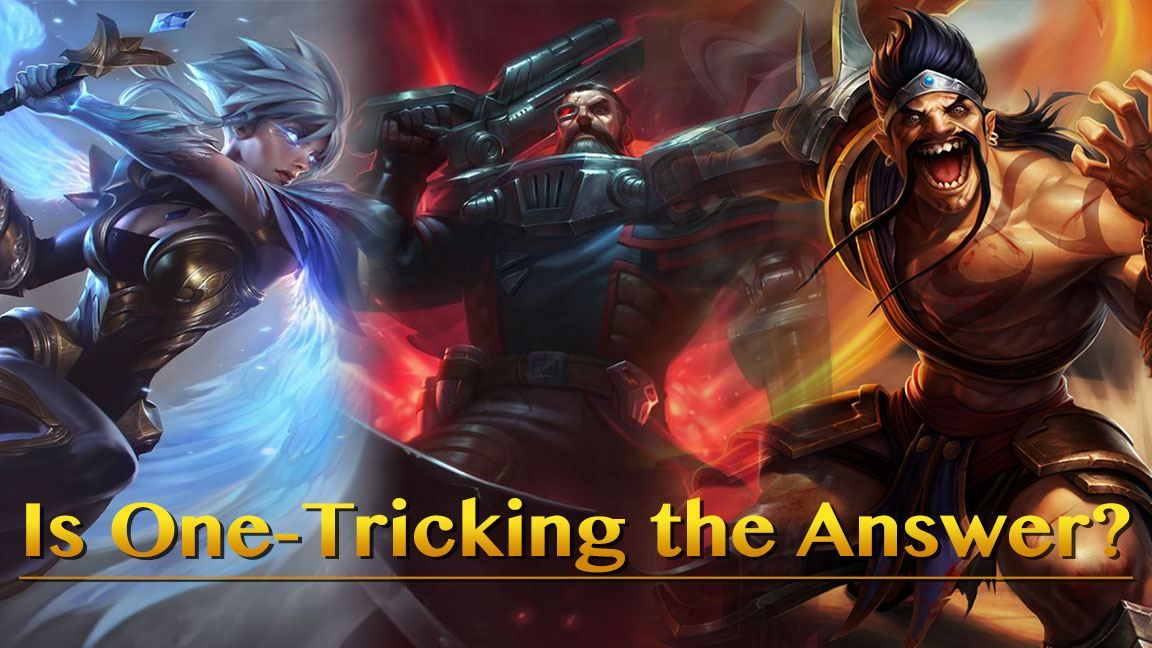