Introduction
Within the Counter-Strike community, Operations are like a gift from above. But what are Operations? If you are new to the community or would just like some more information. Let me show you the wonderful world of Operations.

Counter-Strike Operations are a sort of DLC for the game. The Operations have brought many different things into the game, such as skins, maps and a silly storyline. With the DLC the player also receives a 'Coin' into their CSGO inventory, this coin shows that you have purchased the Operation and have played in it. The coin comes in the standard and boring bronze looking colour, but you can upgrade it to the middle silver and the completed gold tint. There are different things that come with upgrading this coin and this was introduced with the first operation, which we will review now.

Operation Payback
The first Operation was introduced on April 25th 2013. The Operation was titled 'Payback'. For a measly $5.99/£3.99/€5.19 you would receive everything that the operation has to hold, but this Operation was the most bare bones Operation that Valve released and it featured only Maps. If the pass was purchased, players were delightfully surprised to see a coin on their profile. Bear in mind this was before the 'Arms Deal' update to CSGO, so inventories were non-existent back then. With this coin the tiers would be upgraded through simply playing the maps that the operation provided. After 10 hours the coin would reach a silver colour and then after 50 hours, gold would be achieved giving it a nice shiny look on the player's profile. Because this operation was introduced before the competitive update was released, players had to complete their hours on 'Classic Casual' game mode which is now simply known as 'Casual.' 7 maps were introduced with this Operation, 4 hostage maps and 3 bomb defusal maps.

As previously stated this Operation was introduced before the 'Arms Deal' update, so no skins were included with this operation. Surprisingly enough though, this operation raised $150,000 all of which went to the community map creators that featured in this Operation. After 4 months of fun and interesting maps, the Operation disintegrated on August 31st 2013. Before the Operation was taken from the community, the Arms Deal update was introduced on August the 13th which introduced weapon skins, the M4A1-S and the USP-S

Operation Bravo
Quickly enough, the second Operation was released. Operation 'Bravo' launched on September 19th 2013. The same price as 'Payback', very affordable for how big this Operation was compared to the first. Since the 'Arms Deal' update was released before 'Bravo', this Operation featured some new and juicy features not previously seen in 'Payback'. Once again the player received a coin, but this time it was moved to their inventory and they could select to show off their coin on their 'CS:GO profile', and if they had purchased the 'Payback' coin they could choose to show either the 'Bravo' or the 'Payback' coin. This coin was different than before. Because of the previous competitive update, you now only had to play 30 hours of Operation maps but you had to win 15 competitive games on the new Operation maps to upgrade it to that almighty Gold.

Two different weapon collections were released as of this update which was the 'Alpha' and 'Bravo' collections. If the Operation was purchased, players were eligible to get the 'Alpha' collection as weapon drops from simply playing the games and all players were eligible for 'Bravo' case drops which required a key to open and unlock the skins inside. 7 maps were introduced again as part of this Operation, which players could play on Deathmatch, Casual and Competitive. After this though, another 2 maps were added to the pools, 'Cobblestone' and 'Overpass', which were later released on December 18th. 4 months after the Operation was released, Valve decided to take it down on January 20th but an outcry from the community pushed that date back to February 5th, giving them another 2 weeks to enjoy the maps.

Operation Phoenix-Vanguard
'Phoenix' was the third operation to be released and was released swiftly on February 20th. There was a twist with this Operation and that was the fact that 8 maps were introduced, all of which were from previous Operations. Valve gave the community the choice to pick what maps they favoured the most. The community was given a poll to choose their favourite 8 maps which were to be included. This Operation was the cheapest an Operation has been at only $2.99/£2.15/€2.75. The Operation followed suit with the previous though, giving you a coin and needing the same requirements as 'Bravo.' A weapon collection was introduced with this update having the same name as the Operation itself. The case was exclusive to Operation owners until the Operation ended on the 11th of June, 2014.

The returning map 'Agency' got voted back into the game.

On July 1st, 2014 Operation 'Breakout' was dropped onto the CS:GO community. A huge difference came with this Operation as missions were now available. These missions featured some set objective for the player to complete in all of the game modes. When a mission was completed players would receive a drop from a collection that the mission coincided with. With this, 3 new collections were made available to players as drops from completing their missions. The Cobblestone, Overpass and Baggage collections were made available, with the Cobblestone collection featuring the legendary 'Dragon Lore', still one of the rarest items in the game. In order to upgrade the coin with this Operation, 15 missions had to be completed to get gold. Missions were made available every week but if the player had a backlog they could complete all of the missions they had available to them.

The mythical and sought after, 'Dragon Lore'.

Operation 'Vanguard' came into play on November 11th 2014, a month after 'Breakout' ended. Missions made a comeback with this Operation but the rules had changed on how to get the gold coin. This time, instead of simply completing missions to level up, players had to get stars. The way to collect these stars was to complete missions in a sort-of 'campaign'. Players would complete missions in an order and at the end of these missions you would gain up to 3 stars. Missions went in order of difficulty with the easiest missions granting you one star and the harder ones giving you 3 at the end. After 4 stars were collected, the gold coin was acquired. Multiple campaigns were available to players, you would pay the original $5.99/£3.99/€5.19 for two campaigns and the coin then on top of that another $2.99/£2/€2.39 for one of two more campaigns. 6 maps were introduced with this operation and later on Train was re-added to the game with a fresh new look and playstyle. The Vanguard collection was also introduced in the form of a case that dropped from playing the game. 'Vanguard' followed the fashion of 'Breakout' in the way that weapons drops were achieved from completing missions.

Operation Bloodhound
Before Wildfire, Bloodhound was released on May 26th 2015. Like previous Operations, 8 maps were introduced with 2 of the most popular coming back from previous Operations. With this, a similar system to 'Vanguard' came out, players had to complete missions to level up their coin to Gold. This was a little bit harder than before though, with players having to get 14 stars to level up their coin to the highest tier. However the drop system has completely changed from the previous Operations. This time Valve introduced a level system that featured XP. A certain amount of XP was required to level up and once the player had levelled up they received a skin drop. Another new feature introduced is when players had reached level 40 they could receive a service medal that is displayable on their profile and reset them to level 1.

The 2015 service medal with the ranks behind it.

If the player had purchased the Operation they were eligible for exclusive skin drops from the new collections as well as the old. 2 new collections were added as part of this update and they were 'Gods and Monsters' as well as 'Chop Shop' which included new unique skins and another rare AWP drop known as the 'Medusa'. Two campaigns were available this time around, with them both being purchased together instead of having to pay extra. With these two new campaigns came a story to the Counter-Strike universe that players would unlock as they complete missions from the two campaigns. The XP system stayed within the game and the operation ended on October 1st making this the only Operation in 2015.

Operation Wildfire
After waiting 3 months, the community was crying out for a new Operation. Then, on February 17th 2016, Valve answered with Operation 'Wildfire'. The Operation was similarly structured as 'Bloodhound'. It features missions that continues the story of the old Operation, keeping the community on their toes figuring out what the missions mean to the Counter-Strike universe. With the missions though came a whole new map exclusive to the co-op campaign, 'Gemini'. The map is the compound of the Phoenix, the enemies in the story. With this new co-op map and story comes 2 new items that are featured solely on the new map. A medi-shot, that gives you 50HP when used, and a 'Tactical Awareness Grenade' which when thrown gives the user wallhack for a few seconds before disappearing. With the new co-op map comes 7 new Operation maps that have been selected by Valve based on Workshop votes, but they also included a big hitter in this with the return of 'Nuke', the 8th map in this Operation. Valve have given it a fresh, new feeling with new textures and different gameplay to balance out the map.

The new 'Nuke' looks better than ever

There is, of course a new coin that came with this Operation. Similar to ‘Bloodhound' you need to complete missions in order to achieve the gold coin. The way that the gold coin is achieved is by completing 14 missions in either of the two campaigns. As previously stated, 'Gemini' only features co-op missions for players to complete, but the 'Wildfire' campaign features missions that users have to complete by playing the various game modes made by Valve except for competitive. There is also a new feature that gives bonus XP called 'Blitz Missions'. These missions have the player going out into 'Competitive' and winning rounds on a select map. With this the player earns a lot more XP than if they were going to play on a normal competitive map and gives them a chance to experience all of the maps in the Operation. There are no new weapon collections with this Operation but owning the coin leaves players the chance to get drops from 6 different weapon collections exclusively during this Operation.

Operation Wildfire is scheduled to finish on June 17th, 2016. 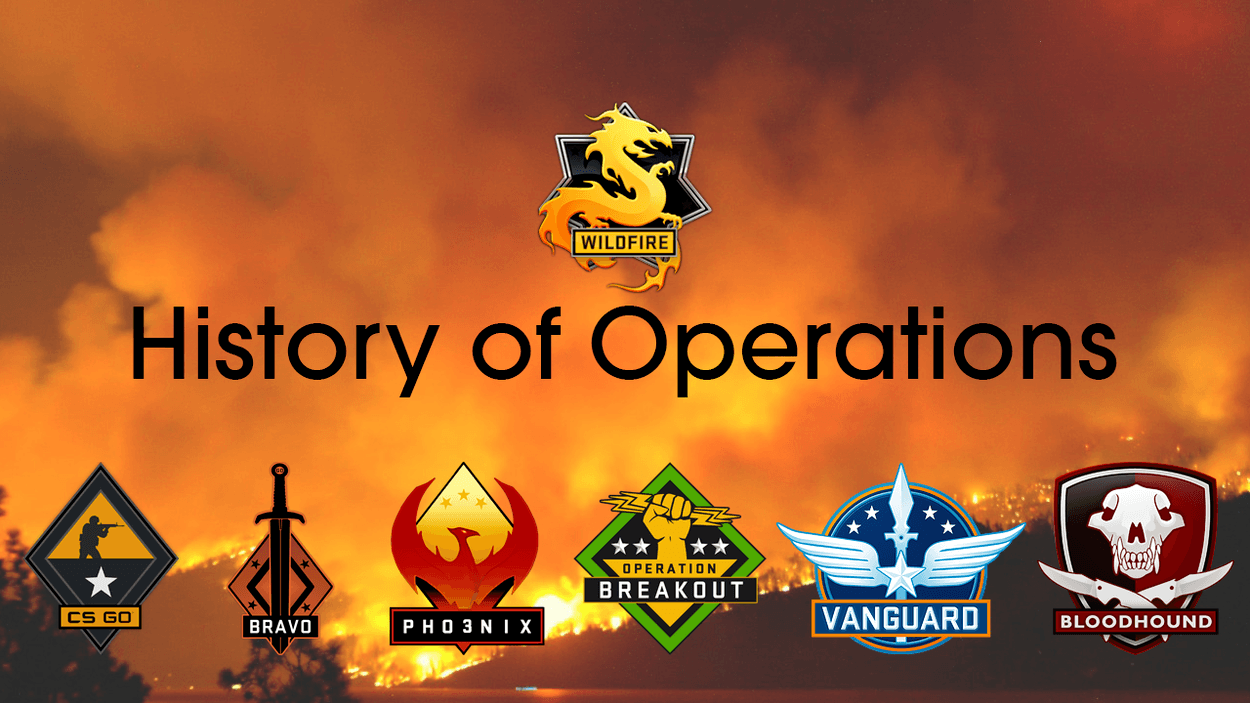