The Half Flip is arguably one of the most important mechanics for a player to master in Rocket League. It allows the player to have quick recoveries, consistent speed, and an overall versatile playstyle. Half flips are the fastest way of turning your car a full 180 degrees and will actually help you gain momentum going in the desired direction. In this guide, I will cover how to do a half flip, what situations to use it in, as well as other forms and variations of its core mechanic, the flip cancel.

How to Do a Basic Half Flip

Before you start flipping around without control, it is important to understand what is going on during a half flip. A half flip begins when the car is driving backwards.

Then they cancel the completion of the dodge, making the car only flip halfway through, so that the hood of the car is facing the ground. This is called a flip cancel. Flip cancels still allow the car to gain the same amount of momentum as a normal dodge, but without the car completing a full 360 degree flip. They are accomplished by pushing the joystick in the opposite direction of your dodge immediately after the flip begins.

Once the car completes its flip cancel and stops its flipping motion, the player uses air roll to rotate the car back onto its wheels, so that it is driving forward in the direction in which the car was initially driving backwards.

For the majority of players, it is particularly helpful to bind the ‘Air Roll Left’ or ‘Air Roll Right’ control to the left joystick. This makes the rotation after the flip cancel much easier. You simply have to press down the left joystick instead of pressing down your air roll button and then directing the joystick to flip it around.

What Situations to Use It

Half flips are perhaps the most useful mechanic to learn but knowing how to do one is only half of the battle. It is equally as important to know when to use a half flip. There are a few situations in which half flips are essential and failing to use one will most likely result in a conceded goal.

The most common situation in which to use a half flip is when the other team just cleared the ball past you and you have to get back to defend as quickly as possible. In this predicament, speed is everything. Turning around normally is too slow. A half flip, on the other hand, will allow you to turn around immediately while simultaneously accelerating you in the desired direction.

Another common situation half flips are used in is right after an attempted aerial shot in the opponent’s end. You need to get back to the midfield as fast as possible in order to maintain your team’s rotations and utilizing a half flip will accelerate you back into rotation. This allows your team to be able to send another player forward to contest the ball without leaving an open net for the opponents.

Other Forms and Variations

The only reason half flips are possible is because of the flip cancel. Using this move, players have experimented and found ways to apply it to many different types of shots and saves.

Flip cancels are frequently used in ceiling shots. Flip cancels let the player executing the ceiling shot stay upright, which gives them extra time to make adjustments to continue to follow up on the ball for a rebound.

<iframe src="https://clips.twitch.tv/embed?clip=RenownedUglyWombatPartyTime" width="620" height="391" frameborder="0" allowfullscreen="allowfullscreen"></iframe>
In this clip, we see Mariano ‘SquishyMuffinz’ Arruda using his flip cancel to stall his car’s movement, allowing him to make the necessary adjustments to hit the ball in the net.

Flip cancels are also used defensively. Players often find themselves in a situation in which they are forced to lunge for a ball speeding towards their net to make a save. However, upon using their standard dodge to make a reach for the ball, the car’s wheels will hit the side of ball and let it roll in because of the complete flip the car is trying to execute. A flip cancel will still give your car the same amount of momentum towards the ball but will take away the possibility of a wheel touch.

For a few extremely advanced players, the flip cancel is even used to get a flip reset off of the ball.

<iframe src="https://clips.twitch.tv/embed?clip=AverageBreakableNuggetsTBTacoLeft" width="620" height="391" frameborder="0" allowfullscreen="allowfullscreen"></iframe>
In this clip, the player uses the flip cancel to hit all of their wheels on the ball at the same time, granting a flip reset. This action is repeated multiple times, and the player ends up with a total of 4 flip resets.

The best way to practice half flips is by dissecting each the two parts of the mechanic and doing each one repeatedly until it becomes muscle memory. Go into free play and start driving backwards. Practice only the flip cancel section and let yourself get a feel for how long you have to hold the joystick in the opposite direction in order to make the car stop flipping. Then, once you feel like you have that part down, incorporate the air roll section, and practice in free play for as long as you wish.

Half flips are an essential part of medium to high-level Rocket League play and mastering this mechanic as early as possible will give you an advantage over lower-level players. It will greatly improve your game, and also add an increase in your overall pace of play.

To summarize the controls:

- Instantly after you press the jump button a second time, thrust your joystick forwards until the car completely stops halfway through its flip

Continue to practice this mechanic in free play, and soon enough you’ll find yourself doing half flips and flip cancels like it’s nothing! 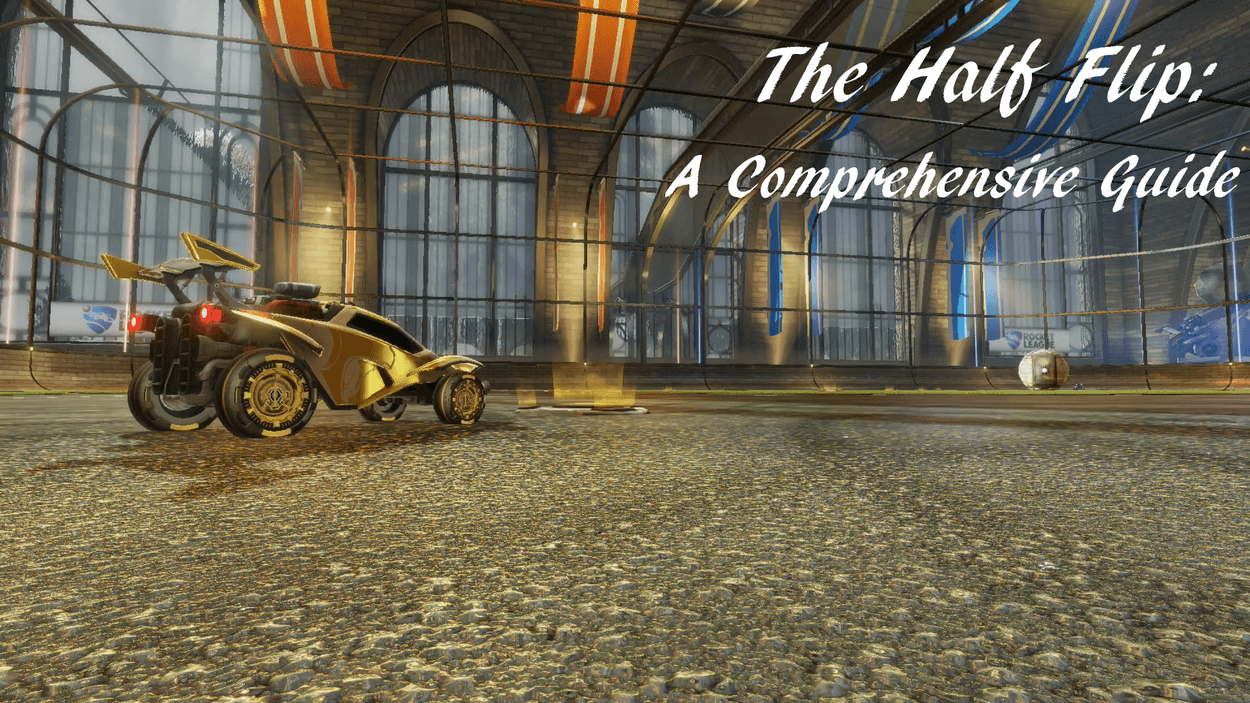