A powershot is one of the most useful skills a player can have on a Rocket League field. Powershots can be utilized in all areas of the field - on offense, passing up to a teammate, or getting a powerful clear that can allow you and your teammates to recover. They are especially utilized in 1v1s. Here's what you need to know in order to consistently hit powershots and catch your opponent off-guard!

As aforementioned, powershots can be useful in different areas on the field. Here are some situations where you can use a powershot:

The opposing team has been pestering your goal with shots over and over. Your team is low on boost, and you need some way to clear the ball down the field and stall time to get boost, maybe even launch a counterattack. A powershot clear is the easiest way to give your team time and relieve the pressure on your side of the field. A powershot clear would immediately place the ball on the opponent's side of the field.

This can also be a variation of the Powershot Clear. These passes can be clears from your side of the field to launch a counterattack before the opponent's team even realizes. A teammate could be cheating up the field while you do a Powershot Clear in his direction. More often than not, this will lead to your teammate getting an open shot on goal.

The Mechanics of a Powershot

There are multiple ways to get a powershot. Most players, when they mention a powershot, they either mean a powerful hit right after the ball bounces off of the ground or they mean a moving turn shot, where you are on the break on either side of the field and you get a little space and turn into the ball for a powerful shot. In general, a powershot is when your car hits the bottom part of the ball with the nose or the corner of your car, as those places will generate the most power. Here are three types of powershots that you can implement into your game.

1) Position yourself so that you and the bounce of the ball will meet at a common point.

This can occur in multiple situations. Whether it be a ball that bounces off of a sidewall or a bounce that occurs while you're dribbling, positioning is key. If you are dribbling the ball, distance yourself slightly on one side of the ball

2) Read where the ball will bounce.

This is the most important step of the Bounce Powershot. By reading where the ball will bounce, you can time your car's flip according the bounce. This will be the point that decides whether your powershot is a powershot or not.

3) Sideflip and use the corner or nose of your car to hit the ball immediately after the car bounces off of the ground.

This step generates the power that is behind the Bounce Powershot. By making contact with the ball using the nose or corner of your car right after the car bounces, the Bounce Powershot is complete. The lift that comes with the bounce of the ball and the momentum caused by your car will fling the ball across the field. Whichever way you sideflip into the ball will determine the direction of the powershot.

Here is a GIF of the Bounce Powershot:

The Ground Powershot is mainly used on an offensive attack. It's useful when you have control of the ball coming up either side of the field. It's as simple as the Bounce Powershot, but timing is everything in this situation. Since you won't be flipping your car, you can easily recover afterwards. Here are the steps to a good Ground Powershot:

1) Stay close to the ball while driving up the field.

This step is to maintain possession of the ball. Sometimes the opponent will try and rush you and the ball in hopes of a favorable 50/50 and to cut off a powershot.

2) When it is clear that the opponent won't rush you, begin to distance yourself from the ball.

If you dribbling the ball up on the left side of the field, begin to distance yourself on the left of the ball and vice versa for the right side. This space will be your turn angle on the ball.

3) Time your turn with the rolling ball. Turn into the ball, trying to hit the ball with the nose or the corner of your car without flipping.

In writing, these steps may be confusing. Here is a video from player amustycow that displays the Ground Powershot:

The Aerial Powershot is simple in concept but harder to hit consistently. It's basically the same concept as every powershot: hit the ball with the right place on your car and flip into it, gaining as much momentum as possible. In this case, it's in the air. Here are the steps to hitting a good Aerial Powershot:

1) Like the Bounce Powershot, position yourself to meet the ball in the air at the perfect time.

More often than not, the opportunity for an Aerial Powershot will come from a bounce off of a side wall. Position your car so that you can time an aerial perfectly. For example, if the ball is bouncing off of the left side wall – position your car along with the ball, in the direction for the goal. These situations are perfect for getting a quick shot on the net before the defense can recover.

2) Time the aerial in the direction of the goal.

If you go for the aerial too early, the powershot would only be towards the respective corner. If you go for it too late, the ball will most likely miss onto the backboard, far away from goal. By timing it perfectly, you can have the entire goal to work with.

3) Hit the ball with the nose or corner of your car, flipping towards the opponent's goal.

This step is basically the same as the Bounce Powershot, except it's an aerial. The momentum of the ball coming off of the wall into the center of the field along with your car hitting the aerial with the corner or nose of your car forward will allow the powershot to be directed towards your opponent's goal.

Here is a video from Iridium that depics the Aerial Powershot:

Powershots are an extremely useful skill to have, both on offense and defense. They are used to clear the ball and stall time, to pass to a teammate and launch a counterattack, and to shoot an unsavable shot on your opponent's net. In order to play at that next level, powershots are a must in your skillset.

Good luck in your next Rocket League game! 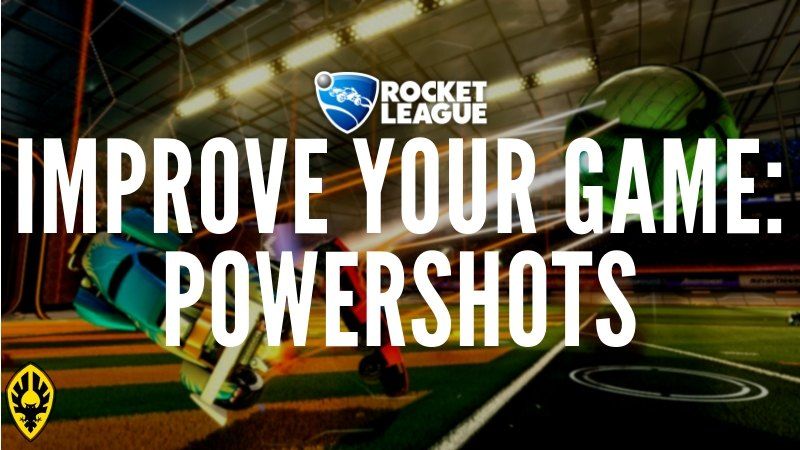