The Heavy Car "Bug" has plagued Rocket League players season upon season. For some odd reason, players report that their car will feel heavy and harder to move than before. It forces their gameplay to be slower, and thus, will result in more losses in ranked. Many players have dubbed the Heavy Car feeling a "Bug" simply because there was no other explanation for it. But the questions have to be asked: Why would your car suddenly feel heavy and hard to move? Why doesn't it feel as fast and light as it did in yesterday's ranked escapade? In this guide, I will record solutions found by Rocket League players that will hopefully help you.

NOTE: Not all of these fixes will necessarily work. Try all of them until one works!

What is the Heavy Car "Bug"?

In order to find the solution, we first must examine the problem. As mentioned before, the Heavy Car Feeling is when your car will suddenly feel heavier and slower than before. Turns will be less sharp and feel in slow motion. In the air, your car will air roll slower and turn slower. Even something as simple as a frontflip and a backflip will suddenly become 2x slower. It's not necessarily a bug, but more of a placebo effect. Psyonix clearly does not intend for this feeling to be found within games, but nevertheless, it is prominent.

Here is a video from the Youtube Channel "WILL" that proves the Heavy Car Bug exists:

How do you fix the Heavy Car "Bug"?

Mariano "SquishyMuffinz" Arruda and Kyle "Torment" Storer, teammates on Cloud9, are some of the most mechanically talented players in the world. Both have amassed quite a following both on Twitch and on Youtube. Their method is pretty simple in concept. From the main menu, follow these steps and directions.

These steps will load you into a five minute private match with just yourself, but the game speed as a whole will be slower. Your car, the ball, everything will be slower. Play around in this match for a few minutes and get used to the speed of the game. Once you leave the match and go into a different game with in a regular speed, your car will feel faster, and the Heavy Car Feeling that you had before will go away.

Reddit user u/Melander86 posted a guide regarding the Heavy Car Bug onto the Rocket League Subreddit 10 months ago. In this guide, he outlines his experience with the Heavy Car Bug and how he learned to fix it. He talks about how he figured out how to reproduce the Heavy Car Feeling, yet he explains that the Heavy Car Bug can only be reproduced on PC and not on Console. In short, instead of plugging in your controller in anything else, plug it directly into the motherboard.

He then goes to explain why this method works on PC. The back USB ports that connect directly to the motherboard delivers about 900+ mA. The front USB ports only deliver about 500 mA. This results in possible lack of power and thus, input lag and interference. Buy a longer USB cable for cheap and plug it into the back USB ports! You will see a difference in contrast to the front USB ports.

To read more about this, here is the link to the Reddit post: I have solved the so called "heavy car bug", and I'm able to reproduce it.

Youtube Channel "Sreko57" has a video where he outlines a fix to the Heavy Car "Bug" on PC specifically. It deals with the dead zone settings on the Steam Browser. Follow these following steps:

The Heavy Car "Bug" is not necessarily a bug. I consider it to be more of an unexplainable placebo effect. Psyonix obviously does not intend to have something as game changing as a heavy car feeling within Rocket League. Furthermore, the community has not found a way to fix it completely. With Season 9 just finishing, the "bug" is still a concept that players experience. These three solutions I mentioned, though they are the most reliable that I have found, they will not always work. If none of these solutions work, put down the controller, maybe come back to the game at a later time. Maybe at that point, it will feel normal. If you still want to get your Rocket League dosage in, just try to play through it and make your mind think that the car is moving at a normal speed.

Good luck in your next Rocket League Match! 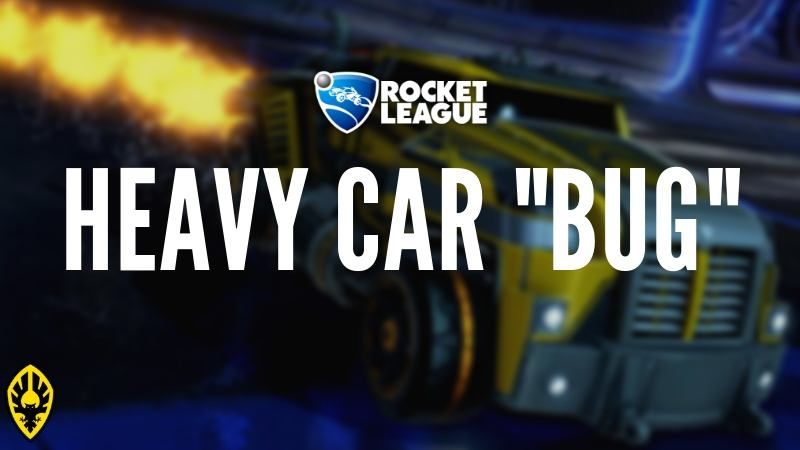