Dignitas LCS player Ersin “Blue” Gören took a break from his LCS prep to help us create a tier list of League’s most popular Mid Lane picks. Naturally, just as we did in Biofrost’s Support tier list, we want to preface this and say, if you master any Champion and focus on what makes them great while also adapting their style to the meta, you can climb on any pick that you truly enjoy. But, as it always does, the game changes and so that makes some strategies easier to pull off than others. So, with that said, let’s jump right into things! 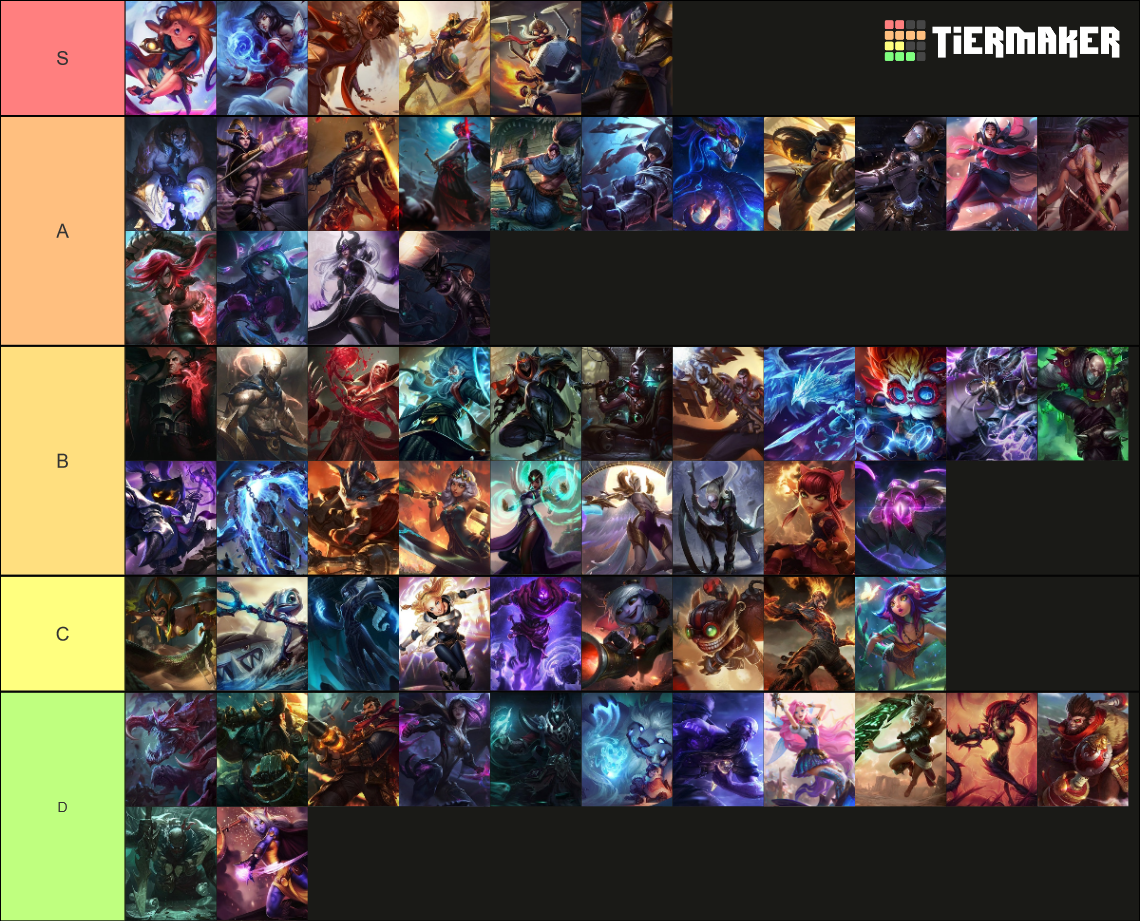 We’ll start first with the S-tier and work our way down! Keep in mind that none of these picks are listed within any inner-tier order, so don’t let that twist your opinions in any way!

So, to get us started, S-tier is naturally the cream of the crop. These are the picks that define Solo Queue right now or have the capacity to truly terrorize games with ease when mastered. On that note, what you’ll find different from our list in comparison to most is skill expression. A lot of the Champions here have higher ceilings than most tier-lists would like reference because we believe getting on these picks and learning them in and out will really take your game to the next level. On that note, we’ll let Blue define what makes an S-tier Champion and break down our first tier.

I would say, ‘What defines S-tier Champion right now is how they can push and move around the map really easily. Being able to get to fights and make picks is important in Solo Queue, so Champions that do this well like Ahri and Taliyah are very strong right now, in my opinion. After that, Champions that scale extremely well like Azir and Corki who can really take over teamfights in the late-game, since games can go long in Solo Queue. I also really like Zoe on this patch. I don’t think she’s in that bad of a spot and she does things that you really want to see out of Mid in Solo Queue, and the same goes for Twisted Fate who is just always good in Solo Queue in my mind because of his ultimate and map pressure.

A-tier takes a step down from S-tier but mirrors a lot of the same playstyles and impact of S-tier. What shifts these picks down can be quite varied. Things like predictability in playstyle, when the Champion comes ‘online’ through scaling, or even how the Champion pairs with or matches against other popular picks in Solo Queue from other roles. These picks are great if you main one of the S-tier selections and have that pick taken or banned away during the draft and you’re looking to mirror a similar style.

Though Assassins are much worse on the patch, Champions like LeBlanc, Katarina, Talon, and Akali are always going to be good in Solo Queue. Especially if you get a really good matchup. Their mobility and damage against squishies are still really high, and they can one-shot most anyone when they snowball. Especially Talon since he’s always going to get to a fight before his lane opponent, or he should. Solo Queue is harder for everyone to be on the same page, so these Champions can still do really well there. Champions like Yasuo, Irelia, and Yone are really good since the durability changes let them be more aggressive in lane since they can take more hits. They are pretty easy to farm on also, and scale really well. So, they are great options when you get good matchups. Lucian is probably the best blind-pick AD Mid you can play. He does really well in a lot of matchups and can be a flex pick in the draft also. Akshan also, but he’s less flexible.

Rounding us out are Sylas, Syndra, Orianna, Vex, and A-Sol. These Champions exist in a space where they do things that are highly valued in Solo Queue though they clearly have some more defined playstyles in the picks already mentioned or those that are within the S-tier. Sylas is particularly great in situations where there are multiple great ultimates that he can abuse, Sydra and Orianna play really well into lanes that they can bully early with their range and then scaling into either straight up damage or excellent utility, respectively. And Vex and A-Sol are just particularly good at shoving fast then closing a significant distance to reach fights across the map,

Champions in this tier, as Blue said, typically have the ‘right idea’ but are just a smidge worse at executing on that idea than the picks in the S or A-tiers. For example, take a Champion like Kayle. She’s known to be a monster in the late-game and has a very impactful fight changing ultimate, but when you compare her to picks like Azir or Corki from S-tier, or Viktor or Yone in A-tier, you’re trading off her higher impact late-game for less interactivity during the Mid Game. Essentially, she comes online later than these other picks that mirror her in this regard, or in her case in particular, she isn’t incentivized to be present during the Mid Game scenarios that really shape out Solo Queue games because she really wants to push for that game-warping late-game. So, for those reasons, she’s a smidge worse off than those other traditionally scaling minded picks. The same could be said for someone like Kassadin too.

For the Mage picks like Anivia, Swain, and Veigar, Champions within this playstyle really bank on their opponents making mistakes. And in our eyes what defines good Solo Queue Champions right now is the ability to dictate. While these picks scale extremely well and can really define the Mid to Late Game, they lack those key traits of movement and early dueling that we highly value for our higher tiers, and they typically require a bit more investment in the scaling department than the other choices that follow that pattern.

One more thing to say about the B-tier Champions, is you might have more situations with these Champions where opponents might not know how to play against them. Take Heimerdinger, for example. [He’s] always been kinda okay but got some recent buffs that Heimer players will know really. Taking this and your skill on the Champion can elevate them up since people will not always have the same experience since these Champions are not as popular as someone like Irelia or Akali, the more flashy picks.

C-tier and D-tier Champions are probably the weakest or hardest to pull off when it comes to finding success through the Mid Lane. What defines C-tier is the fact that most picks here are very counter-pick focused Champions, in the case of Cassiopeia and Lissandra especially, or they are flex picks from other primary lanes that can function okay in Mid and bring some wrinkles to the draft process. So, Lux, Ziggs, Tristana, and Brand primarily. Neeko and Fizz, in our eyes, are just a bit below average in terms of what they bring to teams and, again, are really defined by one-dimensional approaches. Some of this can be applied to D-tier as well for Champions like Riven and Wukong.

Otherwise, D-tier Champions are picks that are pretty much one-trick Champions or are really, really weak right now. Like, if you are a really good Pyke player, which I know of some really good Pykes in NA Challenger, you can make it work. But it’s just much harder than picking up another Assassin that can more easily do the same thing. Other picks have been flavor of the month through the season or are like Ryze and just need more buffs and adjustments.

There you have it, folks! Blue’s takes and insights on the Mid Lane pool of Solo Queue! Try out some of these S and A-tier picks and I’m sure you’ll find some immediate success after the training wheels come off!