A lot of us Rocket League players love the idea of making a sweet play in the air. We love the feeling of getting up to the ball faster than our opponents, adjusting our car in the perfect way, and sending the ball straight into the net. Defensive-minded players chomp at the bit to have an opportunity to go up to make a save right on the goal line, stuffing their opponents shot and sending them to the boost pads disappointed.

With the help of Dignitas’ own Jack “ApparentlyJack” Benton, we will be dissecting what goes into a good aerial play so that you can soar to brand new heights in your matches.

When Should You Aerial?

Before worrying about the mechanics behind an aerial, it is crucial to know when you should go for one. There will certainly be times where staying on the ground and saving boost is the best option, especially when you have identified that you have time to wait for the ball to come to you. Making sure your car is aligned correctly is important as well, so if you aren’t lined up with where you expect the ball to go, you may want to avoid going up entirely.

When asked to outline what situations call for an aerial, ApparentlyJack had this to say:

Rocket League is a game where decisions have to be made in a split second, so mistakes are bound to happen, but try to avoid wasting boost on an aerial when it appears that you won’t be able to make a beneficial play on the ball.

One of the more challenging aspects of aerials for a lot of players is reading how the ball is going to bounce off of the wall or ceiling. It’s pretty straightforward when the ball is casually floating in the air, but being able to read a fast bounce is going to give you a serious advantage over your opponents.

The faster the ball is going, the harder it’s going to bounce. Players don’t recognize this a lot of the time. Also, players should be taking their time with it. Take a longer time to read the bounce because a lot of the players, especially at lower to mid ranks, are going to miss it anyway. So, you’re going slightly slower, but if you make contact you’re going to be ahead of them anyway.

As ApparentlyJack said, when you are at the lower to mid ranks, you are often in a position where you can afford to wait and see what happens with the bounce. If your opponent is rushing to make a touch and misses, that is going to open up an opportunity for you to produce a clean, uncontested hit. If they do make a play on the ball, you will have stayed on the ground and saved your boost, allowing you to quickly get back in rotation to make a defensive stop. 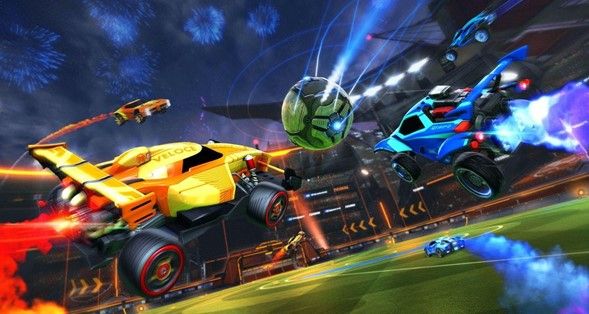 Like any situation in Rocket League, the way you position your car is going to go a long way in how effective you are in the air. A great aerial actually begins on the ground, as it’s important to make sure the nose of your car is lined up with where you plan to meet the ball. This will help you to use less boost and save you the trouble of having to make awkward adjustments.

Things can get a bit more complicated, though, when a teammate is involved in the play. Adaptability is key in this scenario because you want to be as available to your teammate as possible, but you also want to make sure you’ll be able to cover all of the bases if things don’t go smoothly.

You’ve got to face where you think you’re going to meet the ball, but you also have to cover the options. Obviously, you can see your teammate, but it could be a really high bounce, it could be a bounce off the ceiling, it could be fairly mid. But, you’ve got to choose which is more likely and stick with that. And then, be open to adapt. Position yourself facing your teammate, and then angle it to where the pass is going to come as they’re passing it.

In the end, what it comes down to is assessing the play. The most likely outcome may not be the most ideal outcome, so be sure to keep that in mind when you’re positioning yourself.

Air dribbles are one of the more satisfying Rocket League mechanics to execute. And while there is a certain level of flair to them, they can also be a dangerous tool to have in your arsenal. Even when they don’t result in goals, a good air dribble can cause the defense to panic, which will result in heavy boost consumption or a mistake. Plus, it may set up an easy scoring opportunity for your teammate. While air dribbling can be daunting at first, the best thing to do is to keep it simple. ApparentlyJack mentions this in his outline for a good air dribble:

You’ve got to be calm with it. You don’t have to go too fast. Control is often better than speed. And, don’t overcomplicate it either. Some players are trying to learn air dribbles and they see the pros do it and they’re going to be air rolling through the air dribble. But, you don’t have to do that. You can keep it simple.

Instead of focusing on the flair, focus on keeping the ball on the nose of your car as much as you can. This will result in you having a lot more options when it comes to shot placement.

Another important thing to note is that while you’re perfecting the air dribble, a lot of other players are going to be trying to do the same thing. Because of that, learning how to effectively defend an air dribble will go a long way in helping you climb.

A lot of times, players at the low to mid ranks, and even some of the higher ranks, will want to take their time with their set up. If you contest early, you may not always make contact with the ball, but you may either bump the opponent off of the ball or force them to go around you. Both of these outcomes will make life a lot easier for your teammate.

The air roll button can either be your best friend or your worst enemy when it comes to aerials. The best way to use it is to make small, quick adjustments to your flight path in order to line yourself up with the trajectory of the ball. However, over-adjusting can completely throw off your aerial, which will result in a lot of wasted boost.

You don’t have to overuse it, but it is good to use. Using it slightly is better than using it all the time. There’s an important thing to know about air roll – it slows your car down. If you’re going too fast, you can use [an] air roll to slow down and control yourself in the air. The best way to use it is to correct yourself. So, if you notice that you’re slightly off target, try and use it to get yourself back in line. That’s a good way to make sure you’re hitting the ball with solid contact.

It's also smart to use an air roll right as you are about to come in contact with the ball. Ideally, you do not want to strike the ball with the underside of your car, as this will result in a soft hit. For the most power, try to rotate your car in a way that results in a hit with the nose. This will create a more powerful, precise hit.

When to Learn Advanced Aerial Mechanics

After mastering the basics, it’ll be tempting to start learning more difficult aerial mechanics such as double taps and flip resets. When should you start working on these, though? ApparentlyJack weighed in with the following:

My answer would usually be whenever. If you’re having fun with something, you’re going to learn faster. But, from a straight game sense point-of-view, I’d say focus on the basics first – hitting the ball hard and trying to be fast. Naturally, it will come over time. It’ll come to a point where you realize you’re out-speeding your opponents and you have more time to go for these mechanics. Going for these plays, for a low rank, can often result in giving away possession or putting yourself out of the play. So, I’d say Champ 2 to Champ 3.

Aerials are a very important part of Rocket League, and as you climb up the ranks, it becomes more and more critical to make yourself a threat in the air. It takes time to master, but consistently applying these tips will make you better before you know it. If you would like to check out ApparentlyJack’s gameplay, be sure to check out his content on YouTube and Twitch. You can also follow him on Twitter to keep up with him.

Last but not least, for a better Rocket League experience, check out the HyperX Cloud Alpha headsets here. We hope this advice on aerials will help you on your quest to rank up!