VALORANT is a game that has agent variety, with different agents countering each other to balance things out, and some characters, regardless of reworks, that don’t quite find a places in the meta (sorry, Yoru mains). Thankfully KAY/O is a character that has found his place at the forefront of the current meta. Whether it’s his his ZERO/point being a suppressive beast in any situation, his FLASH/drive allowing him or his teammates to frag out, his FRAG/ment clearing corners and doing some damage at the same time, or his NULL/cmd allowing his team to take a site with no trouble, KAY/O is amazing right now.

Due to this, we decided to revisit this agent and make an advanced guide. If you’re interested in the basics, check out our earlier KAY/O guide from his release. To help us with this advanced guide, we’ve gotten advice from our Valorant team’s resident KAY/O main, Emmalee “EMUHLEET” Garrido. 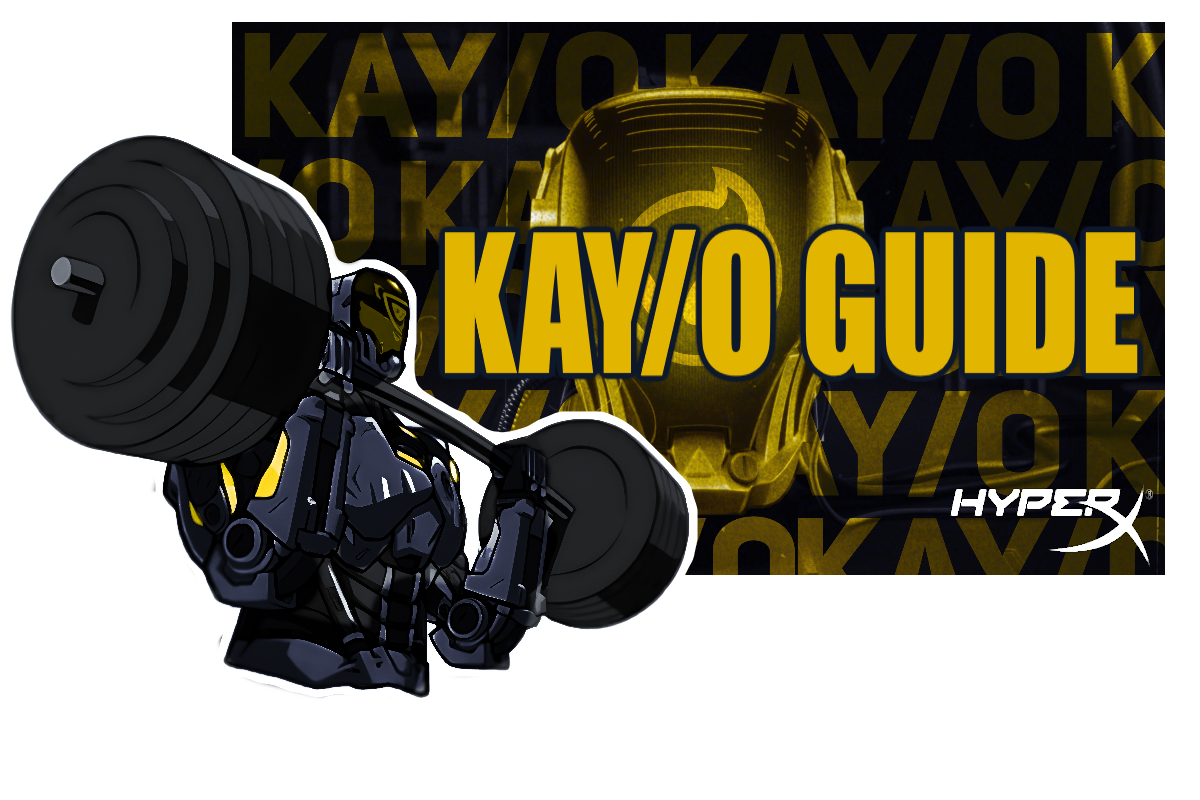 Okay, so, I kind of lied. We will be going over some basics, but only the most important parts.

1. Nades and Flashes have different trajectories depending on momentum. Moving forward makes it go farther, and jumping will make it go higher.

2. If you want your ZERO/point to go the farthest it can, look at a 45-degree angle. Any higher or lower will decrease its travel distance

4. Ping where you want your knife to go, so you can see where you need to throw it through walls. 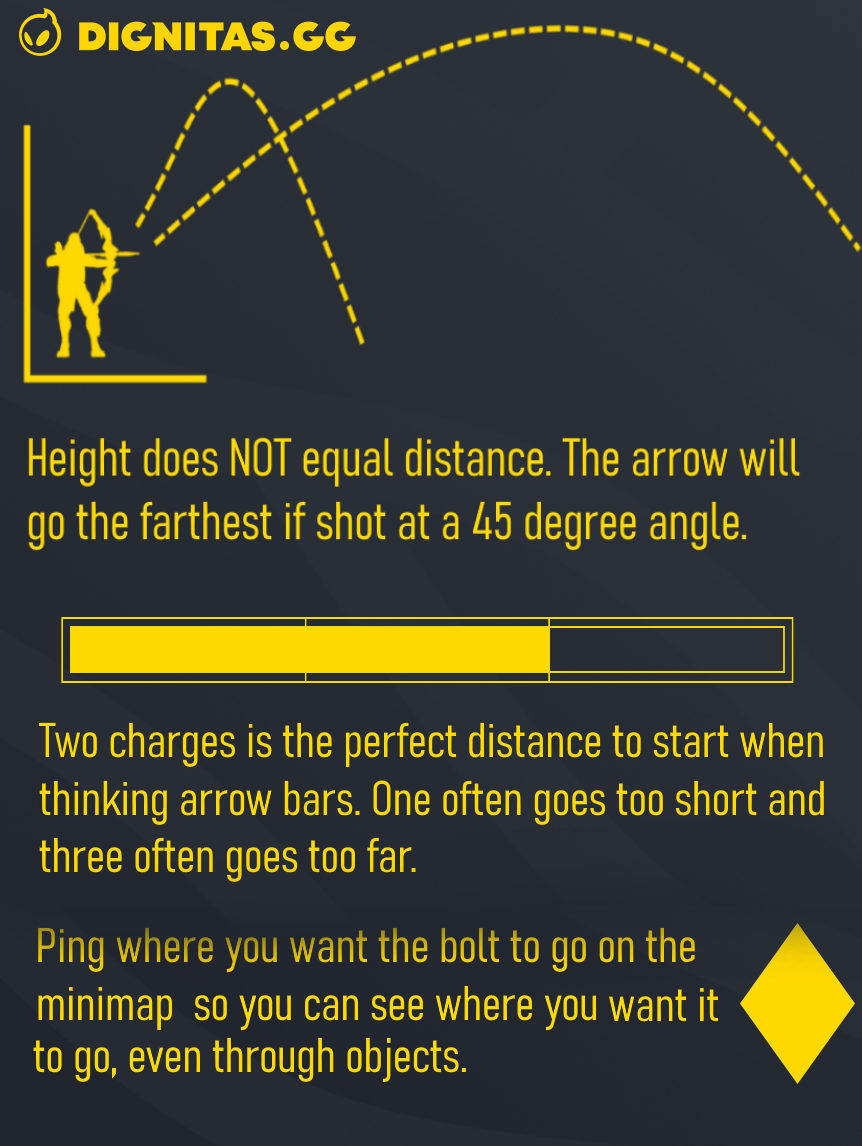 I Know My Lineups, But How Do I Play Him?

Great question! KAY/O is an initiator, I’m sure you knew that, but what does it mean to be an initiator? The initiator role is a tricky one because different initiators fill different roles. For example, Sova has no blinds and can only provide info, excluding his shock darts. Breach can blind, stun, and kill opponents with his utility, but cannot provide any info for his team, so they both play fundamentally different roles. KAY/O fits nicely in the middle of this initiator spectrum, providing info with his ZERO/point, but also providing offensive support with his FLASH/drive and FRAG/ment.

How should you use your utility to support your teammates? Make sure to throw your FLASH/drive through smokes or into the site so your team can get into site safety and enable them to get a kill. Use your ZERO/point to disable smokes and allow your teammates to enter the site without having to deal with any pesky utility. Finally, use your FRAG/ment to clear tricky corners so your Duelists can focus on killing rather than clearing corners.

Some games I have 20 assists in the first half by flashing for my teammates and using my knife, so that really goes to show that he is a support character.

Okay, so he’s a support agent, right? Yes, but also, you need to learn how to play him selfishly as well. The difference between a good KAY/O and a bad KAY/O is their ability to use their utility for their team and themselves, rather than just one or the other.

You need to figure out how to use KAY/O for yourself more often. If you’re going to play KAY/O, then don’t be afraid about always having to set up your teammates, sometimes try to be selfish and use your flashes for yourself in certain situations.

The key is to find a balance between the two: flash for yourself when you feel you can get a free kill but use your blinds for others when you think they are in an even better position than you. Always ask your team if they want a flash, and don’t be afraid to coordinate a play for them, saying “I’ll blind through the smoke, and you swing with me,” for example.

Talking about balance, we recommend using the HyperX Alloy Origins 65 keyboard for an optimized balance of compactness and functionality. A 65% form factor makes it more compact than a tenkeyless keyboard, while still offering arrow keys.

If you want to get good at KAY/O, you have to do the boring stuff. That means getting some nerdy lineups, like nerdy knife or nade lineups. There are so many that are useful, especially popflashes are very good, as someone coming from the Counter-Strike scene.

Throwing a crazy flash that blinds an enemy and killing them as they look in the completely wrong direction is, in my opinion, one of the most satisfying experiences you can feel in this game. So that begs the question, how do I throw a popflash?

There are two ways to create a popflash. One that is easy to do, and another which is harder to do, but much better in most situations.

First, Right-click throws. We talked about this in our basic guide before, so I won’t go super in-depth about it here. Chuck your blind and peek out behind the flash. This flash is okay for lower ranks, but in higher ranks they will probably just look away and not get fully blinded.

The second are Left-click Lineups. They’re a bit more complicated and will require some more explaining. There are two main traits that make a good popflash lineup.

To help you out, we’ll give you 3 popflash lineups for 3 different areas and scenarios. Use these as a template to come up with your own lineups!

1. No exact lineup, but a general spot, 90% of Flash lineups are going to be general spots due to them needing to be done quickly. This is for defenders trying to take space for their team. Just throw your blind at this wall in Showers on Bind, and it will pop right as it exits the door.

2. This is a blind for an attacker who is going to blind for his team. While their teammates are up Catwalk, you go on the stairs shown below, look into the arch, and throw your blind, allowing your team to take Catwalk.

3. This final one is an attacker's popflash that you can use for yourself and use pretty much anywhere there is a wall besides you. When you throw it at the wall next to where you will peek, the flash will pop in the same place as a right-click, but it’ll give you more time to prepare for the blind to pop and let you get your crosshair in the right place sooner. Here is an example if you are going to fight someone C-Long on Haven.

(As you can see, I have much more time to prepare for the fight using the second blind over the first, even though they blind the same way.)

Talking about flashy and stylish, the Alloy Origins 65 keyboard comes with HyperX NGENUITY software which lets you configure your LED design and personal lighting profiles, but also configure macros which might come in handy for your KAY/O lineups!

KAY/O’s Ultimate NULL/cmd is probably one of the best in the game. However, a problem I often see is that not many people know when the best time or place to use it is. To help that I created a graphic and guidelines of when to use your ultimate. 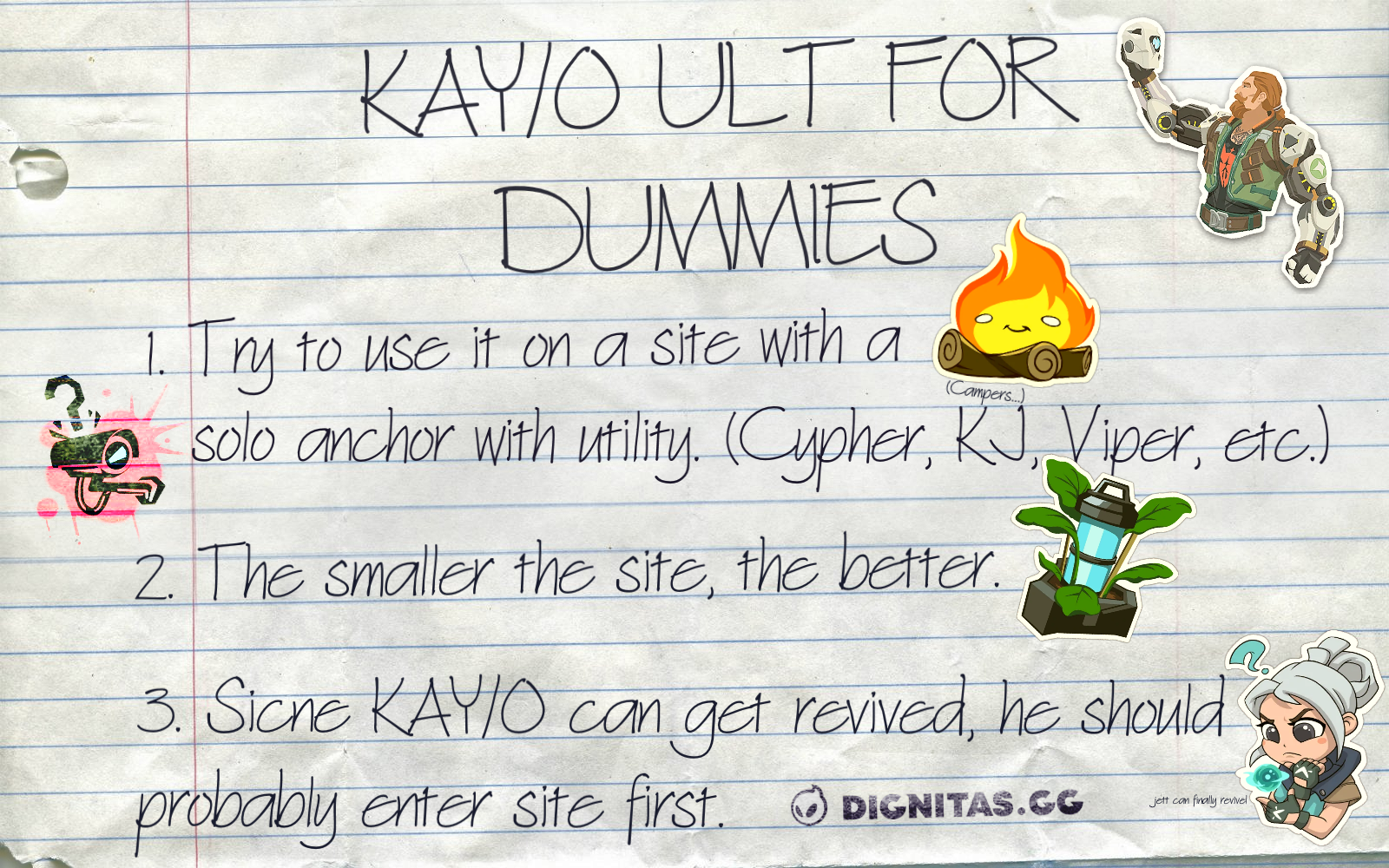 1. Sites with a Sentinel player or anchor player such as Viper or Astra can be a lot harder to get in due to their amazing stalling utility. It might be smart to use your ultimate on those sites, because without their utility they are pretty harmless.

2. KAY/O’s ultimate has a big range, but some sites are bigger, so try and pick a site that's smaller so you won’t leave any holes for a Sentinel to leave their utility alive.

5. Make sure to ALWAYS track the Enemy KAY/O’s ultimate status and tell your team when they have it, so they make sure to play retake or play passive and not rely on utility so heavily.

If you’re the one that’s using the KAY/O ultimate, try to use him like a Phoenix ult, so try to make him the entry. Let him go in first and bait him. Also sometimes save his ultimate for when you know the other team has ultimates available or when you know they are about to retake. It’s really about finding the right time and exceptions on when to use him.

KAY/O is a fantastic agent and an extremely versatile one. As long as you take the advice given here and look at my previous guide, you will have no trouble destroying lobbies and climbing up the ladder. Personally using this guide, I was able to easily stomp on Plat lobbies and I currently sit around high Immortal 2 to low Immortal 3.

Thanks to EMUHLEET for taking the time to talk to us. Be sure to check out her socials! 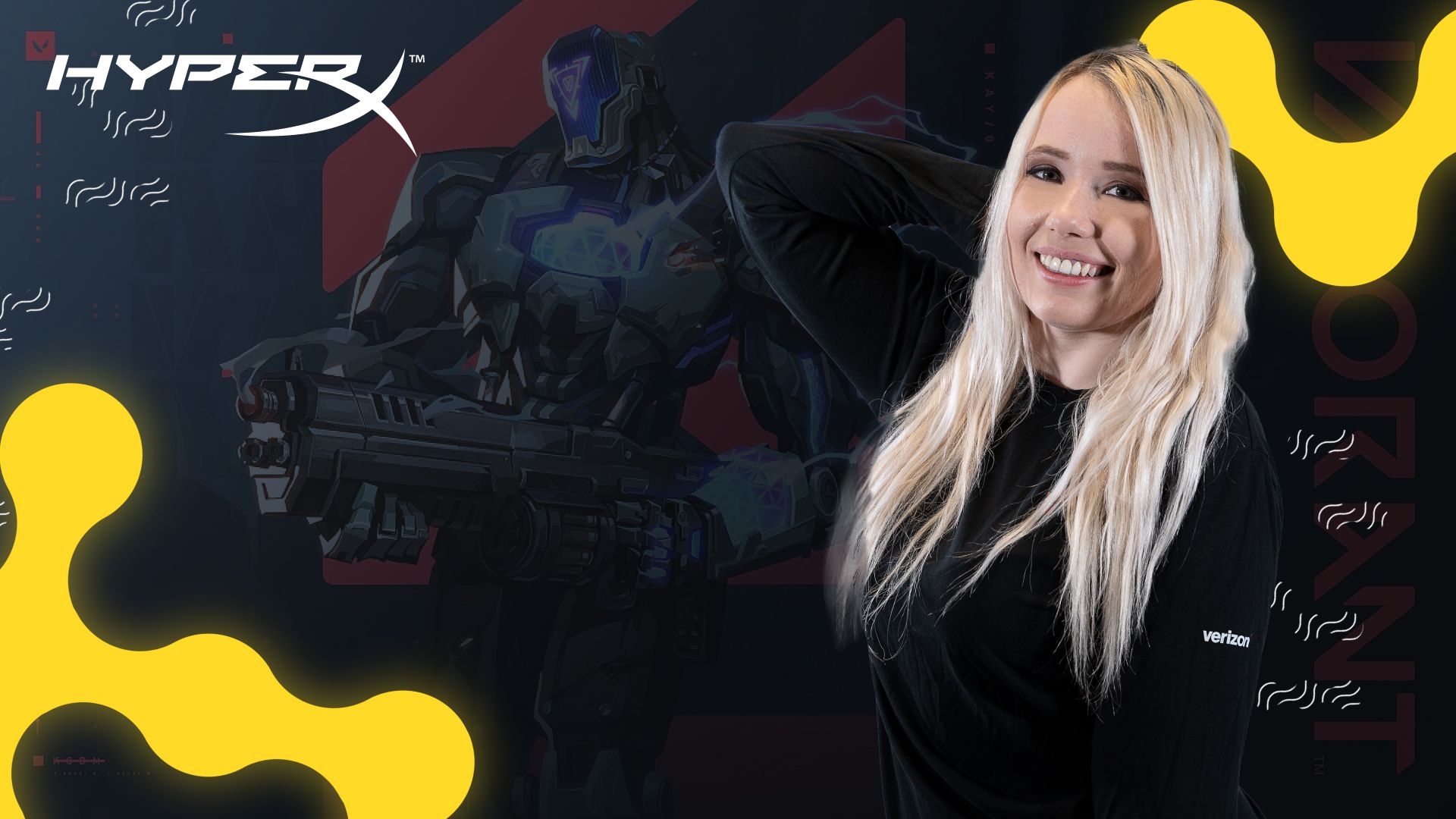