While it wasn’t the ending to HGC that Dignitas wanted, the boys took home a proud 2nd place in the HGC Finals at BlizzCon. After an impressive undefeated run in the Group Stages, Dignitas also cleaned up in both the Quarterfinals and Semifinals of bracket play to face Gen.G in the Grand Finals. Reminiscent of the HGC Mid-Season Brawl, and the rematch that both the players and the fans had been waiting for, the games in the Grand Finals were intense and even a little heartbreaking.

After the games and some time to wind down, Jérôme "JayPL" Trinh, Joshua "Snitch" Bennett, Jonathan "Wubby" Gunnarsson, Vilhelm "POILK" Flennmark, Kenn "Zaelia" Rasmussen, and Coach Nabby all agreed, it was a pleasure to play against Gen.G again. They were proud of a second place finish against such a formidable opponent. Even with the defeat, DIGHeroes have a great year to look back on.

Let’s have a look at some of the matches Dignitas played at BlizzCon, especially those nailbiter games from the Grand Finals.

Dignitas’ first series in the BlizzCon bracket was against Tempo Storm in the Quarterfinals. The team went into the series completely confident. In Game 1, Tempo Storm tried an extremely bold strategy, where they drafted Murky, Falstad, Samuro, Junkrat, and Abathur. But their attempt at catching Dignitas off-guard was quickly squashed. With a strong meta draft of Diablo, Raynor, Tyrande, Yrel, and Fenix, Dignitas made sure that neither Samuro’s sneaky plays to get the bottom Keep early, nor Murky’s laning pressure, got Tempo Storm any early advantages. Dignitas ended the game quickly in under 15 minutes, with a 12-1 score in kills and a 3-level lead.

With the precedent set that Dignitas would not tolerate any sort of cheese or off-meta picks, Tempo Storm decided to take away the Tyrande and Raynor for themselves. They also drafted Kerrigan, Arthas, and The Lost Vikings to allow for a roaming gank squad composition. But Dignitas applied the pressure with Snitch on Zeratul poking away at Tempo Storm and offering a lot of vision to thwart Tempo Storm’s rotations. As per the Dignitas strategy on Towers of Doom, the team made sure to hold both of the Bell Towers in the bottom lane and capture the Sapper Camps to get shots on the Core. In the final teamfight, Dignitas made good use of Void Prison to stop Tempo Storm from interrupting the Altar channel, taking the game and the series, 2-0.

Miracle came to BlizzCon as the 3rd seed from Korea but surprised everyone when they defeated Tempest in the bracket stage to advance to face Dignitas in the Semifinals. Dignitas showed their heavy priority for Tyrande in this series by drafting her in 3 out of the 4 games. Game 1 went to Miracle after winning a late-game teamfight at the objective. It was a close game throughout, but Sonya and Hanzo from Miracle proved to be a bit too much to handle.

Game 2 on Volskaya Foundry saw Dignitas with a more comfortable draft, with POILK on Tracer, Wubby on Blaze, and Snitch busting out Genji. Dignitas captured the first Protector and got themselves a lead in levels. As Dignitas snowballed their lead, Miracle struggled to keep up. An amazing fight at the healing camp showcased the patience and skill of Snitch on Genji. He waited for Miracle’s Sanctification from Tyrael to end, Wubby went in on Blaze with a Jet Propulsion that stunned three members of Miracle, and then Snitch went in with the X-Strike, getting the triple-kill. Dignitas ended Game 2 after a late-game kill on Miracle’s Yrel and a 3-level lead.

In Game 3 on Tomb of the Spider Queen, Dignitas brought out Greymane, a hero that does not see much play these days. Miracle got the first two Web Weaver phases, but Dignitas was able to defend and minimize the damage. But still Dignitas struggled, fighting from behind with a 2 level deficient. The turn around came after their first Web Weaver phase and an impressive teamfight win with clutch Bunker value from Wubby. With Dignitas’ second turn-in, they pushed in the top-lane without getting the Fort, but Miracle followed their disengage and Dignitas turned on them to get two kills. Dignitas grabbed the boss and pushed down the top Keep, getting some key kills that allowed them to take down the Core to win the game.

In Game 4, Dignitas was in complete control with great macro play and dominant teamfights. JayPL’s Wrecking Ball flips with Garrosh allowed for some pivotal kills with perfect follow-up stuns from Wubby on Blaze and Zaelia on Tyrande. With their first Curse against Miracle, Dignitas got a 3-level lead and two Keeps. They ended the game with a boss push in the bottom lane and a 14-0 lead in kills. Dignitas took the series, 3-1, and moved on to face their archrivals, Gen.G, in the Grand Finals.

Gen.G secured their spot in the Grand Finals after a surprisingly close series against Team Liquid. While they won the series 3-2, many believed that since Team Liquid was able to take some games off of the titan, Dignitas had a very good chance to get the series win against Gen.G in the Grand Finals. But it seemed that Gen.G had other plans, playing almost flawlessly in their games against Dignitas and punishing every mistake. Maybe Team Liquid was able to surprise Gen.G, or maybe Gen.G was saving their best for Dignitas. Even though Dignitas felt comfortable going into the series, having bootcamped in Korea against Gen.G before coming to BlizzCon, it seemed that Gen.G had also learned a lot about Dignitas during that time.

In Game 1 on Dragon Shire, Dignitas and Gen.G were pretty even in levels in the early game. At the level 12 mark, Dignitas won an important teamfight and was then able to gain control of the Dragon Knight. But as hard as Dignitas tried, their advantages didn’t seem to net much against Gen.G who always had an answer to keep the game even. With a late-game Dragon Knight for Gen.G, they pushed the bottom lane and got two kills against Dignitas, getting the Keep and then closing in on the Core for the win.

Game 2 was on Tomb of the Spider Queen and Gen.G drafted the infamous Alarak for Rich. Even with Muradin, Tyrande, and Blaze for protection, POILK on Gul’dan had a difficult game against the poke from Gen.G’s Hanzo and the threat of the Alarak combo. The early game was played very cautiously from both teams. Gen.G were able to secure the first Web Weaver phase and got a level advantage over Dignitas. Wubby’s Bunker plays with Blaze had saved them many times in previous games, but Gen.G had picked up on that. While they allowed Dignitas to draft Blaze, Gen.G decided to try out the unconventional Dragonstrike ultimate for Hanzo to combo with the Entomb from Leoric and guarantee a lot of damage output onto Dignitas. The pressure from Gen.G continued as the game went on and Dignitas struggled to gain control. Gen.G were relentless, they reached level 16 with a Web Weaver push and were able to take down two Keeps. After a messy teamfight that ended in Gen.G’s favour, they moved to the Core. Dignitas threw everything they had at Gen.G to defend the Core push, but Gen.G were able to take Game 2.

Game 3 was by far the most exciting game of the series. Dignitas pulled out a classic draft of JayPL on Stitches, Snitch on Medivh, Wubby on Kerrigan, POILK on Hanzo, and Zaelia on Tyrande. Dignitas started the game off with a bang, taking out hero after hero on the side of Gen.G with amazing Hooks from JayPL. The energy of the crowd was insane as Dignitas looked like they were taking complete control for the first time in the series. Snitch on Medivh was extremely important in the teamfights with Force of Will shields and portals to allow the rest of Dignitas to escape and surprise engage. Dignitas took the first Punisher, going in past the Fort to take out multiple members of Gen.G.

Dignitas continued their dominance into the late game. With a Punisher and a 2 level lead, they pushed past the bottom Keep. An intense teamfight erupted where Dignitas successfully got a kill against Gen.G. and with that one player advantage, Dignitas made the call to go for Core. But Gen.G were able to miraculously defend it to 3%. They marched over to Dignitas’ side of the battleground to push top Keep. Dignitas tried the best they could but were not able to defend. Gen.G took down their Core and won the series. It was an amazing set of games, and while many people questioned the final Core call from Dignitas, the team all believed it was the right move. Against a team like Gen.G, they knew they had to take chances and had to make plays because passivity would have just handed Gen.G the series.

Dignitas achieved an impressive HGC year, and 2nd place at the BlizzCon World Championships is something to be very proud of. Of course with the end of this HGC year, we say goodbye to our favourite tank player, JayPL. It was amazing to be able to see him play his legendary Stitches one last time in Game 3 against Gen.G and come out swinging. We hope you will all continue to follow the team as the new HGC season approaches. We’ll have more details on the upcoming season once they are available. Thanks to all the fans, until next time! 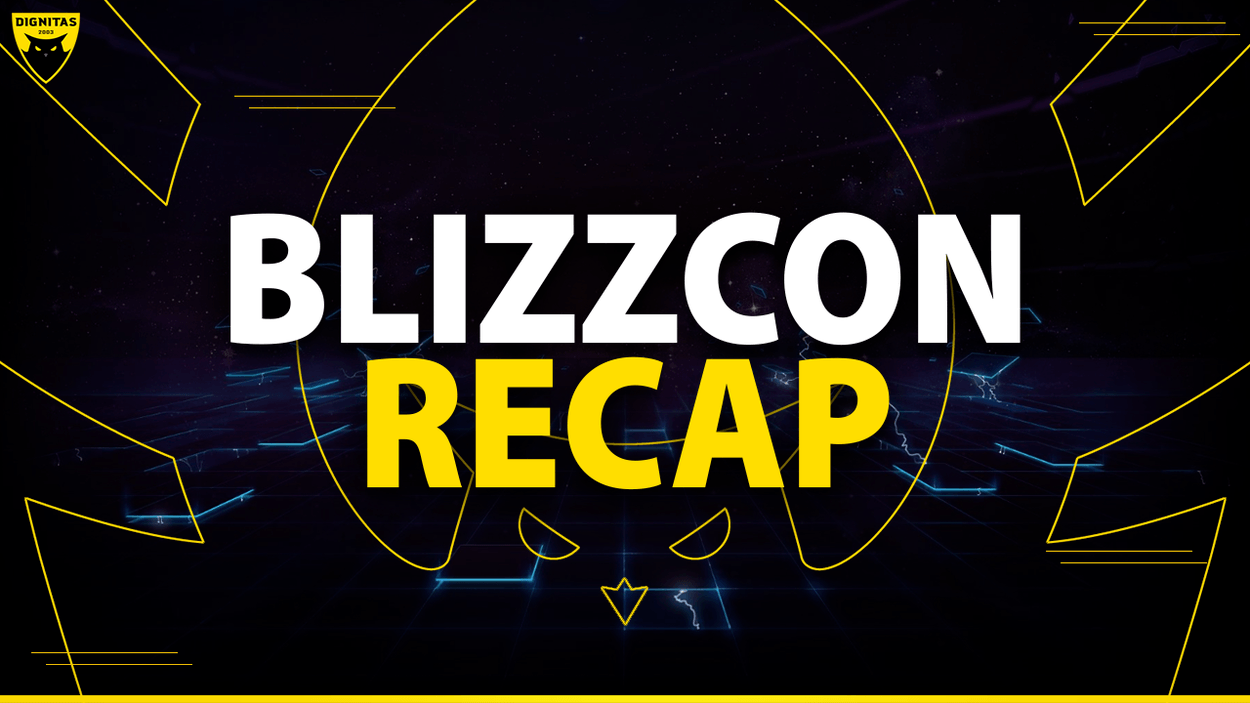