Last month, despite a promising early start, our European SMITE team finished fifth in the SMITE Pro League Season 3 Summer split. The players agreed that changes were needed in order to reach the playoffs in the Fall split, and so we had to say goodbye to our hunter iRens and solo laner TheDarkDodo.

Today we are happy to welcome two promising players to Team Dignitas! Jordan 'BigManTingz' Theaker and James 'Duck3y' Heseltine are joining our starting roster today as support and solo laner respectively. Along with this, our support player Suntouch will be moving over to the hunter role. Find out more about these changes in the statement below by Team Dignitas SMITE Coach Daniel Barnard.

"When we parted ways with Dodo, we started to consider what our other options would be. Collectively we came back to Duck3y, a player we had asked to tryout back when we decided on Dodo, who had at the time declined to stay with his CC team that failed to make SPL. We feel that he is and will be one of the top solo laners in EU/the world and we feel he is 100% a step up from what we had previously with Dodo. He is a strong mechanical player, knows when to rotate and has already developed good synergy with FrostiaK and the rest of the squad through our initial scrims + outside of Smite.

We thought a lot about who we could ask to replace iRens, and the thoughts of BigManTingz came about from Suntouch who said he felt that BMT is one of the best mechanical players in SMITE, and after asking him if he would be interested in trying out for the ADC role he was up for it. So we scrimmed for a few days with that lineup, but we were still coming across problems with the core three of Sun, Shadow and Frosti, and growing frustrated Sun asked if Bigman would mind supporting for a day of scrims, so we could see the differences in playstyles of support and see where / if Sun was going wrong. As you can see from the announcement, it worked better than the initial idea and so we stuck with it for a few more days, then the next week of scrims; with Bigman’s playstyle improving our play incredibly and thanks to his communication we now finally have a dedicated shotcaller, someone who the guys have faith in and actually listen to the calls, and from watching their scrims the difference is extremely notable in terms of teamfight precision.

Suntouch moving to ADC is not something we are worried about. He is a consistent player who won’t lose his cool or be overcome by nerves, plus his intelligence as a player means that he will not be out-rotated, and can be relied on to not lose his lane and can carry when the resources are provided for him to do so. He has already proven to be more consistent than what we had with Rens, and given time his experience and game knowledge will even further benefit the team as he acts as a sort of leader - he is the eldest in the squad, and has been playing comp smite for a very long time." 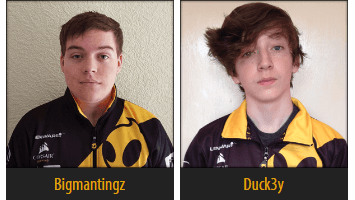