Perhaps the most valuable agent in the current VALORANT meta, Sova brings an incredibly wide array of abilities to the table in each and every match. With the ability to gather intelligence, scout out areas of the map, and even deal damage around corners and walls, Sova’s kit is a necessary factor to account for whenever building a VALORANT team composition.

In this guide, we’ll detail everything it takes to master Sova. With a little help from Psalm, Dignitas’ resident Sova main on our professional VALORANT roster, we’ll cover the ins and outs of the agent, what makes him strong in the current meta, as well as how you can utilize his strengths in your climb up the VALORANT ranked ladder.

If there’s one thing that Sova excels at in comparison to nearly every agent on VALORANT’s roster, it’s the ability to gather information on the enemy team during the heat of a round. Between his Owl Drone and Recon Bolt, he’s able to know the location of the enemy team without even having to come face to face with them.

Psalm: “Sova is your premier intel-gathering agent on both attack and defense. Whenever you have an agent that can gather info for your team, they’re going to be imperative.”

Sova’s ability to gather information outranks all of the game’s Sentinels and utility-based characters. Whether Sova is on offense or defense, his wide array of recon-focused abilities allow him to put his team in a position where an information advantage is almost inevitable.

Additionally, when you combine Sova’s kit with other intel-gathering champions like Killjoy and Cypher, your team is going to be eligible to learn almost everything there is to know about the enemy team during the course of a round. If you have Sova alongside one of those sentinels, try and separate them by sending them to different sites - particularly on defense. If you stack your information gatherers, you’re leaving one site completely in the dark. Spreading your resources around the map as efficiently as possible is always a major part of what makes any VALORANT team successful.

In comparison to other characters like Cypher and Killjoy, whose intelligence-gathering abilities are focused mainly on the defensive rounds of a game, Sova can make great use of his kit at any point in a game. Notably, you should be using Sova’s Recon Bolt and Owl Drone either prior to a push on offense, or while holding an angel on defense.

The timing of your abilities is always going to be more important than the simple fact that you’re using them. To further that point, though, the versatility found in Sova’s abilities is a huge part of what makes him a strong pick in the greater landscape of the game. There are going to be very few times where trying to gain information isn’t going to be worth it. In almost every scenario, you’ll learn something from shooting off a quick Recon Bolt or scouting out a site with an Owl Drone.

Psalm: “In a tactical FPS, or any competitive game for that matter, information on the map is everything.”

When it comes to information, Sova is king. Vision is hard to come by in VALORANT, but with a timely combination of a Recon Bolt and Owl Drone, Sova players will be able to give their team enough info to act accordingly round after round. Perhaps the most important factor when it comes to gathering vision on Sova is going to be when you use your abilities. Simply casting a Recon Bolt at the start of a round and calling it a day isn’t going to cut it.

Preferably, you should throw a Recon Bolt towards the enemy team to see where they’re playing a few seconds after a round begins. Allow the round to develop before blindly throwing a bolt towards a typically-played position.

Depending on whether or not you get confirmation on their position will determine if you should use your Owl Drone. To be safe, there should be a bit of a gap between your Recon Bolt and Owl Drone usage. If you use both of these abilities in quick succession, you’re limiting your options throughout the course of a round. Blowing your two major info-gathering abilities at the start of a round really hinders your chances to get more information in the later stages of that round.

Sova is one of the most unique characters in VALORANT when it comes to positioning, as his kit doesn’t require a direct line of sight on the enemy team in order for it to be effective. In many scenarios, Sova players will be able to stay completely hidden from any opposing players while still getting maximum value from the character’s set of abilities.

Ideally, you should be utilizing the feature that allows Sova’s arrows to bounce off of walls in order to give yourself a chance to figure out where an enemy might be. If you’re pushing on offense as Sova, you should take some time to think about the enemy team’s defensive setup from the previous rounds. Shooting a Recon Bolt around a wall in the general direction of where they played last round might give you some info for an upcoming push. On offense, you should try your best to stay behind your teammates, as Sova doesn't need to be in the frontline of a gunfight to gain information. Playing slowly and gathering information one bit at a time is going to be your best bet when it comes to positioning. Try to always take advantage of Sova's ability to remain completely hidden while gathering information for a push.

If you’re playing Sova on defense, you’ll be able to play extremely far back and shoot off a Recon Bolt without any potential risk. The bolt travels so far that Sova doesn’t even have to be anywhere near its location when it lands to get maximum value out of it. A great Sova player can even hold down one angle of a site with his natural vision, while the Recon Bolt can be bounced off of walls to get intel on where enemy players are pushing from. Ideally, Sova can get information on multiple angles and entry points through a combination of his recon abilities and weapon usage. While he can't necessarily solo-hold sites like Killjoy can, Sova can still obtain enough information to stand a chance on his own.

The most signature piece of Sova’s kit is most definitely his Recon Bolt. If there’s a Sova in your game, he’s sure to set off a Recon Bolt every single round. The ability is so dominant that it can give Sova information on the enemy team’s position no matter what. The bolt can either reveal enemy agents or get destroyed, which would confirm any suspicions you might have had about your enemies’ locations.

While other agents like Cypher and Killjoy bring stagnant forms of information to the table by way of their cameras, traps, and turrets, Sova’s Recon Bolt is an ability that can travel with him at all times. This sort of versatility is what makes Sova such a dominant pick in the meta right now.

Additionally, it’s important for Sova players to also be a little sneaky with their information gathering. If you shoot a Recon Bolt directly onto a site or generally out in the open, there’s a good chance it’s going to get destroyed. On that same note, your Owl Drone will be equally ineffective if you aren’t able to keep it quite literally under the radar. Since the enemy team can destroy your remote abilities before they have a chance to give you information in some situations, you’ll want to make sure to place your recon-gathering tools in places where they’re not going to get immediately shot down by the opposition.

If you hear footsteps coming from around a corner, there’s no need to shoot a Recon Bolt around that corner to receive confirmation of the enemy’s position. If anything, you should consider shooting the bolt in the opposite direction of the footsteps to see if there’s going to be some sort of sandwich-style flank coming your way.

Bouncing your bolts around corners and flying your drone tightly around walls are usually good ways to make sure that you get peak value out of Sova’s intel-based kit. Simply throwing your abilities straight down a long corridor is a surefire way to get minimal or even zero value out of them. A player with quick reaction times can look at a Recon Bolt on the ground and shoot it before Sova learns anything about their positioning.

Psalm: “Owl Drone can spam entire bomb sites and know exactly where people are playing. There’s so much flexibility and mobility to Sova’s kit. You’re going to have so many opportunities to give your team information”

As Sova, try to use Recon Bolt as a prelude to Owl Drone. Since the bolt is vaguer and tells you less, you should think of it as a bit of a teaser to all the information that Owl Drone can give you. Sova’s Recon Bolt is extremely versatile and should tell you most things you need to know, but if you ever need confirmation, Owl Drone is an amazing way to be certain of any suspicions.

It’s imperative to always keep in mind that playing Sova - and using his abilities to gain the upper hand on your enemies’ position - is less about spamming your abilities and hoping for a blind correct guess, but more about strategically timing when you use your abilities for maximum value.

Psalm: “Timing is extremely important when gathering info.” He goes on to say that “if you gather info when it doesn’t really matter or when you don’t need it, you’re just wasting Sova’s kit.”

Sova’s ultimate is best used once you have confirmed knowledge of the enemy’s position. Shooting blindly through walls is never a good idea, and frankly, it’s more of a waste of your ultimate than anything. Look to use Sova’s ult to pick off an enemy player in a state of hiding or retreat, as well as when you have knowledge of an enemy’s position on a spike site.

The best guns for Sova - outside of traditional rifles - are long range weapons like the Marshall and the Operator. Since Sova can use his abilities from so far away and still get maximum value out of them, it’s not really necessary for him to be up close and personal with the enemy team. There’s nothing wrong with using a reliable weapon like the Phantom or Vandal, but if you feel comfortable enough on a sniper, Sova can definitely excel from long range.

Finally, if you’re looking to expand your agent pool and get a grasp on characters with a similar playstyle to Sova, a support-centric agent like Breach wouldn’t be a bad choice to pick up. Additionally, info-gathering Sentinels like Cypher and Killjoy would be worth looking into, as well. 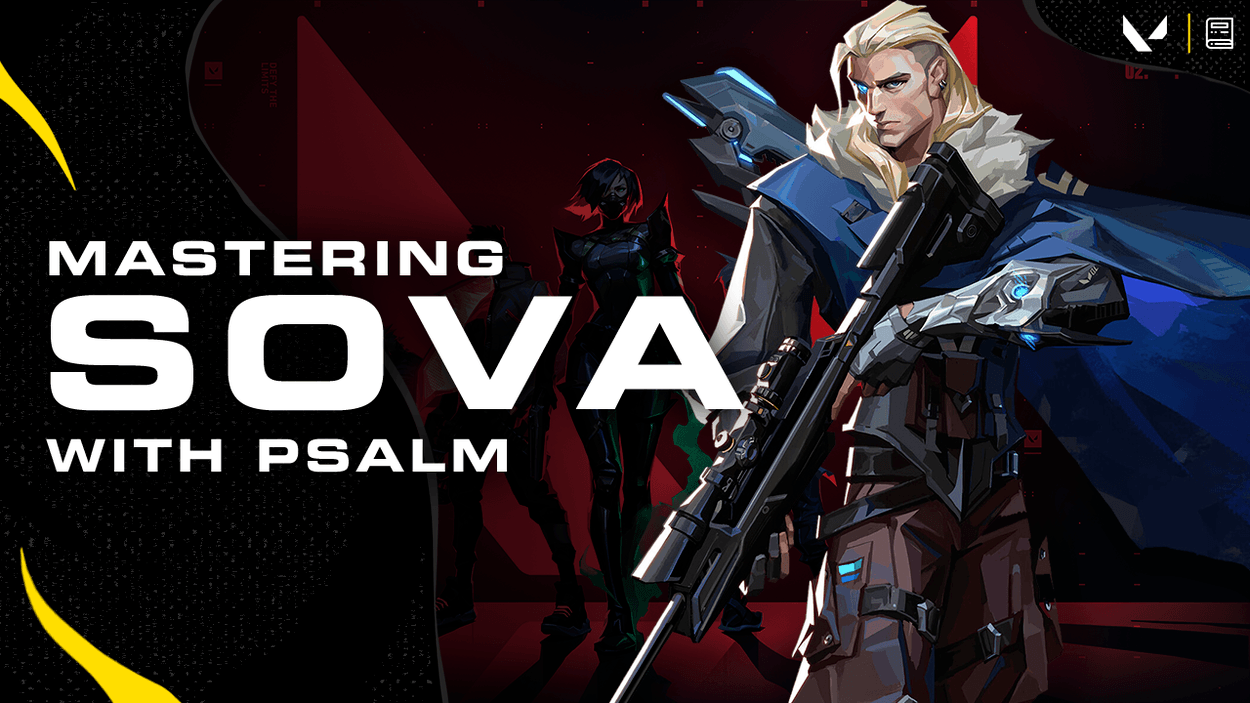